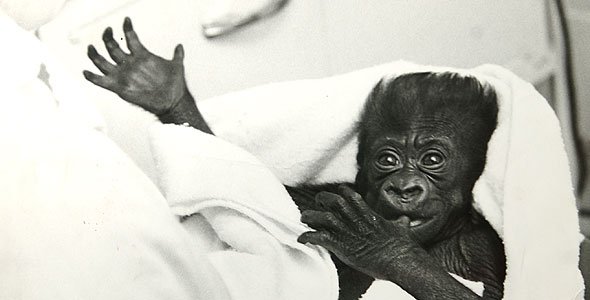 For decades after people first tried to keep gorillas in captivity, any gorilla’s path from the forest to the zoo was soaked in blood. As NATURE’s Snowflake: The White Gorilla shows, the animals had to be captured in the wild when they were young — before they grew too big and powerful to handle. Hunters would first have to kill the baby’s parents and sometimes its entire family.

This gruesome situation began to change in 1956 when a zoo in Columbus, Ohio became home to the first gorilla ever born and raised in captivity. Her name is Colo, and “she almost didn’t make it,” says Jeffrey Lyttle, author of Gorillas In Our Midst, a book about the Columbus Zoo gorillas.

“At the time, the zookeepers knew that Colo’s [mother] was pregnant, but nobody knew the gestation period of a gorilla,” Lyttle recalls. “They thought it was nine months, like humans, but it turns out it is closer to eight and a half months. So they weren’t expecting the birth. A vet named Warren Thomas was making his morning rounds when he discovered Colo, in her amniotic sack, lying on the concrete floor of her mother’s cage. He reached in, tore open the sack, and began giving Colo mouth-to-mouth resuscitation.”

Luckily, the little gorilla lived. “It was huge national news,” says Lyttle. But zookeepers believed that Colo’s mother wasn’t up to the task of raising her baby. They were probably right, since many captive gorillas never had a chance to learn parenting skills from their own parents in the wild. “So Columbus built a special nursery for her,” Lyttle explains. “Zoo visitation went through the roof. They would dress Colo up for the holidays — put her in an Easter bonnet and fancy dresses. Some people say she still likes to wear her food dish as a hat because she spent so much of her infancy wearing hats.”

A dozen years later, Colo gave birth to her first offspring, and she has since had several more; in NATURE’s Snowflake, viewers get to meet Dotty, Colo’s great-granddaughter.

Much has changed in the years between Colo’s and Dotty’s births. More and more, captive gorilla babies are being raised by their own mothers as zookeepers learn how to re-create more natural conditions. In cases where the mother still may not be able to handle the job, they have developed sophisticated surrogate parenting programs, where the babies spend a short time with human caregivers and then are quickly given to other gorillas to raise.

“Surrogacy has been extremely successful,” says Lyttle. “It was risky at first. These are very valuable animals, and there were these ideas that introducing an infant into a troop [a clan-like group of gorillas] could provoke violence. But the keepers believed surrogacy would work, and it has. It really shows how much our ignorance about gorilla social life has changed.”

Indeed, surrogacy has helped end much of the trade in wild gorillas. Today, about half of all gorillas that live in captivity are like Dotty — born and raised in a zoo, not torn from their families in the wild.

Voyage of the Lonely Turtle
Dolphins: Spy in the Pod | Part 2
Super Cats: Episode 1 | Extreme Lives
Deep Jungle: The Beast Within
The Elephants of Africa
My Congo