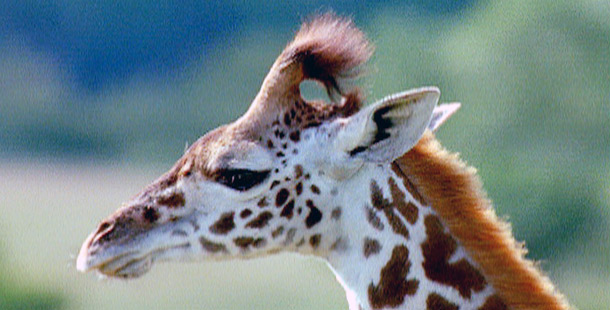 Moving a giraffe is a tall order. When populations grow too large for the available habitat, or farmers want the animals off their lands, African governments and landowners increasingly seek to move the animals to other, more hospitable, lands. But rounding up and moving a giraffe takes an extraordinary level of skill, planning, and teamwork, as Tall Blondes shows.

Leading these “translocation” efforts are a special, new breed of giraffe wrangler. These men and women — often wildlife biologists or veterinarians — are used to working with wild animals, and are trained in using everything from helicopters and dart guns to special high-rise trucks and sky-scraping movable walls, to corral the stately animals.

While not all roundups follow the same script, one shown on Tall Blondes is typical. The wranglers use small helicopters to spot and then drive the giraffes toward a special, funnel-shaped walled pen made from enormous tarps. As the giraffes travel down the high-walled funnel, the wranglers block the passage behind them by pulling tarps across — much as you might close doors behind you as you walk down a long hallway. Eventually, the giraffes enter a narrow passageway leading to a waiting truck — specially constructed to hold the ultra-tall cargo.

Such tight quarters can be dangerous, since a sharp kick from a large giraffe could easily land a wrangler in the hospital — or even a grave. That’s why some wranglers use special medicated darts to temporarily tranquilize a giraffe if it has to be captured in an area where building a trap might not be possible.

One of this new breed of giraffe wranglers is Petronel Nieuwoudt, Director of Deepgreen Safaris and The Game Capture School, a South African firm that relocates wildlife and sometimes takes paying clients along for the adventure. Nieuwoudt recently answered a few questions for NATURE, just before setting out on an expedition aimed at moving several giraffes.

NATURE: How did you get involved in giraffe translocations?

Petronel Nieuwoudt: I was an officer in the Endangered Species Protection Unit of the South African Police Service, and I decided to start my own company at the end of 1999. The giraffe is absolutely my favorite animal. I was totally hooked after my first experience, capturing a giraffe in the desert. Giraffes are much more than an animal. They show emotion, and once you touch or handle these animals, you fall in love with them. On two ocassions I’ve seen giraffes cry — that was devestating. I am glad we could help them.

NATURE: How many giraffes do you round up in a typical year — and who asks you to move them?

NATURE: How much does it cost?

NATURE: You leave in a few days for a translocation roundup. What’s happening?

PN: We are going to move two giraffe cows. One farmer bought them from another, and we will take care of the capture, transport, and release.

NATURE: Which are easier to roundup — males or females?

PN: It is not really a question of males or females. Generally, smaller, younger animals are easier to handle, transport, and move. The big males and females are really difficult. We will think twice before trying to move a big, dark giraffe male. They are extremely strong animals. You can never underestimate them.

NATURE: Do things ever go wrong?

PN: Sometimes things do go wrong. We are working with wild animals — not trained zoo animals. The vet once darted an animal through the tail and we had to dart it again. Sometimes the animals are not in good [health] and you have to take extra care. Sometimes they lie down in the truck and you have to get them to stand or let them go. I could go on for hours. But if you work with an experienced veterinarian and game capture team you minimize the risks.

NATURE: What do people think of your work?

PN: They think I have the most wonderful work in the whole world. And for me? Every day I am working with these magnificent creatures. I feel like I am doing my bit to save the world. I wish everyone could see and experience the compassion that everyone I work with shows toward these animals.

More From Tall Blondes (3)
Explore more from this episode More