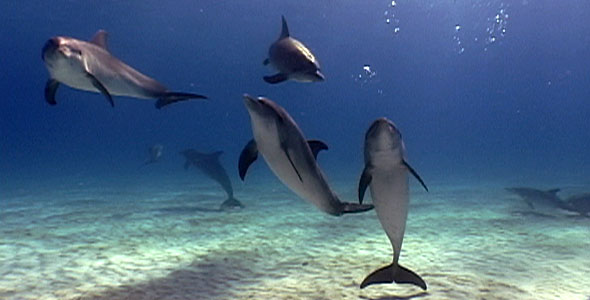 Dolphins use sound to detect the size, shape, and speed of objects hundreds of yards away. Fascinating and complex, the dolphin’s natural sonar, called echolocation, is so precise it can determine the difference between a golf ball and a ping-pong ball based solely on density. Although humans have researched these intelligent marine mammals for decades, much of their acoustical world remains a mystery.

One of the keys to dolphin echolocation is water’s superb conduction of sound. Sound waves travel 4.5 times faster in water than they do in the air. Dolphins use this to their advantage, in ways that would make a superhero envious. Using nasal sacs in their heads, dolphins send out rapid clicks that pass through their bulbous forehead, or “melon.” The sound is focused, then beamed out in front of the dolphin. The sound wave speeds through the water, bounces off the object under investigation, and is reflected back to the dolphin. Fat-filled cavities in the dolphin’s lower jaw receive this information and auditory nerves conduct it to the middle ear and brain, where an acoustic picture is created.

Scientists say that dolphins may also use clicking to communicate with one another. Although dolphins do not possess vocal cords, they still “speak” using sounds such as whistles, squeaks, and trills. A mother dolphin may whistle to her newborn for days, apparently to imprint a signature whistle upon her baby that will enable it to recognize her. It is believed that dolphins use whistles to identify one another and possibly for other functions, such as communicating strategic alerts while hunting in a group, but scientists have yet to crack the code. Many doubt, however, that dolphins have a formal language akin to that of humans.

In the 1950s, researcher John C. Lilly helped pioneer the systematic study of dolphin vocalization. A strong advocate of interspecies communication, Lilly wrote several books about dolphins, inspired the film Day of the Dolphin (1973), and was a supporter of the Marine Mammal Protection Act of 1972. Another pioneer of dolphin research, Kenneth S. Norris, first obtained evidence of dolphin echolocation by blindfolding a bottlenose to test its ability to locate an object underwater.

Since the 1960s, American military scientists have studied dolphins, and have trained them to perform such tasks as attaching explosives and eavesdropping devices to enemy ships or submarines. In the mid-1980s, the U.S. Navy began training dolphins to search for mines using their echolocation. In 2003, dolphins were deployed for the first time in a real war situation to probe the seafloor for mines near the Iraqi port of Umm Qasr. For decades, animal activists have opposed the use of dolphins for entertainment or military activities, citing questionable training methods and the stress-related illnesses, such as ulcers, that the animals can manifest in such situations.

Dolphin advocates also object to the navy’s use of manmade sonar, which is used to scan and investigate the ocean depths, claiming that it is harming dolphins and other marine mammals. They point to incidents such as the beaching of four different whale species off the coast of the Bahamas in March 2000, following navy sonar exercises in the area. Marine mammals strand themselves for a variety of reasons, but investigations confirmed that navy sonar caused the Bahamas stranding. Researchers are not exactly sure how manmade sonar affects marine mammals. Some believe the intense sounds may scare or disorient them and cause them to rapidly flee to the water’s surface, resulting in a sort of decompression sickness that damages sensory organs and causes internal bleeding.

If technological sonar can be implicated in the death of dolphins, it would be a tragic irony, considering that the sonar is based in part upon nature and dolphins’ superior echolocation capability. Efforts to replicate dolphin echolocation continue to fall short, as humans have yet to achieve the complexity and precision that 50 million years of evolution has bestowed upon dolphins. Perhaps if scientists could understand dolphin-speak they’d have more luck, but for now the true nature of dolphin communication remains mysterious.

About
Interview: Hardy Jones
Dolphin Captures: Past, Present, and Future
The Effects of PCBs
Additional Web and Print Resources