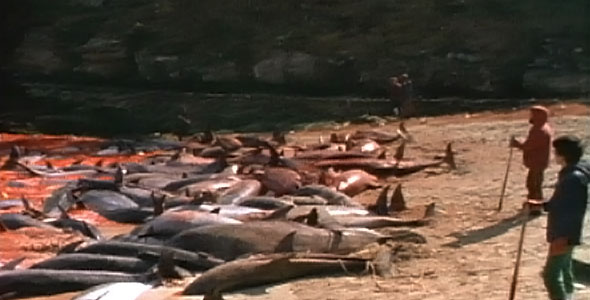 In the summer of 2003, word got out that fishermen in the Solomon Islands, a tropical chain of islands in the Pacific, had trapped some 200 bottlenose dolphins in a shallow inlet. After securing the animals’ captivity, they began selling them to the highest bidders.

Who were the buyers interested in such cruelly captured creatures? Marine parks that prize the intelligent animals for their ability to perform acrobatic tricks, and hotels and amusement centers that charge guests a hefty fee to “swim with the dolphins.” Like the dolphins captured in Bluefields, Nicaragua in NATURE’s The Dolphin Defender, these animals were destined for hotels. Although the Bluefields dolphins were eventually rescued and released, several dozen of the Solomon dolphins were not as lucky and were flown to tourist hotels in Mexico. The imports drew fierce protests from conservationists and condemnation from Mexican newspaper editors, who said the trade violated international conservation laws. Eventually, the government responded that it would more carefully scrutinize future dolphin imports.

Even today, despite government efforts, “the demand for live dolphins is just exploding,” says Hardy Jones, the filmmaker and dolphin advocate behind The Dolphin Defender. “The trade is being encouraged by people willing to pay $150 each to jump in the water and swim with a captive dolphin for an hour.” For decades, Jones has been working to expose and stop the trade in dolphins which he says contributes to the decline of some species. In Japan, for instance, where dolphin meat is considered a delicacy, the trade is helping bring back another troubling practice: the annual dolphin hunt, which Japanese fishermen largely abandoned in the 1970s after international protests.

Traditionally, the hunts took place in several seaside villages. Fishermen would corral the dolphins into nets or weirs, then kill and butcher them. The meat brings a good price on the Japanese market, and was at one time an important source of income for some families. (Jones says dolphin meat today is contaminated with mercury and other pollutants, and not very safe to eat.)

In 1980, Jones filmed one of the hunts and gave the bloody, dramatic footage to television networks. Many viewers were shocked, and the ensuing protests persuaded many fishermen to abandon the practice. One village eventually established a dolphin-watching industry to help replace lost income.

But Jones says the growing dolphin trade, which some analysts estimate involves up to 1,000 animals a year, is encouraging Japanese villagers to bring back the hunt. That’s because they now have two kinds of customers: those interested in buying the meat, and those willing to pay $20,000 or more for a single live dolphin.

“Japan is becoming a major source of dolphins along with China and some other nations,” Jones says. Demand is also coming from Asia, where an economic boom is promoting the growth of tourism. In the United States, dolphin captures are strictly regulated; there have been no legal captures since 1993. Some marine parks have learned to breed dolphins while others display injured animals that are being rehabilitated or import animals from European parks.

In the Solomon Islands, the controversy over the 2003 captures has died down. But some conservationists say an unstable political situation has allowed the trade to continue on a smaller scale.

The protests have had an impact elsewhere. Last year, a dolphin hunter obtained a permit from the government of the Caribbean islands of Antigua and Barbuda to capture a dozen dolphins. After the public found out about the permits, however, protesters convinced officials to change their minds.

About
Interview: Hardy Jones
Dolphins and Sounds
The Effects of PCBs
Additional Web and Print Resources

Running With The Herd: A NATURE Short Film
The Elephants of Africa
Voyage of the Lonely Turtle
Touching the Wild
Holy Cow
Sharkland