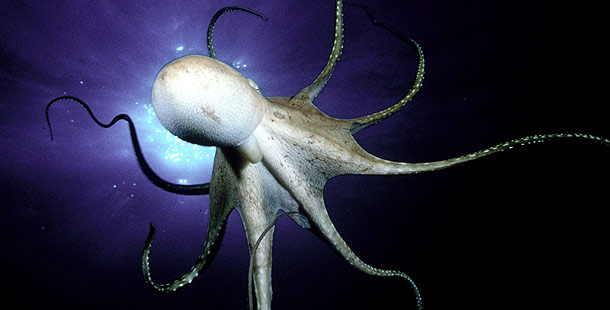 In Tahiti, it is called Rogo-tumu, a tentacled sea demon who drags unsuspecting seafarers to the ocean bottom. In the Bahamas, legends abound of the Lusca, a giant sea creature that can squeeze through the smallest cracks and change color in the blink of an eye. Along the ancient Mediterranean Sea, people spoke in reverent tones of Yamm, a sea god of many heads and legs who ruled over his watery realm.

Tall tales? Perhaps. But all are based on a remarkable real animal: the octopus. NATURE’s The Octopus Show helps viewers get their tentacles around this amazingly talented but little-understood creature. It follows the efforts of Mike DeGruy, a dedicated wildlife photographer, to capture these acrobatic but often shy animals on film, both in a laboratory-built “octopus gymnasium” and in the wild, deep sea. His quest pays off with riveting — and rare — footage of octopuses at work and at play.

It’s not surprising that octopuses have captivated both filmmakers and mythmakers alike. With their bulbous, floppy heads, big eyes, and long tentacles lined with suction cups, octopuses are attention-getting. But their looks aren’t the only thing that are striking. Octopuses also exhibit behaviors — from neon-bright flashing skin colors to breathtaking jet-propelled swims — that have made scientists sit up and take notice.

Only in recent years, however, have researchers begun to better understand these animals, which are members of an ancient group of animals called cephalopods. The other members of the group — squid, cuttlefish, and the chambered nautilus — typically have some kind of external or internal shell (in squids it’s a pencil-shaped internal structure called a pen). But the over 250 known species of octopuses appear to have completely lost their hard parts, evolving instead into a firm but flexible sack of tissues.

The flexibility pays off. As NATURE’s The Octopus Show illustrates, octopuses can squeeze into amazingly small spaces to hunt or avoid predators. Captive animals have been known to hide themselves in soft drink cans, aspirin bottles, and even under the plastic floors of aquaria. The ability to fit in a tight spot pays off when hunting, as octopuses can chase small crabs, shrimp, and fish into even tiny cracks, coaxing them out with their long tentacles.

Thanks to special cells in their skin, octopuses have the ability to change color, and even texture, on command. In the blink of an eye, they can fade into the sea floor, appearing to be just another bumpy rock. And when it comes time to mate, some octopuses advertise the fact with bright flashes of color sure to attract a partner. One Pacific Ocean octopus has even earned its name by being an especially good shape-shifter: the mimic octopus has been known to imitate everything from giant crabs and sea shells to fish and sea snakes.

This ability to adapt quickly to new situations has paid off in other ways too. Octopuses appear to inhabit virtually every kind of ocean environment, from shallow coastal waters to the deep sea. And they come in a dizzying array of shapes and sizes. Researchers believe the North Pacific octopus — known to science as Octopus dofleini — may grow to over 30 feet long and weigh 100 pounds. The smallest, on the other hand, is thought to be the Californian ocotopus (Octopus micropyrsus), which never gets more than an inch long.

Then there is the blue-ringed octopus of Australia and the South Pacific, which is noteworthy for another reason: its venom is deadly poison. A single bite from the golf-ball sized creature can paralyze breathing muscles, inducing death within minutes.

Many more kinds of amazing ocotopuses are still waiting to be discovered. Just recently, for instance, scientists accidentally discovered an octopus that has glow-in-the-dark tentacles. It will be years, however, before scientists understand why this and other octopuses do the amazing things they do.