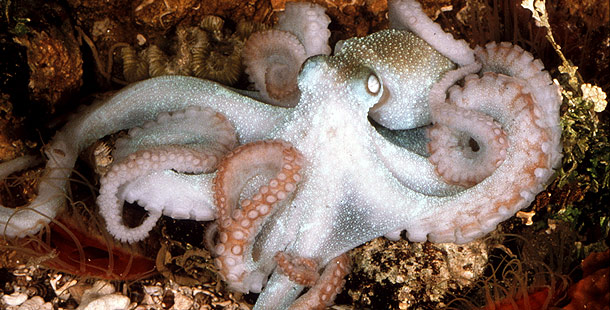 When it comes to changing color, octopuses are the ultimate chameleons. In the blink of an eye, they can blend into the background — or advertise their presence with bursts of bright color. Some even put on light shows with glow-in-the-dark tentacles!

The secret behind their color capability is special skin cells called chromatophores. Each chromatophore consists of three bags of pigment. By squeezing or expanding the bags, octopuses can change the color displayed by each cell, allowing millions of subtle combinations. And since each cell is controlled separately, they can create remarkably sharp displays. In addition, reflective coatings under the cells help enhance the effect.

Octopuses don’t use this ability just to camouflage themselves. They also use color to display their mood, researchers believe. In many species, for instance, white signals fear, red shows anger, while brown suggests relaxation.

But some octopuses produce even more colorful displays. In 1999, scientists announced that they had accidentally discovered an octopus that has glow-in-the-dark tentacles.

The capture of the bioluminescent octopus was a big surprise for Edie Widder and Sonke Johnsen of the Harbor Branch Oceanographic Institution in Florida. Although bioluminescence is common in squid and cuttlefish, it is extremely rare among octopuses. Indeed, it was previously known only from two species, where bioluminescence appears as a glowing ring around the mouths of breeding females — glow-in-the-dark lipstick, perhaps?

What made the light-producing abilities of the newly discovered octopus, Stauroteuthis syrtensis, particularly surprising was where the light came from: the suckers. The researcher’s first clue that there was something odd about the octopus came when they brought one into a shipboard laboratory during a research cruise in the Gulf of Maine. First, they noticed that its suckers weren’t very sucker-like: they didn’t stick to anything. Even more surprising, when they turned out the lights, they discovered bright blue light where the suckers should be. Later studies revealed that although the suckers still had sucker-like traits, many of the muscles had been replaced by light-producing cells.

Widder believes that the change from sucker to light organ may have occurred during colonization of the deep open ocean by an octopus that was originally a shallow-water bottom-dweller. Once the suckers were no longer useful for clinging to the bottom, their only remaining value may have been for communication or attracting prey. In this case, the researchers say, the prey is small crustaceans that may flock to the suckers “like moths to a flame.”

About
A Legend of the Deep
Additional Web and Print Resources