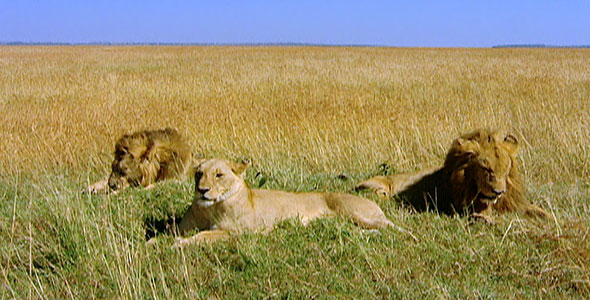 Can the King of Beasts be copied?That is the question some conservationists are pondering as lion populations dwindle worldwide. They say cloning — using advanced biological techniques to create genetic duplicates of existing lions — could become part of the effort to save the big cats. Other experts, however, are skeptical. Cloning lions would be difficult and expensive, they argue, adding that it won’t really solve the major problems facing the big cats, such as habitat loss. For the moment, they say, the money would be better spent on more traditional conservation efforts.

It’s a debate that couldn’t have even occurred a decade ago. Cloning a mammal was beyond the reach of science until 1996, when researchers managed to create a cloned sheep named Dolly. Since then, scientists have learned how to clone a host of other mammals, including mice, sheep, cows, dogs, and small cats. In 2002, scientists in Texas announced that they had cloned a domestic cat. They named the genetic replicate kitten “CC,” for “carbon copy.”

The breakthrough got some cat conservationists thinking. Cloning, they realized, could be a way to preserve the gene pool of dwindling cat populations, and perhaps create robust animals that could eventually be returned to the wild. In theory, genes could even be taken from the frozen tissues of dead animals, then reintroduced into populations through cloning. In essence, the dead could “walk again.”

In 2003, one conservation center began to follow through on these ideas. In New Orleans, the Audubon Center for Research of Endangered Species succeeded in cloning the first African wildcat, the bigger, wilder cousin of the common domestic cat. Eventually the team produced seven clones. Then, in 2005, the researchers went a step further. Two of the clones were allowed to mate, producing eight kittens. The births confirmed the idea that maybe, someday, cloned animals might be used to repopulate endangered species.

“We couldn’t be happier with these births,” Audubon researcher Betsy Dresser said at the time. “By improving the cloning process and then encouraging cloned animals to breed and make babies, we can revive the genes of individuals who might not be reproductively viable otherwise, and we can save genes from animals in the wild.”

Ultimately, she said, similar techniques might be used to reinvigorate populations of endangered small cats, such as Asia’s fishing cats and India’s rusty spotted cat, the world’s smallest feline. “The goal is to use whatever tools we can to help boost these populations,” explained Dresser. She cautioned, however, that while cloning could help conservation, “no single approach is going to solve the incredibly complex problem of disappearing wildlife.”

That complexity has helped spark controversy in India, where in 2004 scientists announced ambitious plans to clone the highly endangered Asian lion. Fewer than 300 are believed to exist, and the small group of Indian researchers said they wanted to spend $1 million to clone and restore the big cats.

The announcement drew criticism from conservation groups, who said the project raised false hopes. One problem, they noted, is that even if scientists succeeded in cloning the lions, their natural habitat is rapidly being lost to farms and development. “We spend millions of rupees trying to clone…lions, but where will we put them?” Belinda Wright of the Wildlife Protection Society of India asked reporters.

In addition, experts predict that cloning a lion won’t be easy. The vast majority of cloning experiments end in failure, they say, noting that it took more than 300 tries to create Dolly the sheep. Adding to the challenge is the fact that every mammal species has its own biological quirks when it comes to reproduction. Cloning a dog proved far more difficult than cloning a cat, for instance, because of some details of its reproductive biology.

In India, lion cloning advocates predict those technical problems will be overcome. So far, however, no scientist has succeeded in cloning one of the big cats. For the moment, weighing the potential risks and benefits of making copies of the King of Beasts remains a mostly hypothetical debate.

The Good, the Bad, and the Grizzly
Sharkland
Dolphins: Spy in the Pod | Part 2
Equus "Story of the Horse" | Episode 1: Origins
Voyage of the Lonely Turtle
The Last Orangutan Eden