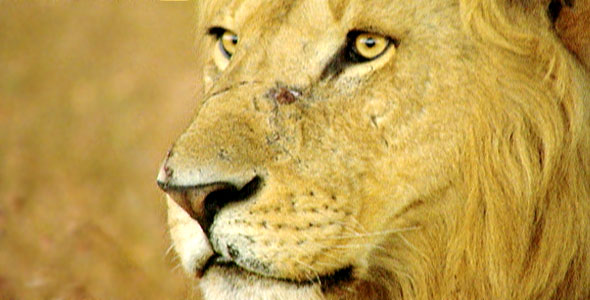 To reverse the trend, lion conservationists are enlisting every ally they can find. In early 2006, for instance, two groups — the World Conservation Union (IUCN) and the Wildlife Conservation Society — held a “lion summit” in Johannesburg, South Africa. They invited Africans from all walks of life to share their views on what it might take to keep lion numbers from dwindling.

Community leaders, for instance, discussed the threat that lions pose to Africa’s growing livestock operations. As cattle herds push into lion habitat, some of the cats have developed a taste for the easy-to-kill cows. Farmers desperate to protect their livelihoods often kill the predators. One key to protecting lions, summit delegates agreed, is to find ways to help farmers better protect their herds. Sometimes the solution is just a stronger fence.

Other delegates discussed the importance of protecting the lion’s natural habitat and sources of food, such as large herds of gazelle. “If there is nothing for them to eat, they turn to livestock and people too, occasionally,” IUCN cat specialist Kristin Nowell told reporters. One key will be making sure prey species have enough room to roam, perhaps by creating new protected areas or better protection in existing parks.

Innovative ways of conserving lions were also on the agenda. In some areas, for instance, tourists will pay big money to see the big cats. If that income can be funneled into local communities, it can create a strong financial incentive to protect the animals, the delegates agreed. Local people often know best “how to live together with lions; they have been doing so for a very long time,” said James Murombedzi, who directs the IUCN’s office in Zimbabwe.

Ironically, even lion hunting might help protect the species, some delegates noted. As NATURE’s The Vanishing Lions shows, trophy hunting for lions can be an important source of income for guides and local inns. The trick is to make sure that hunters don’t kill too many, researchers explained. If limits are set correctly, delegates said in a statement, “trophy hunting [is not] a threat but rather a way to help alleviate human-lion conflict and generate economic benefits for poor people to build their support for lion conservation.”

Overall, organizers are optimistic that the summit will set a new course for lion conservation in Africa. “It helped us to understand where other people are coming from — different backgrounds, different philosophies,” said Julius Kipng’etich, who directs Kenya’s Wildlife Service. “At the end of the day, we boiled it down to one main problem: unsustainable lion populations.”

Now the challenge will be finding the money and political support needed to translate plans into action. Conservationists recall that last century, African governments created parks and reserves in order to to protect lions threatened by overhunting. That success proved fleeting, however, as other problems, including human population growth, emerged. Addressing these problems will take far more sophisticated and cooperative solutions, cautions the IUCN’s Kristin Nowell. But she says the history of lion conservation has provided an important lesson: “We don’t want this century to be a repeat of the last.” This time, conservationists say, people will need to learn how to live with lions…or end up living without them.