When it comes to research on venom and converting it into useful drugs, studies involving exotic snakes or brightly colored frogs seem to attract the most attention. However, one of the most promising new venom-derived drugs actually comes from a very modest-looking sea snail. 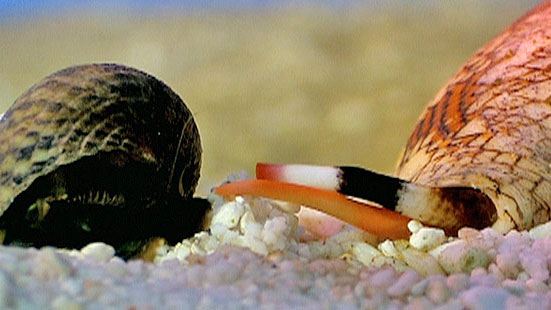 Worldwide, there are more than 600 kinds of cone shells found mostly in tropical waters around the Pacific. Collectors love them because their shells are decorated with an amazing array of intricate patterns.

Biologists, however, have long been fascinated by the behavior of these clever hunters. Some cone shells target other snails, while others like to feast on fish. To sense food, cone shells filter water through a tubelike organ called a siphon, awaiting a whiff of the telltale chemicals emitted by their prey.

Then, when its victim comes near, the cone shell extends a proboscis armed with a harpoonlike tip that injects venom filled with special chemicals called “conotoxins.” These toxins stop nerve cells from communicating with each other, causing paralysis within seconds and, eventually, death. Cone shells have even killed people who pick them up, unaware of the danger. Indeed, cone snail venom is so powerful and painless that victims can die unaware that they’ve even been bitten. 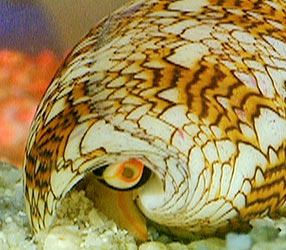 Conotoxins have long interested medical researchers because of their potential painkilling abilities. It turns out, however, that cone shell venom is very complex; each kind contains perhaps 50 or more different chemicals that target the brain and nervous system. Overall, researchers believe that more than 50,000 conotoxins may exist. That diversity has made it hard for them to isolate a specific chemical to work on.

But over the last few decades, conotoxins have begun to give up their secrets. Researchers have published more than 2,500 papers on the chemicals, and have described and identified more than 100 specific toxins which show promise for treating everything from arthritis to cancer. But the first new drug derived from a conotoxin, approved in 2004, targets chronic pain. Researchers estimate that the drug, based on the venom from the delicate gray and ivory magician cone shell, is a thousand times stronger than morphine, the most powerful traditional painkiller.

Even as cone shells show promise for medicine, however, their survival may be at stake. Collectors gather millions of the animals each year for the decorative shell trade. Demand from conotoxin researchers is growing too, since many shells may be needed to produce even small amounts of toxin. And coral reefs, which support more than half of all cone shell species, are under increasing threat from human activities.

To protect cone shells, biologists are asking nations in tropical zones to take new steps to monitor the shell trade and protect reefs. “To lose these species would be a self-destructive act of unparalleled folly,” researcher Eric Chivian of Harvard University in Cambridge, Massachusetts wrote in a 2003 paper published by the journal SCIENCE. “Tropical cone snails may contain the largest and most clinically important pharmacopoeia of any [group of animals] in nature.”