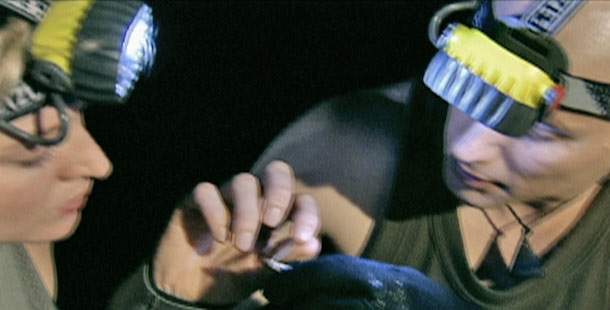 In the dead of night, a small boat slides across Australia’s Gulf of Carpentaria. On board are researchers Bryan Fry and his wife Alexia, both of whom stand ready, equipped with bright spotlights and large nets. They peer into the dark water. But it is not fish they are after — they are searching for sea snakes.

As NATURE’s The Venom Cure reveals, their goal is to collect, study, and catalog the chemical characteristics of venom from sea snakes. They have already identified a powerful anticoagulant that could one day be used to treat potentially fatal coronary conditions.

Eventually, on this night, the Frys catch a host of the sea reptiles. They carefully “milk” each of its deadly venom, then return the slithery creatures to their watery home.

Bryan Fry has milked thousands of snakes during his career, and has been bitten more than a dozen times. Luckily, he’s lived to tell about it, and all bites aside, he continues to study venom.

“There is something peculiarly fascinating in the use of a deadly toxin as a life-saving medicine,” says Fry, a Deputy Director of the Australian Venom Research Unit at the University of Melbourne. “The natural pharmacology that exists within animal venoms is a tremendous resource waiting to be tapped.”

Once back in the laboratory, Fry will carefully analyze the venom, which is essentially specialized toxic saliva that attacks a prey animal’s organs. Some snake venoms target the brain, shutting it down, while others destroy liver or blood cells.

How did snakes develop such specialized chemical weapons? Fry’s research offers some insights.

In a paper published in the March 2005 issue of the scientific journal GENOME RESEARCH, Fry and colleagues note that the active ingredient in snake venom is often an “evil twin” version of chemical proteins that the snake’s own organs need to function. Over the last 80 million years, snakes “learned” to adapt these proteins and convert them into toxins. So a protein that helps a snake’s liver function became a weapon able to destroy the liver of the snake’s prey.

Overall, Fry’s team found that some snake toxin types originated from proteins normally made by the snake’s brain, eye, lung, liver, or other organs. Gradually, the toxins were produced in tandem with saliva, to create their deadly bite.

“Snakes are incredibly inventive,” Fry says. “The wide-ranging origins of snake venom explains the amazing diversity of ways that snakes can kill their prey and why they have so much potential use in medical research.”

Eventually, Fry hopes that his work will help researchers identify chemicals that could be used to treat everything from liver disease to brain disorders.