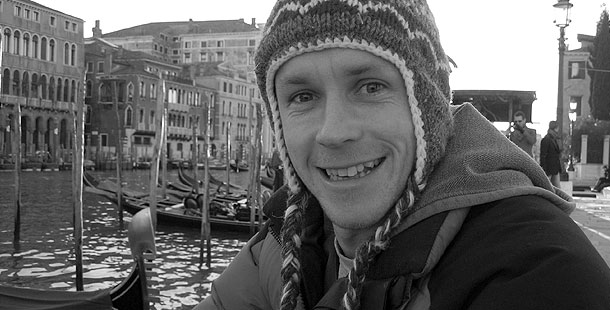 NATURE spoke with Victoria Falls producer and cameraman Jamie McPherson in April 2009. Here’s what he had to say about the making of the film.

Q: What inspired you to do a film on Victoria Falls and the Zambezi River?

A: Victoria Falls is such an iconic place. I had been there as a tourist, and knew it’d be an amazing place to do a film on wildlife – the falls and the Zambezi.

Can you tell us about research for the film, and how much time you spent on it?

We did our initial research by talking to people, and reading books. Once I made contact with a few people, through friends and through lodges, I headed out there for two weeks. I drove around and met as many people as I could and checked out as many locations as possible — to see what the wildlife was like out there. We needed to work things out ahead of time — looking in books for when the rainy season is, talking to local bird experts, etc. We timed everything out.

Books say there are lions and buffalo out there, but not whether it’s always possible to see them. It’s not a place many have filmed in before. We had to get a lot of permissions from different officials to film. We contacted the national parks authorities, tourism authorities and other conservation commissions in advance.

Altogether, Charlie (co-cameraman, Charlie Hamilton James) and I filmed for four months. We went back and forth. I went in March for a shoot at the end of the rainy season, then June; then Charlie went in July. I went back in September when the water level is lowest.

We rented a house in Livingstone, the closest big town. And we had a boat that we moored there.

How did you find Mr. White? Can you tell me more about him?

Initially, I met a few different fishermen out there, but the hardest thing to find is someone who is truly a knowledgeable fisherman. Mr. White was the only name that kept coming up. A Norwegian rafting guide told me, “You have to talk with him!” He thought Mr. White lived in a cave because most of the time he was by the falls and he often slept by the river.

Then I spoke to guys in the village who also recommended Mr. White. We wanted to do something different, and he was a perfect voice – a perfect story to tell, with wisdom and knowledge.

In an email you wrote a very moving account about Mr. White and the last days of your shoot. If you don’t mind, I’d like to include that here.

Everyone said I should go and see this old guy at rapid number nine. He was the oldest fisherman in the area and the most respected. And sure enough, when I went to rapid number nine, there he was. His English wasn’t great, but he was very excited about a film being made about his river and he was happy to be involved.

He was born in Zimbabwe in 1934. He is known as Mr. White, but White is his first name. His family name is Matukanyuni. (He showed me his ID card.) His mother was Zambian and his father Zimbabwean. His mother took him to Zambia when he was four years old. He lived in the village of Songwe, near Livingstone. He worked as a gardener for a local hotel when he was young, but had always been a fisherman. He described himself as a fisherman. He was very well respected in his village and around Livingstone. Most people in the area knew who he was. He taught the kids in the village how to fish and had fished the same rapids in the gorge since 1947.

We had planned to film two more sequences with him in the last week of our shoot, but days before he asked me if I could take him to the hospital because he wasn’t feeling well. He was diagnosed with cancer in the hospital in Livingstone.

The shots of him on the cliff above the gorge at the start and end of the film show the last time he saw the gorge. I was visiting him in the hospital in Livingstone and he said he wanted to get out of the hospital and see his river again as he was waiting for an appointment in Lusaka for further tests. He knew that we had wanted to film him looking down at the river and insisted we at least film that last shot. So with the nurse’s permission we went to the gorge for the last time.

I then sent him and his family to a specialist in Lusaka. The cancer was too far advanced for the treatment to work. He passed away in December 2008. He had three wives, eight daughters and seven sons.

He was a great man and I am very proud to have met him.

Victoria Falls is gorgeously filmed, just stunning. I know you filmed the falls and the Zambezi along with Charlie Hamilton James and Simon Werry. Can you tell us a bit more about how you got such dramatic visuals – your approach? Equipment?

We were trying to find new views of Victoria Falls and new ways of looking at it — from sunset to sunrise. We used local knowledge on the best places to film, and spent four months out there picking locations.

We used long lenses, high definition, and had a high-speed digital camera called a Photron, which films 5,000 frames a second. We used the Photron for the pied kingfisher and fish eagle footage. The camera is a lot of work; it’s not a camera you can pick up and run around with, it’s very complicated. We had to hook it up to a computer and a generator, and bring it by the river.

Simon Werry shot the aerials with a Cineflex. It’s great to see the falls from that perspective; it gives a sense of scale. A falls that is a mile wide is hard to comprehend but if you see it from the air, from above…

Can you tell us about filming the lunar rainbows?

Well, there are lunar rainbow tours, and the rainbows are visible to the naked eye, but with long exposure photography they really stand out. We used SLR still cameras to capture series of long exposure shots which are then stitched together to create the time-lapse shots.

How did you feel about safety?

We felt completely safe, the only thing was the hippos. The bull hippos are protecting their territory, and when the water drops they have to move. A local boat guy helped us negotiate around hippo bull territory. We just made sure to be careful.

In the film you show two different worlds – the one above the falls and the one below. Can you elaborate?

The world below is Mr. White’s world — very bleak, not many trees, but good fishing. And no hippos or crocodiles, so it’s safer. The world above is full of life because of the geography and shallows and sandy islands. They’re very different worlds, and in the film it’s more of Mr. White’s perspective. The Zambezi provides for him, even though it can be harsh.

There are so many lovely songs in the show. Can you tell us more about the music? Do the lyrics match picture in any way?

All our films have a musical style, something that suits the film. We avoided western songs, and chose music/musicians from Africa, like Rokia Traore. And we tried to avoid clichés.

I have to admit we didn’t choose music based on lyrics, but rather for the mood that the songs conveyed.

SHARE
Features
Visualizing the Scale of the Falls
Victoria Falls - Preview
Map of the Falls
Music from the Film
Photo Essay: Victoria’s Many Moods
More on Zimbabwe’s Politics
You May Also Like
The Private Life of Deer
Animal Homes: Cities
John Denver: Let This Be A Voice
Bears of the Last Frontier: City of Bears
KALAHARI – The Great Thirstland
The Loneliest Animals