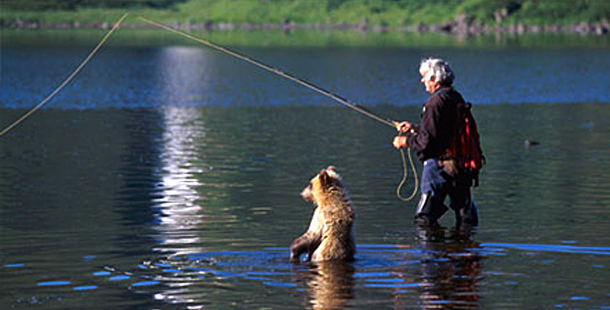 It may be the most unusual — and adventurous — adoption ever attempted. In the spring of 1997, naturalist Charlie Russell and artist Maureen Enns became the proud foster parents of three rambunctious daughters.

But these were no ordinary little girls: they were wild grizzly bear cubs whose mother had been killed by a hunter. And it was no ordinary adoption. Instead of trying to tame the youngsters, the new parents hoped to teach their sharp-clawed “kids” just enough to survive on their own in the rugged wilds of Russia’s Kamchatka Peninsula. The NATURE program Walking with Giants: The Grizzlies of Siberia tells the remarkable story of how this human couple went about raising a trio of bears in one of the world’s last great wildernesses. And it highlights how, through a combination of careful study and personal courage, Charlie and Maureen are forcing people to reconsider an age-old image of the grizzly bear as a ferocious man-eater who can’t live in harmony with people. They demonstrate that it is possible to learn to forge a respectful relationship with these seemingly fierce giants.

“We are carefully exploring the question of whether, by treating bears well and with respect, we can create a safe environment for both of us,” says Russell, a former Canadian rancher who has nurtured a lifelong fascination with the powerful predators. “If it is possible to truly understand and live with grizzlies, then it should be of great interest to people all over the world who are responsible for managing and preserving bears in the wild, particularly in areas close to human habitation.”

To many people, grizzlies are symbols of power and ferocity — creatures to be feared and, too often, killed. Indeed, they are awesome animals: capable of weighing 1,500 pounds, standing 10 feet tall, and running more than 30 miles an hour over rough terrain. But Russell, Enns, and others say the big brown bear, known to scientists as Ursus arctos, is too often misunderstood and maltreated. Russell, for one, believes that friction between bears and humans often stems from people’s unthinking treatment of the bears, from hunting and harassing them to feeding them from their cars and trash piles. “Most people fear bears because of a perpetual misunderstanding,” he says, “and bears fear people because of the mistreatment [they] receive due to this misunderstanding.”

Unfortunately, as human settlements have encroached on bear habitats around the world, it has become increasingly difficult to find bears that trust humans. In Europe and the United States, for example, people have all but exterminated bears from most areas: only about an estimated 1,000 bears survive in the lower 48 states, occupying less than one percent of their historic range. Biologists estimate another 40,000 or so grizzlies roam the forests of western Canada and Alaska, but these isolated populations too are beginning to feel human pressure.

But in eastern Asia, biologists believe more than 100,000 grizzlies still lope across the landscape. And some scientists say nowhere on Earth supports a denser and more isolated population of grizzlies than Russia’s rugged, volcano-studded Kamchatka Peninsula. Once, this 100,000-square-mile tongue of land astride the Pacific Ocean was considered a Siberian wasteland. The 19th-century Czars and later the Soviet dictators sent their most feared prisoners here to shiver in the freezing winters and struggle through the ferocious storms and insect hordes of summer.

But in this land of extremes, life also blossoms. Attracted by the millions of salmon that use the peninsula’s streams and lakes to spawn, grizzly bears gather by the hundreds and thousands each spring, summer, and fall to gorge themselves on fresh fish. Readying themselves for their winter sleep, they can eat nearly 100 pounds of food a day — not just fish, but a wide array of berries and other plants as well. Upon seeing this isolated bear kingdom for the first time in 1994, Russell and Enns realized they had found an ideal place to test some of their ideas about learning to coexist with wild bears. In 1996, with permission from Russian authorities, they built a small cabin on Kambalnoe Lake at the southern tip of the Peninsula. Using the cabin as a base camp, they have helped local conservationists monitor local grizzlies and protect them from poachers, traveling across the region by foot, boat, and using a small, home-built float plane piloted by Charlie. Braving the region’s world-famous bad weather, they spent long months observing dozens of nearby bears, learning how to live alongside them as just another inhabitant of the landscape.

As Walking with Giants shows, their careful observations helped the couple develop remarkably intimate relationships with the shy and sometimes playful bears. The two have learned how, when, and where they can approach the animals without alarming them. They have shown that the bears are not necessarily a threat, especially if treated with care. “We have seen some incredible things,” says Russell. Enns, however, stresses neither she nor her partner have thrown caution to the winds. “We don’t sit out there taking unnecessary risks,” she says. “We study the bears carefully and we carry pepper spray” to ward off attacks — though she is happy to report that they have never had to use it. Still, the risks are real. In 1996, for instance, prominent wildlife photographer Michio Hoshino, a veteran grizzly observer, was killed by a 7-year old Kamchatka bear that had become used to eating at a garbage dump and thus lacked the wild bear’s instinct to avoid people.

Russell and Enns hope that what they learn from walking with the giants of Kamchatka will help prevent such tragedies in the future. “We have been able to live beautifully with these animals, with no serious threat, because of what we’ve learned,” Russell says. “Hopefully, sharing what we learn will help people — and be a big help to the bear, too. It is a real problem for any species to be misunderstood.”