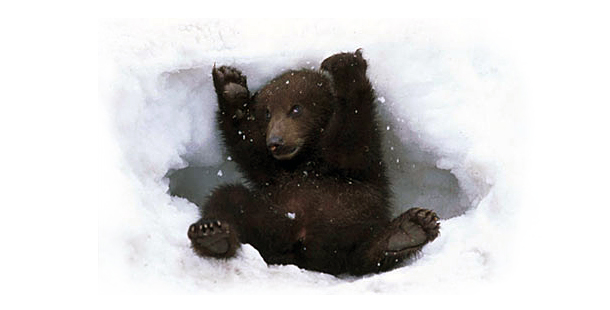 The moment Charlie Russell and Maureen Enns saw the three orphans in a Russian zoo, they knew what they had to do.

It was May, 1997, and the couple was visiting the animal park in Petropavlovsk, Kamchatka’s biggest city. There, in a cage, were three female grizzly cubs, recently orphaned when a hunter accidentally killed their mother. “The director of the zoo made it very clear to us that there was a death sentence on [the cubs’] heads,” the couple recall in a diary posted on their Web site. “The zoo had no money to feed them and visitors were throwing food in to them as they played behind the iron bars.”

In a moment, the cubs had “won their hearts,” the pair says. That night “we had a carrying box built for their transport” back to their wilderness cabin. Their plan: reintroduce the cubs into the wild, teaching them the basic skills they would need to survive. In this case, however, there was no manual for the new parents to follow on how to bring up the babies. They would literally be making it up as they went along. As Walking with Giants shows, however, the new family got along just fine. Russell and Enns were careful not to get the cubs, named Chico, Biscuit, and Rosie, too used to humans, instead teaching them to forage on their own and encouraging them to romp and swim independently. They did, however, keep them inside a fenced pen for some time, to protect them from adult bears who might kill the youngsters. By the fall of 1997, however, the bears had grown enough to be ready to spend the winter sleeping — and Charlie watched as they began to build a den. (Despite popular belief, bears do not actually hibernate, which involves a reduced body temperature and pulse rate; rather, they enter winter dormancy, a deep sleep from which they can be awakened, even moving to a new location if they are disturbed.)

The following spring, in 1998, “Charlie met the cubs not long after they came out of their den,” Enns recalls. And by that summer, “we were teaching our cubs to dive for dead fish. We start out in about four feet of water, see a fish on the bottom, and then chuck a rock into the pool and call the cubs over to look down in the water. One of the cubs got right in.”  The couple hopes to find their cubs safe and sound for many years to come. “We are proud of the fact that our cubs are still together,” Enns notes, especially since many experts doubted the pair could successfully reintroduce the animals into the wild. “Eventually,” she says, “we hope to see our cubs have cubs of their own,” which could happen when the bears are four or five years old.

What the future holds for the cubs and Kamchatka’s other grizzlies, however, is uncertain. The collapse of Russia’s economy has crippled many conservation and anti-poaching efforts, leaving the bears more exposed than ever to those who would kill the magnificent creatures for their skin, innards, or bones, body parts that many people believe hold magical or medicinal powers. Luckily, the economic woes have also hampered the poachers, who are having a harder time buying the fuel and equipment they need to invade the bear’s isolated wilderness territory.

The Good, the Bad, and the Grizzly
Hippos: Africa's River Giants
My Congo
The Beauty of Ugly
The Whale Detective
Dogs in the Land of Lions