BOB ABERNETHY: Easter on April 4th is for many Christians the most important celebration of the Christian year. Nevertheless, it’s also a time when what may be a surprising number of Christians ask: What really happened on the first Easter morning? Did Jesus, in fact, rise bodily from the dead? Two eminent Christian historians have been debating that and other issues of Jesus’ life in a new book and in joint appearances around the country. They are N. T. Wright, dean of Lichfield Cathedral in England, and Marcus Borg of Oregon State University. Chris Roberts reports on the resurrection debate.

CHRIS ROBERTS (Correspondent): On Easter morning, amid glorious anthems and hallelujahs, Christians will attend church and affirm that Jesus rose from the dead. Easter is the climax of the Christian year, and the resurrection is a central doctrine of the faith. But there are also questions. What’s at the core of Easter, and do the people in church really believe in the miracle? 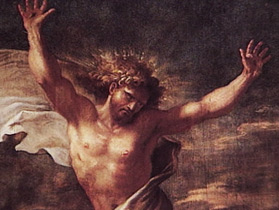 Dr. N. T. (TOM) WRIGHT (Lichfield Cathedral): Was Jesus bodily raised from the dead or not? And I say yes, and Marcus says no. Those are the big things.

ROBERTS: Englishman N. T. Wright and American Marcus Borg disagree about Jesus and the resurrection. They are historians — both Christians, both Oxford graduates — and friends for many years. Together they’ve written a new book, THE MEANING OF JESUS. Last month at Washington’s National Cathedral, they began a series of public debates about the very foundations of Christianity.

Professor MARCUS BORG (Oregon State University): I do believe in the resurrection of Jesus. I’m just skeptical that it involved anything happening to his corpse.

Dr. WRIGHT: When people believed in resurrection, they were talking about what we would call some kind of embodiment. A disembodied resurrection is a contradiction in terms.

ROBERTS: In the New Testament, in the first letter to Corinthians, the apostle Paul wrote that if the resurrection did not happen, then the whole Christian faith is in vain. Yet many churchgoers feel uneasy about what happened — or might not have happened — on the first Easter. One recent poll said that up to a third of Christians today do not believe Jesus PHYSICALLY rose from the dead.

Professor Borg is one of those Christians who believes that the meaning of Easter does not depend on physical events. 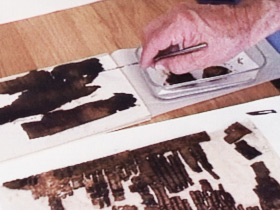 Prof. BORG: The truth of Easter really has nothing to do with whether the tomb was empty on a particular morning 2,000 years ago or whether anything happened to the corpse of Jesus. I see the truth of Easter as grounded in the Christian experience of Jesus as a living spiritual reality of the present.

ROBERTS: For the last two centuries, using ancient texts and archaeological clues, historians have studied the biblical era with a critical eye. Their goal: to uncover what’s called the “historical Jesus.” Professor Borg is a member of a controversial group of scholars, called the Jesus Seminar, who have joined — and publicized — this ongoing debate.

To make their conclusions clear, members of the Jesus Seminar have voted and color-coded the New Testament. Printing a passage in red means they believe it really happened. Grayey or purplish pink indicates varying degrees of ambiguity. But most of the text, including the resurrection stories, gets coded black — for fiction.

Prof. BORG: I wouldn’t see these stories as fictions in a modern sense of the word. I would see them as characteristic of the ancient mind, and of ancient storytelling techniques where you do use a story to express a truth of something that has happened. I think the Easter stories are true in the sense that the followers of Jesus really did have experiences of Jesus as a living reality after his death. I don’t think those stories are simply saying his memory lives on. I think they had visionary experiences. I think they had experiences of him as a presence within the life of the community. 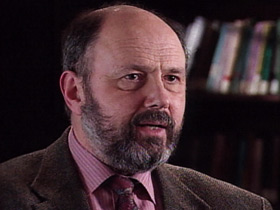 Dr. WRIGHT: Sometimes when I’m in debate with Marcus, with Professor Borg, what I find is that he then doesn’t like the idea of miracle, doesn’t like the idea of God intervening. So anything that looks that it’s as though it’s going down that line, he says: “Let’s not have that. It’s a symbol,” “It’s a metaphor,” “It’s got wonderful meaning,” “It’s true, but at another level.” And I want to say: “Yes, it is true — at all sorts of levels.” [But] it is those things because it did actually happen.

Dr. WRIGHT: We can be completely confident on Easter day that the things we’re saying in church are true. For the very good reason that, historically speaking, it’s actually impossible to explain the rise of early Christianity without it. The early Christians believed that Jesus was the Messiah — despite the fact that he’d been crucified. Whoever heard of a crucified messiah? There were several other would-be messiahs in the first century or within a century or so of Jesus. Once they had been killed, nobody three days or three years later said he was the Messiah. How do you explain how they came to that view?

ROBERTS: According to Dr. Wright, the first Christians believed God acts in the real world of flesh and blood, in real time. So that if a TV camera had been in the tomb, it would have recorded the transformation of Jesus’ body.

Dr. WRIGHT: It seems to me that if we don’t grasp it and say that’s what it is all about, we will downgrade it into being either a general sense of maybe there is hope somewhere or a vague feeling of maybe Jesus is alive, and I think we need to get away from that vagueness and actually focus on the sharp meaning that it had for them in the beginning. 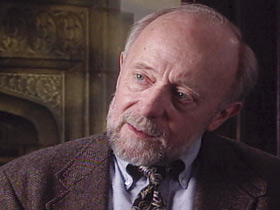 ROBERTS: Yet Professor Borg argues we may be making too much of what did or didn’t happen on Easter morning.

Prof. BORG: I think of the great Easter hymn, “Christ the Lord is Risen Today,” with all its soaring hallelujahs. And I see that hymn as profoundly true even though I don’t think its truth depends upon the tomb having been empty or something happening to the corpse of Jesus. Christ indeed has risen, but to confuse that with an event that you could have photographed, I think is to trivialize the story.

ROBERTS: Professor Borg and Dr. Wright have said they intend their debates to be models of constructive public disagreement. Fundamentally, they want to invite others to wrestle as they do with the mysteries at the heart of Christianity. This is Chris Roberts reporting.