MARY ALICE WILLIAMS: The tenacious durability of the world’s great religions is due in part to their ability to adapt to a changing world and still retain their core beliefs. Last week, we introduced you to an immigrant generation of Hindu Americans and their efforts to retain their faith here. Now we look at how their children are dealing with their Hindu heritage. Monika Samtani reports.

MONIKA SAMTANI: In India, Hindu wedding vows are about duty and family obligations, and the ceremonies last for days. But this is Fairfax, Virginia, and the ritual’s simplified to the most essential rites. The pledges to each other …

UNIDENTIFIED MAN: … to be my strength … 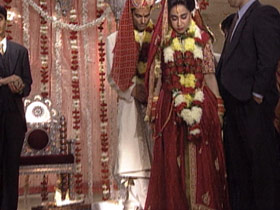 SAMTANI: … the walk around the sacred fire, are over in a few hours.

UNIDENTIFIED MAN: I will take care of your entire family (foreign language spoken).

Ms. ANJU BHUSHAN: I guess when I was younger, whenever I thought of weddings, I always thought of brides in white, a guy in a tuxedo, standing at an altar. There’s a reason for me to get married this way, and the reason is, of course, the religion.

SAMTANI: The bride and groom, Anju and Salil, were both born here, and they are part of the generation that is adapting Hinduism and incorporating elements of American culture into its practices. Hinduism is a faith that has evolved over thousands of years, beginning with the Vedas, four books of scriptures compiled by priestly sages. It is currently practiced by nearly 800 million people and is considered the world’s oldest and third-largest religion.

Hindus believe in one god who has many different forms. They also believe that one’s soul is reincarnated after death. In Hinduism, the consequences of everyday actions, or karma, may end the cycle of reincarnation and lead to becoming one with Brahman, the universal soul. 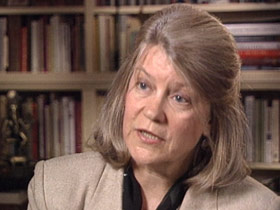 But the practice of Hinduism has evolved over time. Professor Diana Eck of Harvard University.

Professor DIANA ECK (Comparative Religions & Indian Studies): Hinduism is definitely a living tradition, but living also means changing; it means dynamic. So what we have in the U.S. is a new phase of the negotiation of what it means to be Hindu.

SAMTANI: Establishing rules for the practice of Hinduism in the U.S. is one change. Another is using English in addition to the ancient religious language of Sanskrit during ceremonies. Also, arranging to celebrate holidays on weekends as opposed to the days set by astrologers in India.

These changes will be important to young Hindus in particular as they adapt their inherited religion to the American culture.

Mr. ARUN RATH: The thing is there’s never really been, I guess, any kind of coherent sense of what Hinduism is supposed to be. 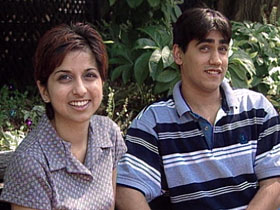 SAMTANI: Many second-generation Hindus here want clear directions on how to practice their faith, since in India, Hinduism is a part of daily life.

Ms. SHRUTI CHANDRA: We’re changing it to fit our American lifestyles. We have Sunday schools now because we don’t have our grandmothers and grandfathers teaching us, like, what Hinduism is about.

Prof. ECK: The Hindu tradition in the United States is not something that the next generation can pick up by osmosis. And to a great extent, I think one of the things that temple communities have done is to succeed in building temples, but to fail in providing real educational programs for the next generation.

SAMTANI: Some young Hindus are searching for understanding by organizing discussion groups, but most still feel the ancient traditions have little relevance to their American lives.

Mr. RATH: In my particular case, you know, we don’t do puja every day in my family. My father is not particularly religious in a ritualistic sort of way. 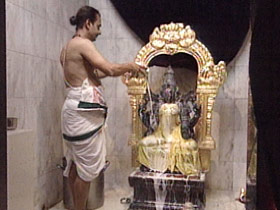 SAMTANI: They’re fascinated by the philosophy, but are abandoning the rituals, rituals like offerings of milk and nectar to deities to welcome them into the home or temple, or taking the time to say daily Sanskrit prayers. Many in the second generation rarely go to the temple or practice rituals, and often don’t understand them. There is a danger that the beliefs the rituals embody are at risk.

Prof. ECK: There is a lot to be lost if rituals simply become punctuation marks in life rather than expressions of the way a life might be lived.

SAMTANI: Hindu immigrants like the Bhushans realize that changes are inevitable, but are concerned that traditional practices could lose their meaning.

SAMTANI: But there have been tensions within families. 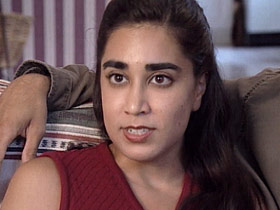 Mrs. CHAMPA BHUSHAN (Anju’s Mother): Now I just told Anju that, “I would prefer if you married a Hindu.” She always said that, “Mom, if I fall in love with somebody, I’m not going to see if it’s a Hindu or a Muslim or a Christian or whatever he is.”

Ms. BHUSHAN: I resented it and I was rebelling against it. But you know, I think that’s a teenage thing. And you know, when I got older, it became more about finding someone who was compatible, someone that I loved.

SAMTANI: If the Sanskrit language, the rituals, and the role of the many deities lose their significance with this second generation, what will be left? The future of the religion is in the hands of young couples like Anju and Salil.

Mr. SALIL PATEL: When we do have children, that’s going to be our opportunity to not only teach them, but learn ourselves. What will remain, I think, hopefully will be the essence of Hinduism, the concept of dharma and — of how to lead your life, combined with the western culture that we are brought up with, and that the marriage of those two cultures will hopefully live on in our children. And that will take a lot of effort, but that’s our way of keeping it alive.

SAMTANI: As this generation of Hindu Americans start their own families, they are adapting the practices of their faith. The question remains: To what extent can they retain their essential Hindu beliefs? In Fairfax County, Virginia, I’m Monika Samtani for RELIGION & ETHICS NEWSWEEKLY.