On February 27, Ireland’s venerable rock band U2, led by singer Bono (debt relief advocate, socially conscious musician, and “the most secular of saints” according to this week’s TIME magazine), won four Grammy Awards. Read an excerpt adapted from Bono’s introduction to the Psalms, published in 1999 by Grove Press:

At age 12, I was a fan of David. He felt familiar, like a pop star could feel familiar. The words of the psalms were as poetic as they were religious, and he was a star — a dramatic character, because before David could fulfil the prophecy and become the king of Israel, he had to take quite a beating. He was forced into exile and ended up in a cave in some no-name border town facing the collapse of his ego and abandonment by God. But this is where the soap opera got interesting. This is where David was said to have composed his first psalm — a blues. That’s what a lot of the psalms feel like to me — the blues. Man shouting at God — “My God, my God, why has thou forsaken me? Why art thou so far from helping me?” (Psalm 22). 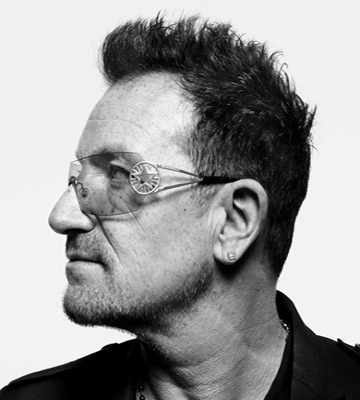 I hear echoes of this holy row when unholy blues man Robert Johnson howls, “There’s a hellhound on my trail,” or Van Morrison sings “sometimes I feel like a motherless child.” Texas Alexander mimics the psalms in “Justice Blues”: “I cried Lord my father, Lord thy kingdom come. Send me back my woman, then thy will be done.” Humorous, sometimes blasphemous, the blues was backsliding’ music; but by its very opposition, it flattered the subject of its perfect cousin, gospel.

Abandonment, displacement is the stuff of my favorite psalms. The Psalter may be a font of gospel music, but for me it’s in his despair that the psalmist really reveals the nature of his special relationship with God. Honesty, even to the point of anger: “How long, Lord? Wilt thou hide thyself forever?” (Psalm 89) or “Answer me when I call” (Psalm 5).

Psalms and hymns were my first taste of inspirational music. I liked the words but I wasn’t sure about the tunes — with the exception of Psalm 23, “The Lord is my Shepherd.” I remember them as droned and chanted rather than sung. Still, in an odd way, they prepared me for the honesty of John Lennon, the baroque language of Bob Dylan and Leonard Cohen, the open throat of Al Green and Stevie Wonder. When I hear these singers, I am reconnected to a part of me I have no explanation for…my “soul,” I guess.

Years ago, lost for words and forty minutes of recording time left before the end of our studio time, we were still looking for a song to close our third album, WAR. We wanted to put something explicitly spiritual on the record to balance the politics and the romance of it, like Bob Marley or Marvin Gaye would. We thought about the psalms — Psalm 40.

Psalm 40 suggests a time in which grace will replace karma, and replace the very strict laws of Moses (i.e. fulfill them). I love that thought. David, who committed some of the most selfish as well as selfless acts, was depending on it. That the scriptures are brim full of hustlers, murderers, cowards, adulterers and mercenaries used to shock me; now it is a source of great comfort.