BOB ABERNETHY: In a ruling with sweeping implications for the debate over abortion, the Food and Drug Administration this week approved the sale in the United States of RU-486, the early abortion pill. Religious supporters of legal abortion, among others, hailed the action, saying it would make abortions more accessible and more private. Opponents, led by the nation's Roman Catholic bishops, said the FDA action will, "further numb our conscience to the violence of abortion." The pill is expected to be available in about a month, but will be administered only by doctors in their offices. 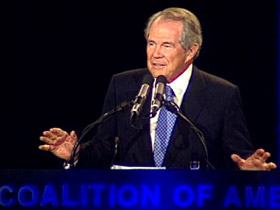 The FDA's decision was roundly criticized by those attending the Christian Coalition's annual meeting this weekend in Washington. The coalition has not been much in the spotlight so far this election season. But as Kim Lawton reports, coalition leaders promise their movement will be influential in November's election.

KIM LAWTON, correspondent: Christian Coalition founder and president Pat Robertson is rallying his troops for the election ahead.

Mr. ROBERTSON: We are geared for the biggest thrust in this election we've ever had in our history.

LAWTON: For the past two years, the coalition has been plagued by financial and organizational turmoil and by legal disputes over whether its voter guides are too partisan, and therefore, a violation of U.S. tax law. Still, the coalition plans to distribute 70 million new voter guides this fall. 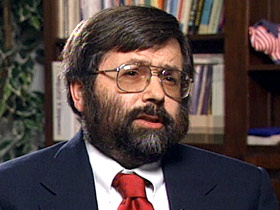 Professor JOHN C. GREEN (Ray C. Bliss Institute of Applied Politics): If present trends continue, their organization won't be very effective or viable in the future. On the other hand, if they turn things around during this election, they could be as effective as they were in the past.

LAWTON: Coalition opponents say the group still is a force to be reckoned with.

Reverend BARRY LYNN (Americans United for Separation of Church and State): There's no question that the Christian Coalition faces serious institutional malfunctions, but it's far too early to write the obituary for the coalition.

LAWTON: Polls show conservative Christians tend to vote overwhelmingly Republican. While the Bush campaign has been targeting moderate voters, experts say it can't afford to alienate the constituency of the Christian Coalition.

Prof. GREEN: While the Christian Coalition doesn't have the muscle that it's had in some past elections, it still has enough capacity to get a lot of voter guides distributed, and that means that there may be a lot of conservative Christians who show up to vote in November that otherwise might have stayed home. And in a close election in a state like Florida or a state like Ohio, that could make all the difference.

The Food and Drug Administration approved the sale in the United States of RU-486, the early abortion pill. The FDA’s decision was roundly criticized by those attending the Christian Coalition’s annual meeting this weekend in Washington. The coalition has not been much in the spotlight so far this election season. But as Kim Lawton reports, coalition leaders promise their movement will be influential in November’s election.