BOB ABERNETHY, host: In the mainstream Muslim community, there’s been a new focus on politics this election season. For the first time ever, American Muslims have launched a massive, national effort to register voters and organize political activity. In this installment of our special series on religion in the coming elections, Kim Lawton takes a look at the challenges facing American Muslims as they try to find a political voice.

KIM LAWTON: At mosques across the country this fall, there was an unexpected scene at Friday prayers … special displays urging Muslims to register and vote. 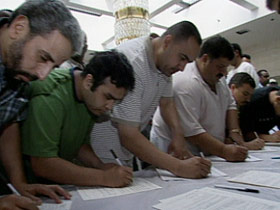 DR. AGHA SAEED (American Muslim Alliance): We must vote. Do you stand for Palestine? For Kashmir? For Chechnya? For Bosnia? Then you must vote. Every single Muslim must vote.

LAWTON: In an unusual show of unity, leaders of several Muslim organizations have banded together this year to promote the voter registration push within their communities.

SALAM AL-MARAYATI (Muslim Public Affairs Council): People are saying that “We’re gonna vote the bums out if we don’t get our voices heard in Washington.” And I think there you see the significant change in just the attitude of American Muslims in terms of how they feel they can make a difference in terms of U.S. policy.

LAWTON: Muslim leaders say the recent events in the Middle East have convinced many Muslims of the importance of having a voice to influence U.S. policy, which they perceive as being too pro-Israel.

NIHAD AWAD (Council on American-Islamic Relations): It pushes people to speak out more, especially to rectify policies that they feel have been unfair. 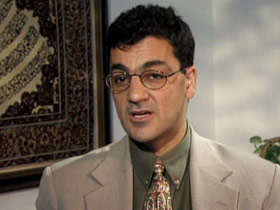 LAWTON: Experts say American Muslims are following the patterns of other immigrant groups. Initially, they focused inward, building their communities. But with the dramatic growth of the American Muslim community, many leaders are now urging their members to move outward and begin influencing the society around them.

AL-MARAYATI: American Muslim political activity is still in its nascent stage. There are only pockets of involvement and activity. More on an individual level. Definitely there is not an infrastructure or a hierarchy in the political framework for the Muslim community.

IBRAHIM HOOPER (Council on American-Islamic Relations): Muslims for many years have been a bit hesitant and some of it stems from a good portion of our community coming from parts of the world where voting hasn’t been a tradition or even allowed. So it is something that people have to learn when they come to this country.

LAWTON: Islamic leaders vow that thousands, perhaps millions, will be voting this year. Politicians are starting to take notice of this potential mine of untapped votes. 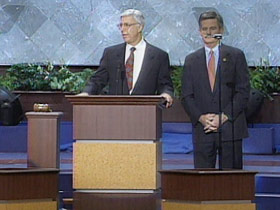 In July, Muslim leader Maher Hathout gave a benediction at the Republican National Convention, the first Muslim invited to do so by either party.

Buchanan: “You and I have many, I believe, shared values.”

But political analysts say the potential political impact of the Muslim’s community is unclear.

PROFESSOR JOHN GREEN (Ray C. Bliss Inst. Of Applied Politics): Some scholars think that there may be as few as 500,000 Muslims in the United States. I suspect that might be a low figure. Other people claim there are as many as six million. Maybe that is a high figure. So somewhere between half a million and six million voters. That’s a small group. But it is concentrated in certain cities, particularly cities like Detroit and Youngstown, Ohio. And in a very close election that group could make a difference. 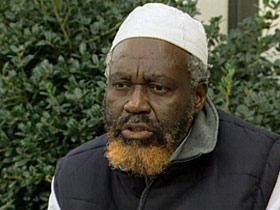 LAWTON: One of the biggest challenges may be convincing some members of the community that they should get involved. Some Muslims have religious objections to political involvement, arguing that the Koran forbids it.

MUSTAFA SAYID: They are not supposed to get involved in anything that has to do with the disbelievers. They have a duty to respect the Koran, obligation and duty to respect the teaching of Islam. And in Islam, you don’t support the enemies of Allah. That’s it.

Many other Muslims interpret the Koran as encouraging political activity.

AL-MARAYATI: You pay taxes. And the issue is, should we allow those tax dollars to be used for the purposes of justice, mercy, compassion, which are Islamic values, or should our absence then dictate how that money is going to be spent and be determined by others? To us, political activity is an Islamic responsibility.

LAWTON: The Council on American-Islamic Relations is one of several groups trying to develop Muslim political activity. The group opened a new office in Washington, D.C., to teach Islamic leaders how to make their voices heard.

AWAD: It’s no secret that the Muslim community has not been well represented in this country. And we felt with the growth of Muslims in numbers and interest, they are becoming more sophisticated. And to be effective, they have to be trained. It’s not only art, it is also science. 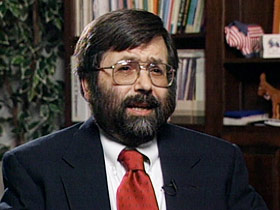 LAWTON: Many leaders have been urging Muslims to maximize their effectiveness by finding a unified voice. But given the diversity of the community, that’s been difficult.

JOHN GREEN: The Muslim community, just like the Catholic community or Protestant community, has many divisions. I think an additional problem with the Muslim community is that many of these groups are immigrant groups. They have just recently arrived in this country, they come from different political backgrounds, different ethnic origins and it sometimes makes it difficult for these groups to work together.

LAWTON: A significant part of the Muslim community is made up of African-Americans who tend to vote overwhelmingly Democratic. Polls commissioned by Islamic groups show that Muslims with an immigrant background are almost evenly divided between the Republican and Democratic parties. Many Muslims tend to be conservative on social issues such as abortion and gay rights, but more liberal on economic issues and civil rights.

HOOPER: The voting bloc for Muslims is still up in the air as far as liberal, conservative, Democratic, Republican. And I think this will develop over time, but what I think it shows is that Muslims are issue voters. They will see what the issues are, what the candidates believe and they will vote accordingly.

LAWTON: While their organizational efforts are still in the beginning stages, Islamic leaders say they expect the highest Muslim voter turnout ever next month. That could be crucial in key electoral states such as California, Michigan and Ohio. Many Muslims believe this election will set the stage for an even greater influence in the future.