BOB ABERNETHY: Today we have a special report on the Mormons, their beliefs, and their effort to enter America’s religious mainstream. Correspondent Lucky Severson reports from Salt Lake City.

LUCKY SEVERSON: A century and a half ago, Brigham Young led 600 Mormon settlers to this valley and predicted it would blossom as a rose. Today the Salt Lake valley is headquarters to what may be the fastest-growing church in the U.S., blossoming so fast it is continuously redefining itself. One of the church’s 12 apostles, Neil Maxwell. 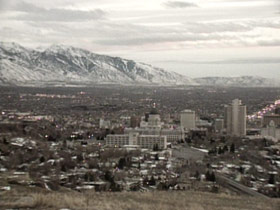 Mr. NEIL MAXWELL (Elder, LDS Church): Scriptures say the day would come when we’ll, as a church, come out of obscurity. I think that’s happening.

Professor BONNER RITCHIE (Brigham Young University): Now we’ve knocked the walls down and we’re going out, and I think we’re not so threatened in an ecumenical sense as we used to be.

SEVERSON: A church that was once an outcast is now held up as an example of all-American values: a church that cares for its own, with what may be the country’s largest private welfare system, not to mention its generous humanitarian aid worldwide; a finely tuned organization under the direction of church president, Gordon B. Hinckley.

Mr. GORDON B. HINCKLEY: No other church which has risen from the soil of America has grown so large or spread so widely. 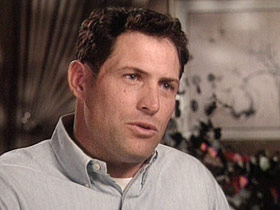 SEVERSON: There are nearly 11 million Mormons in 160 countries, five million in the U.S.

SEVERSON: Steve Young, the great-great-great grandson of Brigham Young — he’s a lawyer, a quarterback, and a poster boy for the 2002 Olympics, and he says as the church welcomes more people from the outside, it is changing on the inside.

Mr. YOUNG: That’s why I’m excited about the Olympics coming to Utah in 2002, for the chance for the world, for the people in Utah especially, to look over the mountains.

UNIDENTIFIED WOMAN #1: Get another big smile.

SEVERSON: Mormons have always been tight-knit and insular and mysterious to the world outside, ever since 14-year-old Joseph Smith said he had a revelation near Palmyra, New York in 1820. He said God appeared with Jesus and said that none of the churches at the time were true, and that he, God, was restoring the true gospel back on Earth. Smith said he was selected to become the first Latter-day prophet of what was to be called the Church of Jesus Christ of Latter-day Saints, later nicknamed the Mormons. The boy said he was given the authority to select his own 12 apostles. 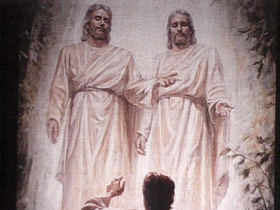 Mr. MAXWELL: The church, as it existed centuries ago, has been restored with apostles and prophets and with access to modern revelations. This is offensive to some people. They like to think of theology as being closed. God has spoken.

SEVERSON: Joseph Smith also said he had a visitation from an angel, who told him where to find some ancient gold tablets, and that he then translated them into what has become known as the Book of Mormon, named after one of the book’s prophets. The book, considered divine by Mormons, is a history of an ancient civilization that Christ is said to have visited on the American continent.

Because of their beliefs, church members were persecuted from the beginning, even after they moved to Illinois, where Smith was murdered. Brigham Young took over. Today the church is becoming far more mainstream. It helped when polygamy was abolished 100 years ago and when blacks were finally allowed to hold the priesthood in 1978. But Mormons have also become far more sophisticated in public relations. 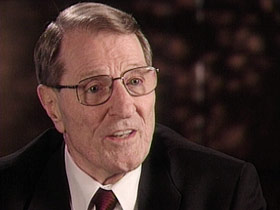 SEVERSON: Today they tend to downplay their distinctiveness and place more emphasis on their belief in Christ.

Mr. MAXWELL: I think it’s more Christ centered, and we are making extra efforts to define ourselves rather than sitting back passively and letting other people define us.

SEVERSON: Several Christian churches, Southern Baptist prominent among them, have long held that Mormons are not Christians, partly, they say, because Mormons believe that God and Jesus are two separate beings, each with human forms.

Mr. PHIL ROBERTS (Southern Baptist Convention): One cannot hold to Mormon doctrine that God was once a man, that Jesus Christ was procreated by heavenly parents, and that the gospel means you must participate in Mormon temple ceremonies to experience the fullness of salvation and be Christian.

UNIDENTIFIED MAN: Since the Book of Mormon is translated by the power of God … 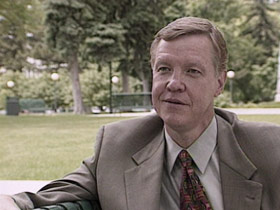 SEVERSON: It’s an argument lost on hundreds of thousands of new converts each year. There are 60,000 Mormon missionaries marching two by two around the world. Their most conversions by far are in Central and South America.

Prof. RITCHIE: And in a world that has perhaps high poverty or economic challenges of sorts or political challenges, this is a place to find refuge. A lot of people need answers. Sometimes they’re oversimplified, but still those answers are powerful.

SEVERSON: Mormon doctrine says there was, for all humans, a life before this one. The way we behave on Earth will determine our degree of glory in the afterlife. Those who are righteous enough may eventually become gods themselves.

Members who tithe and obey the word of wisdom, the church’s rigid health code, are eligible to enter the temple, which is essential to salvation. It’s in the temple that members can be married, not just for this life but for eternity. 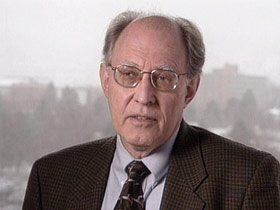 Prof. RITCHIE: My father and mother died in the last couple years and it — I kind of like the idea of being able to see them again and having a doctrine that makes that important.

UNIDENTIFIED WOMAN #2: … should be a land for the inheritance of my seed.

SEVERSON: We asked the church to find us an ideal Mormon family and they did, David and Jane Fjeldsted and their four children. The oldest son is away on a mission to Switzerland. His brothers Johan and Isaac and sister Loren also want to become missionaries. David is a financial planner. Jane is working on her doctorate in musical composition.

How many hours a week do you think you do church work?

Mr. DAVID FJELDSTED: Typically four to five. I mean, that includes our three-hour block on Sunday.

SEVERSON: The service lasts three hours and there are other meetings, extra duties, and volunteer work for those in need. Sunday service is presided over by lay pastors called bishops. All church positions, except for those at the very top, are part-time and nonsalaried.

Mrs. JANE FJELDSTED: David, why don’t you come up here and turn around? 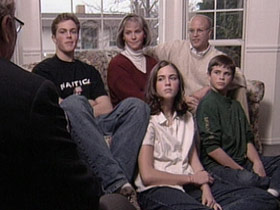 SEVERSON: Until her schedule got too demanding, Jane sang in the Mormon Tabernacle Choir.

Mrs. FJELDSTED: You ask if it’s a commitment and if it’s hard, and it’s just my life. And that’s the way it’s always been. There’s a hope and a peaceful feeling that comes by living the truth. And I can’t — I couldn’t live any other way.

JOHAN FJELDSTED: There’s a lot of bad stuff that goes on around school and, because of my faith, I don’t get involved in some of those bad things.

LOREN FJELDSTED: The gospel — when I have struggles and like in school, I can just talk to my heavenly Father. And he — I can tell him about anything and I’ll just get a really special feeling back. 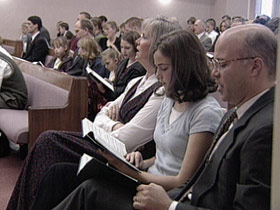 SEVERSON: Members in good standing must tithe 10 percent of their income every payday.

SEVERSON: And they will tell you one and all, poor, rich, and famous, that there are great blessings received from tithing.

Mr. YOUNG: Yeah, tithing’s funny. You know, to my teammates in professional football, they think that’s crazy. But when you think about — you know, when you read the Bible and that talks about faith, faith, faith, faith — faith is the first principle of the gospel — faith — and you think to yourself, “What better example of faith [than] to give what really matters to the world, money?”

SEVERSON: Tithing and investments make the Mormon Church the richest per capita in the country. Most of the money goes toward building new churches and temples. Church leaders won’t confirm or deny reports that the organization is worth about $30 billion. The credit for much of the church’s success and improved public image goes to church president, Gordon B. Hinckley, who is still charging ahead as he approaches his 90th birthday. 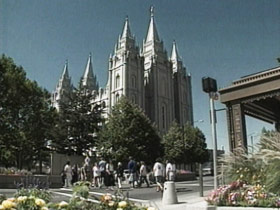 Mr. HINCKLEY: I’ve never smoked, I’ve never drunk, I’ve never done those things. The idea is — that I try to follow is to go to bed every night and be sure you get up in the morning.

SEVERSON: Among Mormons, like all presidents before him, Gordon B. Hinckley is viewed as a holy man who converses with God, a modern-day prophet.

Mr. MAXWELL: I’ve been close enough now to the situation for enough years to be able to be happy to give my validation that it really does occur.

SEVERSON: Let me ask you about Gordon B. Hinckley. How do you view him? Do you view him as a — as someone who speaks with God? 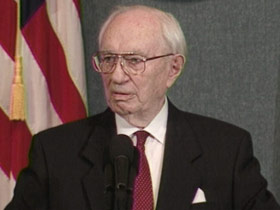 SEVERSON: No doubt about that, huh?

L. FJELDSTED: Uh-uh. I do believe it.

SEVERSON: The criticism you hear most frequently is that the church discourages its members from questioning their religion. And when they do, if they do it too loudly, they can get in trouble.

Scott Abbott is a good example. He was a professor at Brigham Young University who spoke out publicly and strongly in defense of another BYU professor who had criticized the church. He was not fired, but he says he was pressured out of BYU.

SEVERSON: On the other hand, there’s Professor Bonner Ritchie, a liberal Democrat, who has been critical of church positions over the nearly 30 years he’s been at BYU. 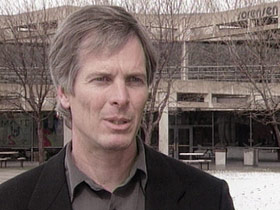 SEVERSON: But others did?

Prof. RITCHIE: Oh, a lot of people did, and I feel sad about that and I think sometimes it was an overreaction.

SEVERSON: Another issue that troubles some Mormons deeply is the way the church views and treats women. Mormon leaders were strongly opposed to the Equal Rights Amendment and, like a decreasing number of churches worldwide, only male Mormons can hold the priesthood. Critics say there is an attitude that trickles down to women at home and in the workplace.

Prof. RITCHIE: It is an issue. It is a serious issue. A lot of women that are in the workforce, some women are still told that they should be home raising children when they have exciting professional careers and they’re making wonderful contributions.

Mr. MAXWELL: I don’t see the restlessness that may be present in a few people. It’s there, but how they handle it becomes their challenge almost more than it is an institutional challenge, and they handle it differentially, the few. 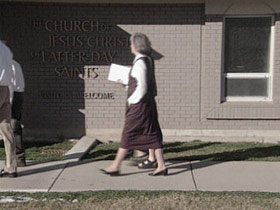 SEVERSON: Jane Fjeldsted says she is proof that women can pursue a career — working on her doctorate — and still be a good Mormon.

Mrs. FJELDSTED: We are partners.

Mrs. FJELDSTED: There’s an order and I defer to David on things that because he is the leader of our home.

Mr. FJELDSTED: We’re grateful for our children. We ask …

SEVERSON: It may not be for everyone, but for the Fjeldsted family, their religion is everything there is.

Mr. FJELDSTED: It provides the happiness that life is all about. You know, I don’t know what I’d do without the church. I think I’d be lost.

SEVERSON: This year, the church will build about 400 new churches and dedicate 36 new temples. Next year, there are plans to build even more. For RELIGION & ETHICS NEWSWEEKLY, this is Lucky Severson in Salt Lake City.