BOB ABERNETHY (anchor): Baptism is an important rite of initiation in the Christian tradition; however, the baptism ceremony varies depending upon the denomination. Catholics, Orthodox Christians, and many in the Protestant denominations baptize infants. Baptists, Anabaptists, and Pentecostal Churches baptize only adults or children old enough to profess their faith. The methods vary from sprinkling and pouring of water to full immersion. In our Belief & Practice segment, we feature the baptism of two-month old Stasha Galczynski at St. Mary’s Catholic Church and the baptism of 75-year old Natalie McCarthy at the Columbia Baptist Church. 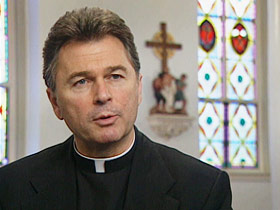 FATHER JOHN MYSLINSKI (St. Mary’s Church, Rockville, MD): So Jesus tells us in the Gospels very specifically, when he told his disciples, his apostles: “Go make disciples of all nations, and baptize them in the name of the father, the son, and of the Holy Spirit.”

It’s a call to conversion, it forgives sin, it forgives original sin. And I think that was emphasized for many centuries. Vatican II brought another aspect and reemphasized the whole journey with Jesus Christ, discipleship, new birth. And the water is a symbol of that.

In the early Church, of course, the sacrament was conferred on adults. They were the pagan religions and the Jewish faith. As the Church grew and there were Christian families and Christian families had children, they wanted to bring their children immediately into the church and so now predominantly we have baptisms that revolve around infants.

The Church traditionally has always believed that without baptism you can’t reach that fullness, that full relationship with God in the afterlife. And throughout the centuries, it has talked about limbo and places that these unborn souls would reside for eternity. And I think that has changed, we don’t talk about limbo as much as we used to. Baptism is the fullest way that we can expect to achieve salvation, it opens those doors of the sacred. 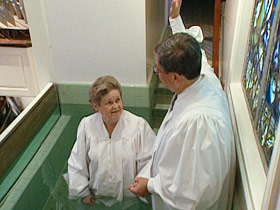 REVEREND RANDEL EVERETT (Columbia Baptist Church, Falls Church, VA): We think that when a person, herself becomes a follower of Christ then she identifies Christ with the baptism. Whether it’s a 75-year-old or a nine-year-old, it’s a picture of a beginning of a new walk with Christ.

It’s a bond between you and that person. You are participating in a life-changing experience. One of the reasons why we wouldn’t baptize infants [is that] we would be afraid that it would give them a false sense of security that there was no need for a personal decision later in life.

If they’ve been baptized by some mode other than immersion, we ask them to be baptized by immersion just because of the richness of the experience.

The very example of Jesus in the Jordan River — he was baptized by immersion and even the word “baptidzo” means “to dip” or “to immerse” — that’s why we have immersion. I know that sprinkling or other ways are significant, but we feel like you miss something if you’re not [baptized] as Romans, Chapter XI says: “We’re buried with Christ in baptism and we are raised to walk in newness of life.” It’s just a real important symbol to us.