BOB ABERNETHY, host: Salt Lake City, home of the Church of Jesus Christ of Latter-day Saints, is preparing to host the 2002 Winter Olympic Games. Although the church has agreed not to proselytize officially during the games, it has begun a campaign to educate visitors and the media about the Mormon faith. The LDS Church is one of the fastest-growing in the world, with more than 5 million Mormons in the U.S., 11 million worldwide. Our correspondent John Dancy takes a rarely permitted look at how the Church trains its missionaries — 85 percent men, 15 percent women — and what these young people face in the field. 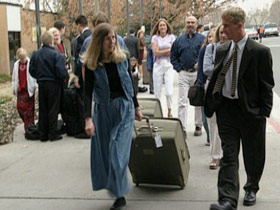 JOHN DANCY, correspondent: They show up in suits and ties and Sunday best. These 19- to 21-year-olds have been called to serve as missionaries for the Church of Jesus Christ of Latter-day Saints, the Mormons. Every Wednesday, about 500 new missionaries begin intensive instruction at the Missionary Training Center on the campus of Brigham Young University in Provo, Utah.

Yesterday, they were wearing jeans and t-shirts. Today, they are referred to as “elder” or “sister.” Immediately, they are thrown into an unfamiliar world.

UNIDENTIFIED MALE MISSIONARY #1: I have got this. (shows blue card)

OFF-SCREEN VOICE: That’s for your food.

New missionaries and families singing: “Onward, ever onward, as we glory in his name…”

DANCY: When they agree to serve a mission, they commit to go anywhere the Church needs them. Men serve two years, women 18 months. They pay their own way, or their family or congregation does. The Church now has missions in 120 nations and territories. 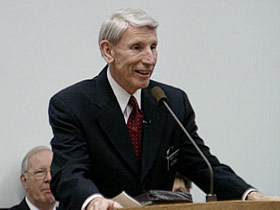 The missionaries will spend three to eight weeks here, depending on the language they study, learning how to be missionaries. Training goes on from dawn to late at night.

DAVID WIRTHLIN (President, Missionary Training Center): We have an advantage you haven’t had, because we know where your missionaries are every minute of the day.

DANCY: As the moment arrives to say goodbye to families, the enormity of this commitment hits them. It will be two years before they come home again. The regimentation begins immediately.

Elder EARL C. TINGEY (Executive Director, Missionary Department): We want them to leave home and go out and start this new venture, learning the language. It’s not easy to be eight weeks and learn a foreign language, and to learn new techniques of meeting people, learn how to take care of yourself, learn how to wash your own clothes. All of that is new to most of these young men and women. And by leaving their families and starting anew, to look forwards and not backwards. 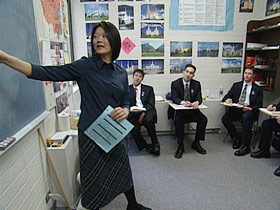 DANCY: The Missionary Training Center teaches 48 different languages, more if necessary. That is because the LDS Church believes every person should hear the Gospel in his or her own language. Teachers are usually returned missionaries. Often, in the early going the spirit is willing, but the tongue just won’t cooperate. But within a few weeks, missionaries have mastered basic conversation, enough to teach others about Mormon beliefs: that God appeared with Jesus to young Joseph Smith in a forest grove in upstate New York in 1820 and told him he was restoring the true church, originally organized by Jesus Christ. Mormons also believe Jesus appeared again after his resurrection, this time to an ancient civilization in the New World. The record of that event is contained in the Book of Mormon, which they believe is divinely inspired, like the Bible. Training is sophisticated. Computers help students master pronunciation. The young missionaries are taped as they practice presenting their message to native speakers. The early going is painfully difficult. 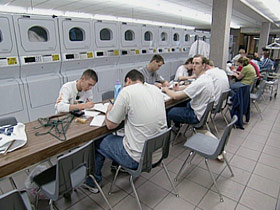 From now on, the missionaries get one personal day a week. Most use it to keep up the rigid personal appearance standards the Church demands. Laundry and letters go together. Missionaries are encouraged to write home once a week. Cheerful, faith-promoting letters are preferred. Phone calls are not allowed here. In fact, over the next two years missionaries will be allowed only one or two calls home a year. Often, tape cassettes are the only way to hear the sound of a girlfriend or boyfriend’s voice. In this ecclesiastical army, just as in the real one, mail becomes a lifeline to home. Serving a mission is voluntary, but the LDS culture exerts strong social pressure on young people to serve. About 40 percent of all young Mormon men agree to “put their shoulder to the wheel.”

Male missionaries singing: “We all have work. Let no one shirk. Put your shoulder to the wheel.”

DANCY: Last year, the Mormon Church had 60,000 missionaries in the field. How many is 60,000? Think of the BYU football stadium on a fall Saturday afternoon, and you get an idea. Now, imagine all those people knocking on doors, and you get a picture of the Mormon missionary effort. 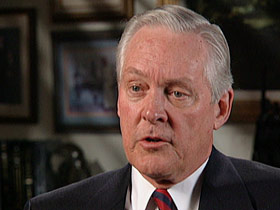 The kind of discipline and self-sacrifice involved in serving two years in a faraway place is so extraordinary it recently served as the subject of a small movie, God’s Army. The movie depicts one of the most controversial aspects of Mormonism: missionaries trying to convert members of other faiths. Church leaders are unapologetic.

Elder TINGEY: What we do is, we in effect say to that person, bring all the good, all the truth that you have, and let us see if we could add to it. And if we can, and if you are one who is attracted to truth, then we will teach you, we will help you.

DANCY: If Mormon missionaries are God’s army, then these are some of the veterans.

MICHAEL MCNIVEN (missionary, who served in Concepción, Chile): I felt like I went from the make believe world of a 19-year-old and got popped into reality. I felt like I was on the front lines on a war, and it was a war between good and evil and I felt I was right there, and I was a soldier. I mean, that sounds almost romantic, but to me it was reality. 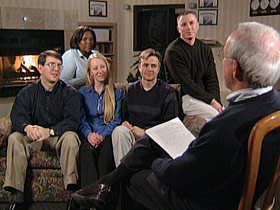 DANCY: All these returned missionaries admit now they entered the mission field with varying degrees of faith.

NKOYO IYAMA (missionary who served in Sacramento, California): I came into the mission with questions, and each objection from a knock at the door actually strengthened my faith.

NATE MATHIS (missionary who served in San Bernadino, California): I probably wasn’t as strong going into the mission. I definitely had a desire to serve and a desire to learn, but my conviction and my testimony was definitely strengthened while I was out there. 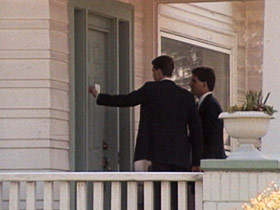 MR. MCNIVEN: You immediately want to write letters, you want to go find them, you want to revisit, and go back and say: “Hey, don’t you remember all those great experiences we had together?” and “How can I help?”

DANCY: Missionaries, whether they serve on Temple Square in Salt Lake City or in Outer Mongolia, must learn to deal with rejection. Most people they approach don’t accept their message.

HEIDI ANDERSON (missionary who served in Stockholm, Sweden): Every door that is slammed in your face, every person that is not interested — it’s almost a test of what you are saying. Do you really believe this message of Christ that God has a plan for you, and that there are prophets still on this earth today? And I think we have to confront those questions and answer them in our mind and in our heart every day.

MICHAEL SMART (missionary who served in Manchester, England): The hardest was when they had little kids. I would remember that I was a little kid when missionaries came to talk to my Mom and Dad, and I knew what I gained and continue to gain from my parents accepting that message and teaching it to me, and I just wished they would do the same. 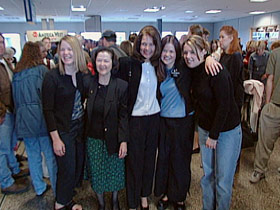 DANCY: Over the history of the LDS Church, more than 600,000 young men have served as missionaries. In a sense, it is a rite of passage.

Elder TINGEY: They go out as older boys and come back as young men with a great maturity, with purpose in life. And they go back to school, and they know what to do in most cases. That comes as a by-product. We don’t want them to go out with that in mind, but it happens in every case.

DANCY: Every Tuesday, a new group of missionaries leaves Salt Lake City — this one, for South America. For the next 18 months to two years, these young men and women will work 16 hours a day, six days a week. On average, each one will convert ten persons during that period. But with 60,000 missionaries in the field, that is enough to produce 300,000 new converts a year.

UNIDENTIFIED MALE MISSIONARY #2: It’s the best work on earth. What can I say? I’m excited.

DANCY: Through the efforts of missionaries, the Mormons expect to have 71 million members worldwide in 50 more years.