KIM LAWTON: They call it a museum of faith — a high-tech facility designed to tell the story of the Roman Catholic Church and of the man who led the Church into the new millennium. Organizers say that story has relevance for all people of faith. 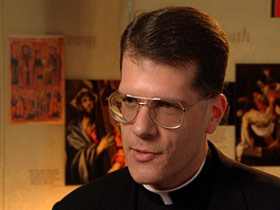 LAWTON: The Center was spearheaded by Cardinal Adam Maida of Detroit, who had urged the Pope to consider establishing a presidential library of sorts to preserve his legacy.

REVEREND BUGARIN: The more the Holy Father heard that idea, he said he didn’t like it. He said it was focused too much on the man and not enough on the mission. His whole mission, his whole pontificate actually is teaching, teaching the message of Christ. And so here, he did not want a monument that was just dedicated to himself, but rather an institution that really focused in on our teaching role within the Church.

LAWTON: So Cardinal Maida and his team designed a multi-faceted center that would focus on the themes of John Paul’s papacy. The Pope began forwarding ideas. 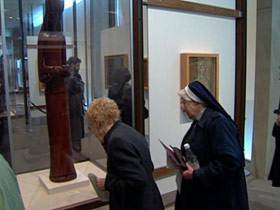 (to Reverend Bugarin): And so he was really involved in putting this together?

LAWTON: The Pope insisted the center combine theology with state-of-the-art technology. The interactive multimedia exhibit gallery does just that. With the help of a bar-coded swipe card, visitors can read the Scriptures and learn about Catholic history and teaching.

In another exhibit, visitors learn about stained-glass windows, and make their own digital window that is projected on a wall monitor.

The Center also has a scholarly arm, a think tank that will study issues of faith and culture. 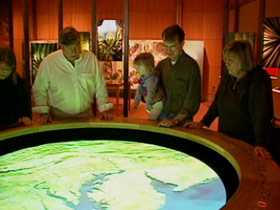 John Paul conceded that one small exhibit could be devoted to memorabilia from his life, including a pair of his skis.

All parts of the center bear the Pope’s mark. The hands of peace exhibit does so literally, with a bronze cast of John Paul’s hand.

REVEREND BUGARIN (to Lawton): This is actually the Holy Father’s hand print; in a very tangible way, we connect to people around the world that celebrate our faith.

LAWTON: The $65 million Center does have detractors, who wonder whether the money could have been put to better use. Center officials say it’s an investment in the future.

LAWTON: The Center hopes to have a visit from the Pope himself, perhaps later this year. I’m Kim Lawton in Washington.