BOB ABERNETHY, anchor: On this edition of Religion & Ethics NewsWeekly, we want to explore the religious questions raised by last Tuesday’s attacks. For instance, how could anyone think his religion permitted taking thousands of innocent lives? And what would be a just response?

First, a look at the extensive, often under-reported role of religion in America’s first reactions to the tragedy.

President Bush declared Friday a Day of Prayer and Remembrance. He attended a special service at Washington’s National Cathedral that was led by several national religious leaders, including the Reverend Billy Graham. That was one of thousands of services of prayer and other religious events all over the country.

Kim Lawton has our special report on religious responses to the attacks.

KIM LAWTON: For many religious believers, Tuesday’s tragedy evoked a sense of almost apocalyptic horror. As the hours unfolded, people of faith across the country reached out in whatever way they could. In New York, Washington, and Pennsylvania, many clergy rushed to the scenes of disaster, volunteering as chaplains and grief counselors.

Reverend Lloyd Prator, Rector at St. John’s in the Village Episcopal Church, offered his services in front of St. Vincent’s Hospital, where many of the World Trade Center victims were taken. He was on Seventh Avenue when he first saw the smoke. 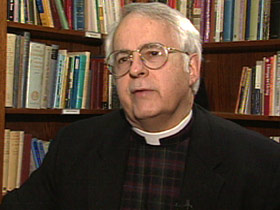 REV. LLOYD PRATOR (St. John’s in the Village Church): And I went from there downtown to the hospital and stood on the street for seven and a half or eight hours, working with patients as they came in, giving them blessings and in one or two cases, giving them Last Rites as they died. I went over to their gurneys and they were covered with bloody sheets, and I said the commendation: “Depart oh Christian soul from this world.”

LAWTON: Along with horror and devastation, Prator says he also saw God.

LAWTON: Religious groups also offered immediate practical assistance. Many opened their congregations as places of shelter. The Salvation Army and numerous other aid agencies set up stations in New York, Pennsylvania, and Washington, distributing emergency supplies to victims and refreshment to rescue workers.

For many Americans, the most compelling response was prayer. Just hours after the attacks, Roman Catholics in Washington spontaneously gathered at the National Shrine of the Immaculate Conception. Usually, only about 150 people come to the daily noon service. On Tuesday, more than 2,500 people were there, many students from nearby universities.

The Mass was celebrated by Cardinal Theodore McCarrick, the archbishop of Washington. He later learned that his nephew, a firefighter in New York, was missing. Six other cardinals and dozens of bishops from around the country were also at the service. They had been in Washington for a meeting. 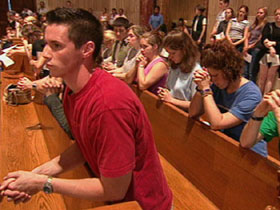 CARDINAL ROGER MAHONY (Archdiocese of Los Angeles): There’s silence in our hearts because there’s inexpressible grief and lack of information. And so the only thing that we do is stream naturally toward a church, a place of spiritual strength.

LAWTON: Churches, mosques, and synagogues across the country opened their facilities for prayer and meditation. People came through the days and into the nights, praying for the victims and for the nation. There were scores of prayer services, both small and large. Many Jewish congregations sponsored special memorial services.

RABBI JEFFREY WOHLBERG (Adas Israel Congregation): I think religion helps us to face that which we don’t understand, that which overwhelms us, that which makes life hard. It helps us to gain an anchor. It gives us a kind of rudder to direct us, often when life seems rudderless.

LAWTON: Alongside the prayers, there were angry calls for vengeance.

UNIDENTIFIED MAN: Whoever did this, you will pay dearly to America.

LAWTON: Such sentiments concern American Muslims, particularly. They fear being demonized by other Americans looking for scapegoats. On Wednesday, leaders of several national Muslim organizations held a joint news conference to categorically condemn the attacks. 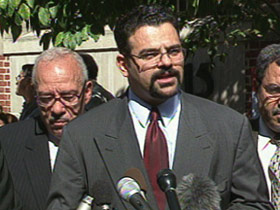 MR. KHALID TURAANI (American Muslims for Jerusalem): It is time for all Americans to come together, and those who are crazed, deranged, who would commit these acts, they commit these acts against all of us. And it is that time, particularly, that we need to stand together, not to allow those terrorists to divide us rather than unite us.

LAWTON: They also denied any connection between Islam and the violence.

MR. SALAM AL-MARAYATI (Muslim Public Affairs Council): This is a conflict involving terrorism. And terrorism has no place in any religion, be it Islam, Christianity, [or] Judaism. So we shouldn’t give any religious validity to this kind of maniacal behavior.

LAWTON: After the news conference, the Muslim leaders walked to a Red Cross Blood Bank to donate blood.

Since Tuesday, there have been reports of anti-Muslim harassment and vandalism, including an incident in Irving, Texas, where shots were fired into a mosque.

In a Virginia suburb of Washington, the Dar al-Hijrah mosque was among those receiving anonymous threats. Esam Omeish is vice-president of the mosque.

ESAM OMEISH (Dar al-Hijrah Mosque): We met actually urgently, immediately after the events, and one of the issues that we had to grapple with and make a decision about was, well, should we close the mosque or not? We were fearful of any backlash or rush to judgment that is accompanied by irresponsible acts. So we decided to suspend all activities, and we essentially said, “until further notice.” 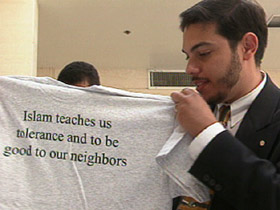 LAWTON: The mosque is passing out T-shirts reading, “Islam teaches us tolerance and to be good to our neighbor.”

In the Jewish community, many say the images of terror and violence against the innocent have given American Jews a new feeling of empathy with Israel. Sundown Monday marks the beginning of the Jewish high holy days, the most sacred time of the year for Jews.

Rabbi Jeffrey Wohlberg says the events of this week have changed the sermon he was planning.

RABBI WOHLBERG: It was going to be about one theme, Israel, and the American Jewish relationship to the state of Israel. Now it’s not about Israel, Israel is a secondary element, but it’s about justice and righteousness and right. It’s about community, it’s going to be about what we believe in, and hopefully, those values will sustain us in the coming year.

LAWTON: Some leaders are deeply concerned about the impact of the tragedy on relations between religious communities.

REV. JIM WALLIS (Call to Renewal): We must not allow this terror to drive us away from being the people God has called us to be.

LAWTON: Many are organizing interfaith worship services, such as this large gathering in Washington on Thursday. Leaders of eight religious traditions prayed together and pledged their solidarity to one another and the nation. Many are counseling their congregations not to let anger and vengeance take hold.

CARDINAL BERNARD LAW (Archdiocese of Boston): It’s very, very important that we ourselves not become tragically victimized by this in a way that would turn us into any kind of a vengeful mob.

CARDINAL WILLIAM KEELER (Archdiocese of Baltimore): If they live by the principles of their religious faiths, that will help to contribute toward peace and reconciliation today. That’s what we have to remind our own people and our neighbors.