BOB ABERNETHY: As of this weekend, 30,000 U.S. troops have been deployed to the Middle East and Central Asia, and among them are some of the country’s 2,800 military chaplains. How are they helping prepare U.S. forces for whatever lies ahead? In particular, how are they counseling American military personnel who are Muslim? Lucky Severson has our special report.

LUCKY SEVERSON: They don’t stand out in the faces of a military going to war, or on the bow of a battleship, but chaplains are always there — ministering to the spiritual needs of the military — have been since the Revolutionary War. Chaplains like Jay Magness. 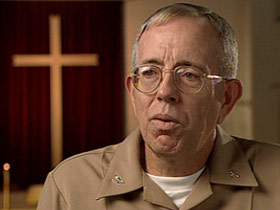 CHAPLAIN JAY MAGNESS (U.S. Navy): Our job as chaplain officers in the Department of the Navy is to help people find their moral equilibrium, which is their spiritual equilibrium.

SEVERSON: Chaplain Magness is in charge of all the chaplains in the Atlantic Fleet — the chaplains who sailed recently with the carrier Roosevelt battle group to support America’s military response. The chaplain was at the Pentagon September 11th, looking for survivors, until he realized there weren’t any more. Now he’s searching for answers. 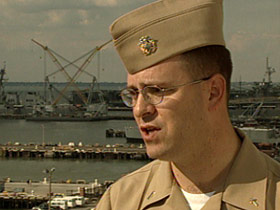 CHAPLAIN TIMOTHY GAULT (U.S. Navy, Destroyer Squadron, speaking to sailors): So how does it make you feel going into the coming deployment?

SEVERSON: Chaplain Timothy Gault ministers to a destroyer squadron that will be joining the Roosevelt battle group. He was a pastor for a nondenominational evangelical church in Florida until, he says, he was called by God to serve in the navy.

CHAPLAIN GAULT (counseling sailors): What does your mama think about this?

UNIDENTIFIED SAILOR: She’s sad that I’m leaving, but she’s happy that we’re actually taking part in something as courageous as what we’re doing right now.

SEVERSON: The chaplain has no qualms about his mission. He says he is guided by scriptures in the New Testament.

CHAPLAIN GAULT: Paul’s letter to the Romans, he writes and he says that the governing authorities are there because God has allowed them to have that authority and it is government responsibility to avenge wrath [sic] upon those who do evil.

SEVERSON: Inside the Pentagon, an image that might startle some who expect to find only things military. This is an Islamic Ju’mah prayer session for military and civilian employees, conducted by Army Captain Abdul-Rasheed Muhammad. He is the military’s first Muslim chaplain. Now there are 13. 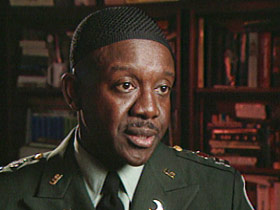 CAPTAIN ABDUL-RASHEED MUHAMMAD (Walter Reed Army Medical Center, speaking at the Ju’mah prayer service): We should ask ourselves, would our prophet kill innocent men, women, and children? Even if a Muslim becomes a terrorist, his answer would be “no” to this question.

PRESIDENT GEORGE W. BUSH (Address to Congress): I have a message for the military: be ready. The hour is coming when America will act and you will make us proud.

SEVERSON: When the president said this would be a different kind of war, it resonated through the military and among the 4,000-plus Muslims now serving — some of whom may have to wage war on Muslim soil.

CHAPLAIN MUHAMMAD: Probably it’s very similar to what sons and daughters and husbands and brothers experienced during the Civil War, where you had, literally, families fighting against each other. And I think anytime you have that happen, you will have a conflict of conscience.

SEVERSON: Of the Muslim sailors and airmen we spoke with, some, like Petty Officer Umar Salaam, sought counsel from their chaplains, but none say they have qualms about going to war against terrorists, even Muslim terrorists.

PETTY OFFICER UMAR SALAAM: Right, because in the Koran, we believe in justice, no matter if you are a Muslim, Christian, or Jewish, and I believe in the same thing. 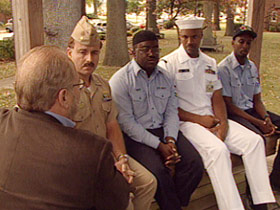 SEVERSON: This is Lieutenant Commander David Koch, a Muslim in the navy 14 years.

LT. COMMANDER DAVID KOCH (U. S. Navy): When you look at the acts that were committed — terrorist acts — and you have documented proof, there shouldn’t be any qualms about going after those who were responsible.

SEVERSON: In some ways, chaplains have never faced a challenge like the one they face now. This isn’t some far-off war. The stakes are higher. The questions are more complicated. Suddenly even those sailors, soldiers, and marines who’ve claimed no faith are searching. Everyone is.

SEVERSON: For Chaplain Magness, ministering to servicemen is a sacred mission. He remembers his painful search for answers in Vietnam.

CHAPLAIN MAGNESS: I’d realized that — people so often do in a war — warfare is man’s greatest inhumanity to man on some level. I could look down at my own hands and say I’m a participant in this. I’m not an innocent bystander. I came to the conclusion there’s only one thing that could hold my world together, in the midst of all the evil, all the inhumanity, and that was God. 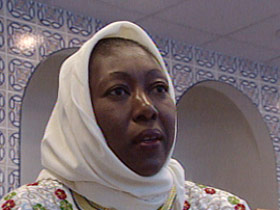 SEVERSON: When the chaplain heard reports of harassment of Muslim sailors, he immediately ordered that all chaplains in the fleet become involved at the slightest hint of harassment. And that must have been comforting for Lieutenant Sana Savage.

LT. SANA SAVAGE (Naval Leader Training Center): We are all Americans, you know. Americans in the military took an oath to serve and they will do the services that they need to do. We’re grieving just as everybody else.

SEVERSON: Lieutenant Savage is with the Naval Leader Training Unit. She is Muslim, and, she will tell you, she is an American.

LT. SAVAGE: I prayed about it. I joined the community in praying. I pray with my family. I pray every day for it. I pray for our leaders to guide them, give them wisdom so that we can do the right thing, and what’s right for the nation.

SEVERSON: It is difficult to imagine the heavy responsibility that weighs on the shoulders of the commander of a warship or a naval flotilla. 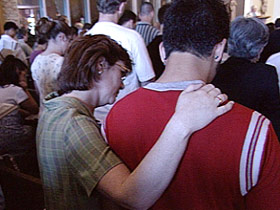 Chaplain MAGNESS: I had a senior commander, a general officer not too long ago, in the last couple of weeks, tell me he wouldn’t think about making a major decision that would affect lots of lives without first having a conference with his chaplain and praying with him.

SEVERSON: But the bottom line is always the young soldier, or sailor or marine or airman. And it is not just to help them make it through their mission or their enlistment, it’s so they will come home spiritually whole.

CHAPLAIN MAGNESS: We’ve got to have people who think, people who have spiritual centers and foundations, who conduct themselves rightly and do the right things, so that they don’t delve down into the evil they are trying to confront. There is a very thin line between the two.

SEVERSON: The questions and prayers may not be very different from those of all wars. But with this one, they’re searching even before the battle begins.

SEVERSON: For RELIGION & ETHICS NEWSWEEKLY, I’m Lucky Severson at the Norfolk Naval Base in Virginia.