FRED DE SAM LAZARO, correspondent: On weekends, Bogota’s streets take on a relaxed, almost festive air. You’d never know this country is still in a 50-year-old civil war. Peace talks in Cuba between the government and leftist FARC rebels have dragged on for two years. But here, Paula Gaviria says there’s quite a bit of indifference.

PAULA GAVIRIA (Colombia Victims’ Unit for Attention and Reparation): We lived our life feeling comfortable, in a way, with conflict. It was always there, so maybe we don’t know how it is to live without it. Only people who have suffered conflict, like victims, are the ones that really know that peace needs to be made.

DE SAM LAZARO: Gaviria heads a government agency set up to provide reparations to families or victims themselves of the long-running conflict. In all, that’s some seven million victims, fifteen percent of the population. There are more than 100 victims’ centers across Colombia. They are the first stop in a long journey that’s supposed to bring education and health benefits and housing, where possible a return of their original properties. It’s working in some regions, but it’s extremely complicated in others, Gaviria says.

GAVIRIA: We’re doing this in the middle of conflict, and we are hopeful that this will have a good end with the FARC in Havana. But there are regions like Buenaventura, where it’s not only conflict with the FARC, it's different conflicts that are there. There’s narcotics, there are guns going in and out. 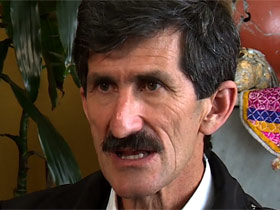 DE SAM LAZARO: Father Jesus Geraldo, cofounder 30 years ago of a rights group known here as Justice and Peace, agrees the conflict is far more complex than when it began at the height of the cold war as a government campaign against communist guerillas.

REV. JESUS GERALDO (Justice and Peace): The common perspective is that the only people responsible for the violence have been the guerrillas, without recognizing that the government and the paramilitaries have worked together and have been responsible for a great deal of violence and with economic interests in mind.

DE SAM LAZARO: He too cites the example of Buenaventura, on Columbia’s Pacific coast, long a transshipment point for narcotics. Soldiers patrol here ostensibly keeping FARC rebels out of the city. However, many residents say paramilitary groups—started by landowners also opposed to the FARC—and those in the narcotics trade who’ve run amok, fighting each other for territory, trying to evict people off valuable land, conscripting young men, or avenging perceived disloyalty.

GLORIA: A friend came to visit me on November 3, 2013. The paramilitaries came into the neighborhood, they took my friend outside and shot him in front of my children and my nieces and nephews.

DE SAM LAZARO: Ten years ago, they took her father away. The family never heard from him again, never reported it for fear of even worse consequences. Even today Gloria does not want her image or real name used. On average, about 12,000 people have been driven from their homes in each of the past several years here in Buenaventura. Dozens if not hundreds have disappeared or been murdered, some with particular brutality, their bodies dismembered and disposed of in clear sight, in a campaign intended to terrorize people. Things began to change in one small part of the neighborhood called La Playita. Some 4000 residents put up a gate and a sign and declared it a humanitarian space.

ORLANDO CASTILLO (Community Activist): We couldn't take it anymore, so we decided to do something about it. That’s when we decided to work with Justice and Peace.

DE SAM LAZARO: A nervous calm distinguishes the so-called humanitarian zone from other neighborhoods. So does the frequent visits by outsiders invited by Justice and Peace. 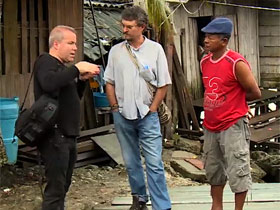 DE SAM LAZARO: The group documents human rights violations, bringing them to the attention of global human rights groups, courts here, and the Inter-American Court for Human Rights. And they face constant threats. Some have lost their lives. Under orders from the Inter-American Court, Colombia’s government provides security protection. But Father Geraldo says there are no guarantees.

REV. GERALDO: I travel in a government car, and I receive government protection. Last year that car was shot three times while it was parked in front of my house.

DE SAM LAZARO: Justice and Peace works primarily with indigenous and the Afro-Colombian community. Blacks account for a third of all displaced people, even though they comprise just ten percent of the population. In Buenaventura, a mostly Afro-Colombian city, residents say the terror has escalated in recent years. So has the value of waterfront land, where many live because of a recent free-trade agreement with neighboring countries.

MARIA MOSQUERA (Justice and Peace): When we first arrived, there was a lot of fear. No one left their house after 6:00 p.m.

DE SAM LAZARO: Justice and Peace’s Maria Mosquera and her brother, Edwin, moved into the community, part of the effort to have constant internationally connected vigilance and to hold security forces accountable for doing their job.

EDWIN MOSQUERA: They built a gate outside, and that was the symbol that said we don’t want paramilitaries in here anymore.

MARIA MOSQUERA: We asked for the police to be present at five strategic locations in the humanitarian space. The role of the police is to patrol just the perimeter of the area and to be alert for the paramilitaries.

CASTILLO: Since the 13th of April, when the humanitarian space was inaugurated, we have not had one single killing.

Gloria also lives in fear for her life. She doesn’t send her young children to school because it’s outside the safe zone, she says. Nor does she visit her husband, who lives and works two hours away. Reparations will take a while before they reach here.

Justice and Peace members must reconcile with the tiny gains—children being able to play outside, for instance. However, Father Geraldo says the Catholic Church, often passive to the group’s work in the past, has seen significant shifts since the advent of Pope Francis. The first Latin American pope has given such activism the thumbs up—a breath of renewal, he claims.

For Religion & Ethics NewsWeekly, this is Fred de Sam Lazaro in Buenaventura, Colombia.

Fifty years into a civil war among rebel forces, the government, drug traffickers, and paramilitary groups, the people of Colombia continue to look for a way to find peace in the midst of persistent conflict. In Buenaventura, members of a small neighborhood established a conflict-free humanitarian zone, in partnership with the human rights organization Justice and Peace. Father Jesus Geraldo cofounded Justice and Peace 30 years ago and believes support from the international community and the Catholic Church have been key to its successes in Colombia.