BOB ABERNETHY: As the U.S. builds coalitions and deploys troops in response to last month’s attacks, an old moral question has resurfaced. In order to fight a great evil, how much evil do you have to condone? For instance, in order to get the help of unsavory governments in the fight against terrorism, does the U.S. have to abandon its pressure on those same governments to recognize human rights? Nina Shea is an international lawyer and director of the Center for Religious Freedom at the human rights organization, Freedom House. Stephen Morrison is director of the Africa Program at the Center for Strategic and International Studies and John Wimberly is Senior Pastor at the Western Presbyterian Church in Washington, D.C. Welcome to all of you. Nina Shea, let’s begin with you. What are your greatest fears about the costs of fighting terrorism? 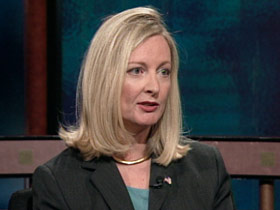 NINA SHEA (Director, Center for Religious Freedom at Freedom House): I am very concerned, Bob, about a policy trade-off. That we are in effect saying to our new allies, in this alliance against terrorism, that as long as you cooperate in not exporting terrorism, you can commit terrorism against your own populations inside your own borders. And this will be used as an opportunity to do political housecleaning, if you will.

ABERNETHY: But is there any question in your mind that the fight against terrorism is the first priority?

SHEA: No, it is a first priority and I think it is compatible with our human rights goals because in the end, these governments that are engaged in slavery, mass murder, and genocide against their own populations and, in fact, religious minorities in some of these cases, are ultimately no stable, reliable ally of the United States.

ABERNETHY: Dr. Morrison, I gather that you think engagement with some of these governments is not so bad?

DR. STEPHEN MORRISON (Director of the Africa Program at the Center for Strategic and International Studies): Well, I agree with Nina Shea that there is a serious human rights problem that we cannot ignore as we make these immediate, urgent measures to address the terrorist concerns. And, it’s a problem that cuts across a broad swath of states, the Uzbekistan, Tajikistan, Russia, Sudan, and we need a strategy. We need a medium-term strategy in which we bring our diplomacy forward, to apply new — both inducements and pressures upon these governments to address their internal human rights environments.

ABERNETHY: But do you fear the same thing that Nina fears, that an alliance with us will in effect give some of these governments the sense that they can go after their domestic political opposition in the name of fighting terrorism, just wipe out people?

MORRISON: There is certainly a risk these governments will take that cue and act on it. There is also a risk that in the midst of a war, of a very uncertain war, that the United States becomes distracted and doesn’t engage in the sort of sustained pressures that are needed.

ABERNETHY: John Wimberly, if it is a choice between fighting terrorism and protecting human rights — and probably not, but both have to be done — what guidance is there that religious traditions have for us? 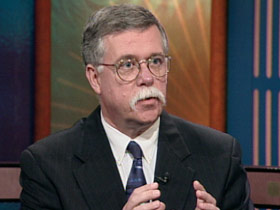 REV. DR. JOHN WIMBERLY, JR. (Sr. Pastor, Western Presbyterian Church): Well, the Christian community became involved in a controversy during World War II, with some people saying we shouldn’t be allying ourselves with the Soviet Union because communism is atheistic. Carl Bark, who is the founder of the modern evangelical movement, responded to that by saying, “We have a common enemy here. And even though we disagree with them on issues of faith, we have this common enemy and we have to focus on that.” I think we are in a very similar situation. The other thing that I think issues of faith bring to this, whether one is Christian or Jewish, Islamic, or any other religion, is that we should be looking for common ground with other people. And I am kind of excited about the coalition building that is taking place.

ABERNETHY: But you have no doubt in your mind that the fight against terrorism is the first priority right now, do you?

WIMBERLY: That is the common ground upon which we can engage in dialogue and conversation with some people. People, as we are sitting here today, are talking with each other around the world, in terms of diplomats, who have not been speaking to each other for a long, long time, if ever. And that’s progress.

ABERNETHY: What do all of you think the basic ethical principles are that should help us decide how far we go, whether there are any limits to what we will tolerate in the name of fighting terrorism?

SHEA: Well, I think this is an example of how we have gone overboard. Yes, I am for negotiation, dialogue, bargaining, but put human rights out on the table at least in this deal making. In the case of Sudan, we have the administration spiking human rights legislation, lifting sanctions, and suppressing a human rights report of the State Department, all for an exchange for a few tidbits of information. I don’t think that is right. 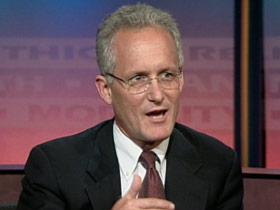 ABERNETHY: Steve Morrison, some say we are in a war against terrorism. Others see it more as a matter of a terrible, terrible crime for which the response should be criminal justice. Where do you come out on that and what difference does it make in this that we have been discussing? If it’s war, what are the implications of that for the trade-offs between the fight against terrorism and the preservation of human rights? Or if we call it something else, does that affect how far we can go and making deals?

MORRISON: We are threatened by a phenomenon that has been loosely described as Al Qaeda, which is a series of terrorist networks that operate in permissive environments. And our objective right now is to deny those networks, those environments, and crack those networks. Now, in the case of Sudan and some of the other places that have provided haven in the past to Osama bin Laden and to Al Qaeda, the question is, What is it internally within those states that motivates them to go down that road? If you don’t get to some of the root causes, you’re not going to have an enduring solution to this. So, criminal prosecution is one set of instruments that have to be brought into play. Very tough military action are another. And working the human rights, the humanitarian and democracy agendas in some of these key places that in the past were permissive environments has to be a priority as well.

ABERNETHY: John Wimberly, you’ve spoken of the possibility of good coming out of all this tragedy. As everybody’s grieving, mourning, that seems hard to believe. But what do you have in mind there?

WIMBERLY: Well, what I have in mind is a uniting around justice. I don’t think this is a war. I think it was a heinous crime committed against all humanity on September 11th. And justice is a common theme that runs through every religious tradition. And it is something around which everyone can unite. If it is a war, people begin to ask themselves, why are we participating in this war if I am a Ghanaian, or if I’m Chinese or something. But if it is a crime that is committed against all of humanity, I think that’s something we can unite against. It’s a good that can come out of this. Obviously, what happened was an awful thing. God wept as that happened. God had nothing to do with that. But there is a good that can flow out of it.

ABERNETHY: We are going to leave it there. Many thanks to each of you. To Nina Shea of Freedom House, to Stephen Morrison of the Center for Strategic and International Studies, and to John Wimberly of the Western Presbyterian Church in Washington.