BOB ABERNETHY: On our calendar this week, the 8-day Jewish festival of Hanukkah, beginning Sunday night. It is a holiday of freedom, recalling the successful Jewish revolt, around 165 B.C., against the Syrians, who had conquered and occupied Jerusalem. The revolt was led by a Jewish family called the Maccabees. Hanukkah is celebrated with a 9-candle menorah -- one to light the eight others, which stand for the Hanukkah miracle, when one cruse, or pitcher, of oil burned for 8 days. We heard the story at the home of Rabbi Bentzion Geisinsky, in Potomac, Maryland.

Rabbi BENTZION GEISINSKY: We accept this to be the first battle of freedom of religion. 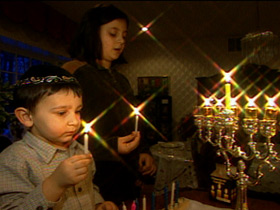 Where there were a very few who went up against a great majority. And that essentially is the story of the Macabees.

And they conquered Jerusalem and were able to retake the temple.

When they came into the temple, they found that it had been vandalized and violated.

And they made a decision that they would not light the menorah with defiled oil.

They found one cruze, which was enough to last one day, and that had been untampered with. And the amazing miracle was that this little bit of oil, instead of just burning an hour or two, burned for the entire night, and this happened for eight consecutive nights.

As a result, we celebrate this amazing miracle, the miracle of purity, of sanctity, and of boldness, and true more than anything else, of spirit.

In the blessing that we make over the menorah, we specifically state that this is about a celebration that happened back then, in these days.

No matter what happens in your life, and even if everything seems to crash around you, there's still a candle that continues to burn. And that is the menorah -- that is the story of the menorah. So essentially, we publicize it because it is the spirit of people and it is a miracle of God over man.

Hanukkah is a holiday of freedom, recalling the successful Jewish revolt against the Syrians who had conquered and occupied Jerusalem. We heard the story at the home of Rabbi Bentzion Geisinsky, in Potomac, Maryland.