BOB ABERNETHY: On our calendar this week, new year’s for the Chinese, Vietnamese, and Tibetans. It’s the Year of the Horse, which is known for natural disasters. Asian fortunetellers advise caution.

For Tibetan Buddhists, the new year is celebrated with dancing, and we sat in as members of the Drepung Loseling Monastery in Washington, D.C. performed. Our guide was Geshe Lobsang Tenzin, who spoke of the power of negative and positive energy, and about the legends associated with snow lions and [the] Black Hat Masters. 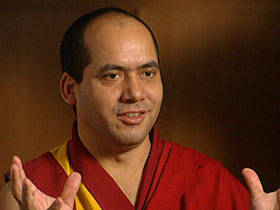 Legend has it that there was a tremendous revolution that destroyed the dharma, the spiritual practices in Tibet. The dance was performed to overcome the intense negativity.

The dancers have in their left hand a skullcap, and in their right hand, they hold a dagger. [The] skullcap representing the blissful state of mind. The dagger symbolizes the wisdom that cuts through the ignorance of the negativities.

Most of the Asian cultures, certainly India, China, Tibet … the division between the culture as a pure culture and religion really is not there. The culture incorporates the spiritual practices and elements.

[The] snow lion is very symbolic in the sense that, if you see the Tibetan flag, there are two snow lions holding a wish-fulfilling jewel in the middle.

For Tibetans, [the] snow lion represents the quality of fearlessness that is needed to uphold the positive qualities in our daily life.

Part of the reason we do this performance is to show that, through the positive state of mind, collectively, in the community, we can bring positive change not only to human beings, but to everyone sharing the environment.