BOB ABERNETHY, anchor: Now, the messages and fallout from the Enron bankruptcy. The United States has become a nation of shareholders. Directly or indirectly, through pension funds, 84 million Americans own corporate stock. This week, as congressional committees in Washington investigated the Enron scandal, many of the rest of us must have wondered whether what happened at Enron could happen elsewhere.

A conversation now on Enron ethics. Reverend Jim Wallis is the editor-in-chief of SOJOURNERS magazine in Washington. In New York, Larry Zicklin is a former managing partner at the brokerage firm of Neuberger Berman, and a professor of business ethics at New York University. In California, Kirk Hanson is executive director of the Markkula Center for Applied Ethics at Santa Clara University and was formerly a professor at the Graduate School of Business at Stanford.

Welcome to you all.

I want to begin with what appears to have happened at Enron. Larry Zicklin in New York, what were the ethical problems there? 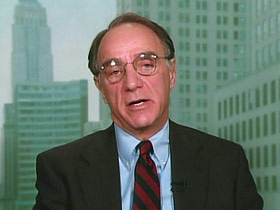 ABERNETHY: Kirk Hanson in California, what were the ethical problems as you saw them?

Professor KIRK HANSON (Markkula Center for Applied Ethics): I see this as a case of the ethics of new economy companies. This is an issue where in the new economy we have released many of the regulatory constraints, we’ve permitted a lot of experimentation. And unfortunately, in the process of doing that, executives have taken advantage of some of their newfound freedom. And I think the untruthfulness and stretching the bounds of acceptable behavior has resulted.

ABERNETHY: So, lying, conflict of interest. Jim Wallis, what did you see?

Reverend JIM WALLIS (SOJOURNERS magazine): Well, I think there are religious issues here, not just ethical ones. Being very straight, the Bible — biblical ethics — condemns in the strongest terms the behavior of Enron executives: greed, selfishness, corruption, cheating, and the harshest kind of treatment of employees. This is directly contrary to Jewish/Christian faith.

ABERNETHY: I am interested in what you all think about the culture there, because the kind of climate in which people work is really essential. Kirk, what did you hear from your students about that?

Prof. HANSON: Well, I have had students who have come from Enron and have returned to it, some of them not to last very long there, by choice. I think culture is critically important, the ethical environment in which one operates, and unfortunately, Enron appears to have been a problematic ethical culture, which didn’t encourage the kind of honesty, responsibility-taking, which is central to any ethical organization.

ABERNETHY: And the real issue, I think for us and for so many people, is the extent to which what happened at Enron came out of a culture that is common in many businesses. Larry Zicklin, is this a national problem?

Prof. ZICKLIN: I think it is a national problem. I think Enron may be the most egregious case. But when you look at this management, who for the last few years were taking great responsibility for what was happening at the company, the great success they enjoyed — being on the cover of every magazine, in the newspapers, being interviewed on television — suddenly now appearing before Congress and saying, “We didn’t know, we didn’t see, we weren’t part of it, we didn’t understand.” I mean, that’s a lack of responsibility. That is total irresponsibility. 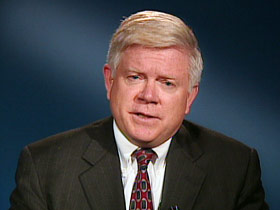 Prof. HANSON: Bob, I see this problem as one of the responsibilities of very top management. Unfortunately, this top management sought to take all the risks that we take within a capitalist system, but without any of the penalties when they failed. Employees suffered the downside of this: they lost their money, whereas senior executives left with much of their fortunes intact.

Rev. WALLIS: Treasury Secretary O’Neil said on a Sunday morning show that this is an example of a capitalist system where good decisions result in success and bad ones, failure. Well, that’s not what happened here. What we have is a situation now where the people at the top of the economy have made good decisions or bad ones and they get rich either way, and those at the bottom — ordinary people, employees and stockholders — good decisions or bad ones, and they suffer. That’s a systemic problem. This is an extreme case, but we have some more basic cultural and systemic issues here.

ABERNETHY: So what do we do? If the problems at Enron in Houston are problems for many businesses all over the country, how do we change that? Larry Zicklin?

Prof. HANSON: I hope Larry is right. I guess I don’t see that this will necessarily be THE seminal event. I think the whole history of the study of business ethics, the promotion of business ethics, is that it is reinforced by a succession of events like Enron. I was hired at the Stanford Business School in 1978, in the wake of the bribery scandals, the Lockheed scandal. That was the one that established and got this rolling, within at least secular universities in the United States.

ABERNETHY: So if there are predecessors here, okay, yes, but then how do we take this, or how does society take this and turn it into something that really is meaningful change? 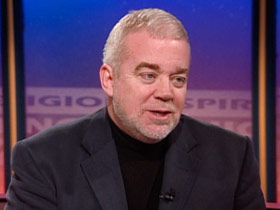 Rev. WALLIS: By saying that this is not just a business scandal or even a political one, but it is a cultural issue here. I hope it is a seminal event. My question is: Where do Enron executives go to church? And are they hearing on Sunday mornings or Saturdays in their houses of worship, are they hearing preaching and teaching that talk about moral issues of economy? When this moves from a Sunday morning issue to a Monday morning question and back and forth, that’s when it becomes, I think, a serious conversation.

Rev. WALLIS: And winning by any means necessary.

Prof. ZICKLIN: I was just going to say, and this applies to a broader range of people than any other event we have had in our history. This is the management, this is the board, this is the audit committee, this is the accountants, this is the employees, this might also involve politics. This is an extraordinary event.

ABERNETHY: And do you think [it will] really cause serious change in the culture? That’s a big assignment.

Prof. HANSON: Well, I think Larry’s point, talking about the audit firms already beginning to separate their consulting activities, I think boards of directors here in Silicon Valley — so many questions about what are the responsibilities of boards being asked just in the last few days — I think there are elements that change is coming.

Rev. WALLIS: All those involved want to limit the damage. I want to extend the conversation.

ABERNETHY: Jim, that’s the last word. Jim Wallis in Washington, Larry Zicklin in New York, Kirk Hanson in California — many thanks to each of you.