BOB ABERNETHY: India, which is mostly Hindu, and Pakistan, which is mostly Muslim, are once again on the brink of war over the disputed region of Kashmir. And both nations have nuclear weapons. Hindu-Muslim tensions extend beyond Kashmir. Within India, where Hindus make up 80 percent of the population and Muslims make up 14 percent, violent outbreaks that began in February may already have taken thousands of lives. Fred de Sam Lazaro reports.

FRED DE SAM LAZARO: Gujarat is the birthplace of Mahatma Gandhi. At the center from where he led India’s independence movement in the early 20th century, school children sing about non violence and peace. Gujarat has been anything but peaceful in recent weeks. Last February, a train was set ablaze by a group of Muslims in the village of Godhra. Stories vary on what provoked the incident but in the end, 58 Hindus, most of them women and children, were burned alive. The train was carrying Hindu activists returning from the site of a long-simmering dispute over ground claimed as sacred both by Hindus and Muslims.

The train attack sparked some of the worst religious violence seen in India since it was partitioned in 1947 by the departing British. An estimated half million people died. Muslims moving to the newly created Pakistan, Hindus going the other way to a newly independent, officially secular India. Many Muslims remained in India. They form a 12 percent minority. Today in Ahmedabad, the Gujarat state capital, more than 110,000 of the city’s Muslim minority have fled into makeshift refugee camps. They tell stories of rape, murder, and torched homes. 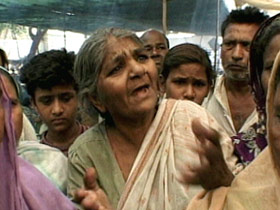 DE SAM LAZARO: A few miles away, a Hindu family mourns the loss of their son and brother, killed by a Muslim gang. He was a youth activist for the world Hindu council, a Hindu nationalist group. He was a martyr for the country–the cause, they say–and that cause will continue.

What sparked the violence is 800 miles away in Ayodhya. For Hindu nationalists this 16th-century mosque symbolized Muslim domination of their land. India is the birthplace of Hinduism, approximately 2,500 years ago. Islam first came to south Asia around the 12th century, and much of the region came under the rule of the Muslim Mogul empire at about the time this mosque was built. Hindu nationalists insist the Moguls destroyed a Hindu temple to build the mosque and that the site was the birthplace of the Hindu deity Ram. In 1992, a Hindu crowd tore down the mosque. Hundreds died in violence that followed across the subcontinent. 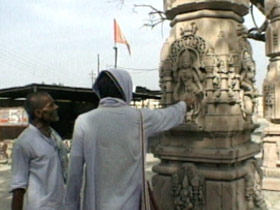 The BJP — or India People’s Party — allied with nationalist Hindu groups, rode the issue to electoral success. It campaigned to build a new Ram temple. In 1999, the BJP came to power with coalition partners who forced moderation. The government now says the courts should decide the matter.

As India’s Supreme Court grapples with the issue, Hindu forces have been active, building the temple, they say, just waiting to erect it. Not far from the disputed site, hundreds of pillars and columns have already been carved. Visitors come to admire the stone work, and they chip in a few rupees for the temple project.

Today, the dozens of their number who perished in the Gohdra train incident have been called martyrs. Their deaths have sparked retribution against Muslims on a scale Police Commissioner P.C. Pande says he’s never witnessed.

P.C. PANDE (Police Commissioner): We’ve dealt with several such situations — it’s not the first time. But you don’t expect people to come out in the hundreds of thousands. 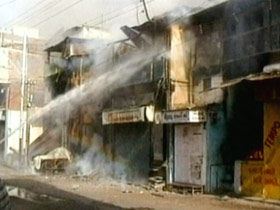 DE SAM LAZARO: By the time Army troops arrived, almost every Muslim-owned business in Gujarat was destroyed. The official death toll had exceeded 800 people, most of them Muslims. The toll is likely in the thousands. Many victims, like the relatives of 14 year-old Naved, have never been found.

NAVED (through translator): My mother, my father, brother, sister, plus an aunty and her family. We all lived together. On February 28, our house was burned. My hands and legs were burned. I ran to my employer who took me to the hospital.

DE SAM LAZARO: An uncle who lives in south India has offered to take him in, Naved says, when it is safe. It will be a while.

Still there are almost daily clashes. During our recent three day stay, more than a dozen deaths were reporteds. The failure to contain the violence indicates the complicity of the Gujarat government–a legislature in which the BJP has a majority. 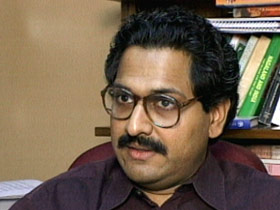 SIDDHARTH VARADARAJAN (Editor, THE TIMES OF INDIA): The killings that followed the train massacre were not spontaneous, they were not the result of mass anger on the part of Hindus, but it was an orchestrated, organized, calculated pogrom which took place because the ruling party, the BJP has state power in Gujarat and was able to use the power to essentially give a free hand to its party activists to indulge in this kind of criminal behavior.

DE SAM LAZARO: He’s also critical of national BJP leaders. He says they’ve tended to focus on the train incident instead of condemning all violence.

Mr. VARADARAJAN: I think a statesmanlike attitude would have been to condemn both, to recognize both are acts of terrorism, both have to be condemned. To say that one incident justifies the other in any way reveals a complete moral and philosophical bankruptcy.

DE SAM LAZARO: For their part, officials with the ruling BJP insist the Gujarat government did its best to bring the early carnage under control. Mukhtar Naqvi, the BJP’s national secretary, a Muslim himself, blames opposition parties for inciting the ongoing tension, for courting the Muslim vote. 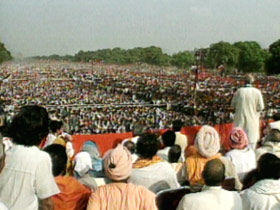 MUKHTAR NAQVI (National Secretary, BJP): They think if the minorities feel insecure then they can exploit them easily. They don’t want normalcy. They’re not interested in peace in Gujarat.

DE SAM LAZARO: What no one questions, is that the BJP, particularly in Gujarat, is closely allied with nationalist Hindu organizations. 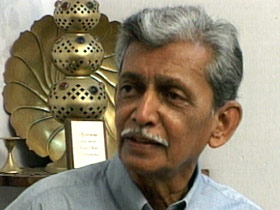 DE SAM LAZARO: Muslims and Hindus come from the same culture. But, like those who wanted Pakistan, he charges, many Indian Muslims today consider themselves Muslims first, not Indians. Many Indian Muslims say the words of an unrepresentative few are being used to tarnish an entire community.

ABID SHAMSI (Retired English Professor): The voice of sanity is not heard. There is such a large scale and widespread rule of fanaticism where you can’t go and talk reason.

DE SAM LAZARO: He notes that aside from a few movie stars and industrialists, India’s Muslims are poorer and less literate than most Indians. And far from being fanatics, he says, many Muslims rejected Muslim Pakistan and chose to live in a secular, democratic India. But Gujarat, some fear, is just the kind of environment that breeds religious extremism over time. 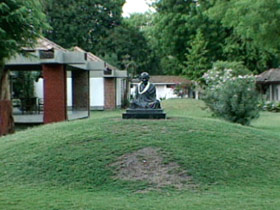 SYED SHAHABUDDIN (Publisher, Muslim India): We cannot control the motivation of individuals. An adolescent who has lost his entire family, who has seen his mother and sisters raped, and who has seen his fathers and brothers butchered. If he becomes a terrorist, what shall you tell him? What can you tell him? Yes, I go on telling them, “Please have fortitude, have faith in Allah.” And I teach them. And I try to keep them from the path of violence.

DE SAM LAZARO: Months into the religious tensions, however, the forces of moderation have yet to rise.

(to Professor Shamsi): There was one person we spoke to yesterday who said it will just take time and fatigue to bring peace to Gujarat.

Prof. SHAMSI: Yes, absolutely. And this time, it is going to be a long time.

DE SAM LAZARO: Many Indians take heart from the fact that the religious violence hasn’t spread beyond Gujarat–that the BJP in fact lost an election in Delhi soon after the Gujarat riots. But others fear the birth place of Gandhi may some day become the graveyard of the secular nation he helped found.

For RELIGION & ETHICS NEWSWEEKLY, this is Fred De Sam Lazaro, at the Gandhi Ashram, Gujarat, India.