BOB ABERNETHY, anchor: In the aftermath of 9/11, as many Americans tried to learn more about Islam, much was said about “madrasahs.” They are the Islamic schools, some of which, in Pakistan, taught young men not just the Qur’an but terrorism. Madrasahs, it turns out, have a long and distinguished history in the Islamic world and may hold the key to whether Muslim scholars can once again welcome the ideas of others. Roy Mottahedeh is a professor of Islamic history at Harvard. We asked him to turn essayist and correspondent and tell us about madrasahs.

ROY MOTTAHEDEH (Islamic scholar, Harvard University): The first words revealed to Muhammad, and it says “read or recite in the name of your Lord.” I can see the impulse for learning in the very first words of the revelation. 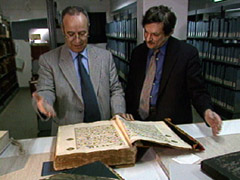 Here we are in a Qur’an school, the first stage of a madrasah education. A madrasah is a place of learning and teaching. These Moroccan children are learning to write and recite the Qur’an as children have done all over the Muslim world since the beginning of Islam.

Most Muslims believe that the Qur’an is a literal transcript of the very words God revealed to the prophet Muhammad. So they consider it extremely important to guarantee that the Qur’an is accurately passed down from generation to generation. When one sees a Qur’an this big, you understand why people needed Qur’an stands. No faithful Muslim would disagree with God’s words. But it is not so easy to know precisely what the intentions behind the divine messages are.

Believers have always struggled with this question. Some thought that religious inquiry should be supervised and limited. Others felt that any person or idea might illuminate God’s meaning.

In Islam, there is no official clergy or final religious authority to settle the question. After the death of the prophet, as the borders of the Islamic world expanded, Muslim scholarship absorbed elements from different cultures — many new ideas passed into the madrasahs and became a standard part of Islamic learning.

The oldest teaching mosque is probably the Qarawyyin, which was founded in Fes, Morocco, in 859. In such mosque schools, young scholars sit on the floor at the feet of one of the ulema, or teachers, just as they did a thousand years ago. They may be studying grammar, logic, jurisprudence, or other disciplines necessary to interpret the Qur’an. 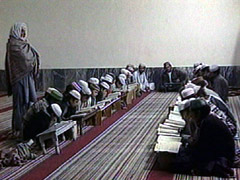 By the year 1100, many of these mosque schools for young men acquired dormitories and became boarding schools. Religious endowments and shops built next to the mosques provided stipends for the students and salaries for the teachers. By the 13th century, the madrasah had become an integral part in the life of any important Muslim town.

The madrasah had great virtues — it gave Muslims a common education, which enabled them to talk to each other across the Islamic world. It incorporated elements of Hellenistic learning, which had been translated into Arabic in the early Middle Ages. Here is the beginning of the second chapter of the book of Aristotle on ethics. Aristotle was so revered that some Muslims claimed he was a prophet, sent by God to the Greeks. Classic madrasah education brought progress and higher learning to the Muslim world.

But, in the 12th and 13th centuries, under continuing threat, first from the Crusades and then the pagan Mongols, the Muslim world began to close in upon itself; the scope of madrasah learning and interest in the outside world also began to narrow. The madrasah, for all its great virtues, also had great shortcomings. There was, after a certain point, fear of new learning. Muslim mathematicians, who passed on from India the all-important zero, continued to develop algebra. But in the madrasah, interest in algebra became confined to explaining the complex assignment of inheritance shares. 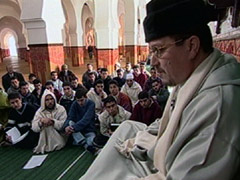 Astronomy was a science where Muslim scholars were brilliant innovators — many stars have Arabic names. But astronomy as taught in the madrasah was limited to those aspects, which explain the direction and times of prayer. By 1400, scholars of the madrasah had grown largely indifferent to ideas from elsewhere. Ideas were no longer fully open to discussion. That the madrasah remained unaware of developments in early modern Europe would have grave consequences for the Muslim world. When Napoleon captured Cairo in 1798, the event became a symbol of the superiority of European military and economic power.

Faced with the humiliation of European colonial domination, some Muslim countries instituted public education independent of madrasah schooling in attempts to “catch up.” But there were some Muslims who blamed the weakness of their societies on the supposed “impurity” of life. They launched a movement for a purified Islam and wanted only what they considered a proper Islamic curriculum to be taught in the madrasah.

The demand for purist schools took a unique turn in the part of Pakistan, bordering Afghanistan, where universal education has never been adequately provided. These strict fundamentalist madrasahs receive foreign support to teach and house young men with few prospects. There, they learn a crude version of Islam and a fierce contempt for what they see as the moral degeneracy of the West. The savage puritanism of the Taliban regime and its emphasis on militant struggle were born in such madrasahs. They claim to have taught 90 percent of the Taliban leaders who ruled Afghanistan until the recent American intervention.

Probably most Muslims want free access to information, as provided by the satellite dishes dotting the roofs of so many houses in medieval Fes, Morocco. And, if they have the resources, the majority of Muslims would probably chose good modern education along with a preservation of their great tradition of learning. To some Muslims, that tradition means unbounded intellectual inquiry. But others reject it in favor of so called “Islamic authenticity.” How these issues will be resolved will undoubtedly have a major impact on the Muslim community, and perhaps on the world as a whole.