BOB ABERNETHY, anchor: In the aftermath of 9/11, the daily headlines talked of bombers in Afghanistan and the search for Osama bin Laden. Away from the headlines, in thousands of homes across the U.S., families were dealing with their very private and personal grief. How many sought comfort in their faith cannot be known. But many who did, found that comfort.

Mary Alice Williams spoke with two of them.

KATY SOULAS: We turned CNN on and smoke was billowing from the building and it was dark and I knew he was up higher than the impact of the plane, and at that point I felt like I was Mary watching Jesus die on the cross. I immediately felt too that it was going to be quicker for him than it was for Jesus.

MARY ALICE WILLIAMS: Katy and Timothy Soulas had been high-school sweethearts, shared a life and five children, with another on the way. Danny will never know his daddy.

Neither will Arielle and Olivia Russin. Four days before they were born, Andrea was with her two-year-old, Alec, when she heard the news bulletins. The plane hit 20 floors below her husband’s office. 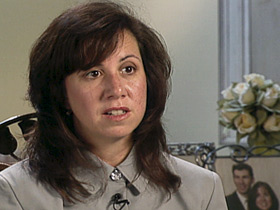 ANDREA RUSSIN: When I dropped my son off at school, I didn’t want to give in to the fact that I needed God. I said, “No. It is not that important. I am not going to stop”. Then I got to a synagogue and the rabbi there gave me some prayers that were supposed to be helpful in bringing Steve home. They didn’t work.

WILLIAMS: Andrea Russin was not alone in questioning her faith in a loving and protective God who could have allowed this to happen.

Ms. RUSSIN: I think that God tried on many occasions to stop everybody who went into those buildings from going into those buildings. If you speak to mostly every family, everybody has a story, I think, that some angels were stronger than others and some people didn’t go to work that day. And there were a large percent of people who were not in that building that day who were supposed to be, and that is how I have justified this.

WILLIAMS (to Ms. Russin): Where does that put Steve? Why did he go?

Ms. RUSSIN: He had to go to work so we could have the time when the babies were born.

Ms. SOULAS: I think in our faith it is important to realize that there are many mysteries in life and we are not going to know the whys — as to why God took Daddy before we were through.

WILLIAMS: What in Catholicism has brought you the most comfort through this time?

Ms. SOULAS: I think it is the fact that we believe in heaven and Tim is with God. And in that sense he is our angel and we can pray to him to help us get through these days. That evening, I felt Tim with me, saying, “I’m okay, I am with God. And I want you to be at peace with that.” And it was a feeling almost of relief. 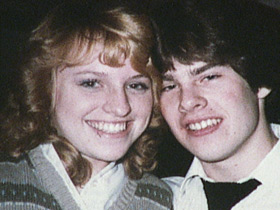 Chaplain (COL) PHILLIP HILL: We look at death as a transition point from this life to the next. Our liturgy reflects that.

WILLIAMS: Army Chaplain Phillip Hill is stationed at the Pentagon. He was there last September 11.

Chaplain (COL) HILL: We believe that once a person leaves this life and is given the opportunity to spend with God — I mean, what better could you want?

WILLIAMS (to Rabbi Eliseo Rozenwasser): Where is Steve?

Rabbi ELISEO ROZENWASSER: That is a very difficult question to answer. And I would say Steve is here. Steve is in what Andrea is doing and Alec and in the twins that were born after September 11. It is not part of Jewish teaching, someone going to heaven and that kind of thing.

WILLIAMS (to Rabbi Rozenwasser): How important is the community in helping the loss of someone like this? 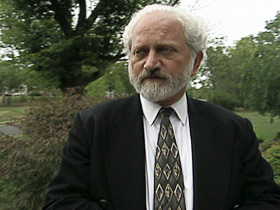 Rabbi ROZENWASSER: I think it is fundamental. Judaism is based on the concept of community. When someone dies and right after burial, the first thing we have is a week of shiva — when the community comes to the house of mourners to comfort them. It is allowing the mourners to have a very clean period in terms of the only preoccupation they have on their minds is to be able to mourn their loss.

Ms. RUSSIN: Theoretically, we had already started mourning, and so I chose to sit for seven days because I wanted whatever prayers were to be said for Steve to be said. And I wanted to make sure that I did whatever I could for him. And for his soul to be able to go on.

WILLIAMS: Andrea’s synagogue organized 70 people per week at two-hour intervals to help out. At one point, there was a three-week waiting period for volunteers.

Ms. RUSSIN: My religious community has been my extended family. They have been there for me when everything was falling apart around me. And having company through the time that is most shocking and upsetting to you, to me was very comforting. People making food and coming and just being part of my life really helped me to transition from having my husband here to having nobody here.

Ms. SOULAS: They made sure there was lunch and tissues and candles burning softly and there was beautiful music, and they gave us an atmosphere that we could go to and feel safe. 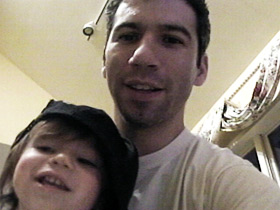 WILLIAMS: In the Jewish tradition, survivors like Andrea often leave an endowment or memorial to their lost loved one, as a way of integrating the person’s memory into the lives of the living and to leave a positive imprint on the world. Andrea’s memorial to Steven is in the works.

Ms. RUSSIN: Steve loved to play. He was a child at heart. I am trying to put up a playground so kids can play on it and be happy. It will be a place where my children would be regularly and I think that it is a living monument rather than a headstone in a cemetery.

WILLIAMS: Andrea’s Jewish community has given her solace and, she says, a renewed faith in human nature. Katy finds strength in her Catholic confidence in the kingdom of heaven.

(to Ms. Soulas): Could you have done this without faith?

Ms. SOULAS: No, absolutely not. I look at people who have said to me, “I wish I felt God the way you do,” and I don’t feel they are as much at peace as I am. Not that I am at peace. I definitely have very difficult times that I am facing, but I see in others more anger. And although I will always have the heartache, I feel that God isn’t giving me anything I can’t handle. 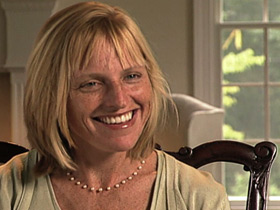 I think my faith has enabled me to realize that God’s plan is different than mine. And that I need to rely on him.

WILLIAMS (to Ms. Soulas): Is it better than yours?

Ms. SOULAS: Of course it is better than mine — though I will question that when I get to heaven. God, I hope I get there. I have a bone to pick with you, God. I have said that to the kids. I have been angry at God. How could you leave me like this? What are you thinking? I don’t like it like this. That’s his plan. We have to accept that and learn what it is we need to take from it and run with it. The choice that I have been given now is to follow him or go astray. To be happy or to be miserable. I would rather be happy.