BOB ABERNETHY, anchor: A WASHINGTON POST-ABC NEWS poll this week asked American whites and blacks whether they support or oppose the U.S. having gone to war in Iraq. Among whites, 78 percent said they support the war. Twenty percent were opposed.

But among African-Americans, just 35 percent supported the war. Sixty-one percent were opposed. 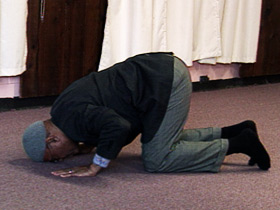 In this week's MUSLIM JOURNAL, the leader of the largest group of African-American Muslims, W. Deen Mohammed, is quoted as saying, "Only the Iraqi people are punished by war, not Saddam Hussein." Mohammed also said he is "strongly against" the war.

We asked correspondent Judy Valente, in Chicago, to visit a mainstream Islamic center and talk with African-American Muslims about the war.

JUDY VALENTE: John Shabazz begins his Friday prayers at the Ephraim-Bahar Islamic Center on Chicago's South Side. His wife, Fatimah, prepares the meal that will follow the service. Each had converted to Islam 40 years ago, before they met. They are opposed to the war in Iraq.

JOHN SHABAZZ: I'm not in favor of the war, seeing innocent people slaughtered, whether they're Muslim, Christian, Hebrew.

VALENTE: But, as Americans, they are conflicted.

Mr. J. SHABAZZ: We're all Muslims. We're all Americans. So we're saying we are American hyphen Muslim -- of equal value.

FATIMAH SHABAZZ: I feel I'm an American Muslim and a Muslim American. That covers it all. Our ancestors paid the price. We paid more than the price to be what we are.

VALENTE: The Shabazzes' 32-year-old son, Omar, is an air force reservist. He has been called up and is awaiting orders to Kuwait.

OMAR SHABAZZ: I consider myself an American citizen that's a Muslim, that's part of a universal brotherhood. There's no such thing as black Muslims. There's only Muslims. We're all one family from one God.

VALENTE: His father, an army veteran who served in Korea and Japan, told his son -- 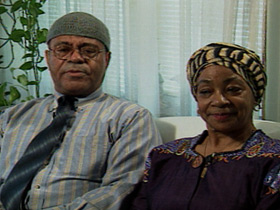 Mr. J. SHABAZZ: I said, "Brother Omar," I said myself, "Personally I wouldn't go. Period. There would be nothing to debate." I said, "But I'm not telling you what to do. You have a mind of your own."

VALENTE: Omar will go to Kuwait if ordered to. A civil engineer, he is unlikely to have to raise his gun against fellow Muslims.

VALENTE (to F. Shabazz): But Muslims have killed Muslims many times. How do you reconcile that?

Ms. F. SHABAZZ: That's on them. Whatever you do as an individual is on you.

VALENTE: Omar says that when he was on active duty, other Muslims were conflicted about being in the military, but were there for training and education. 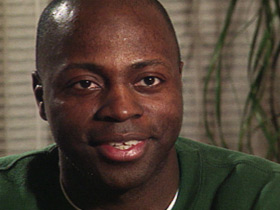 Mr. O. SHABAZZ: It was a tool. You used it for what you needed, and when you finished it you moved on to something else. And I think that's the feeling of a lot of Muslims in the military today. Many of them -- they love this country and they will support this country. But when they see something going on in the east, the first thing they assume is, it's not necessary an attack on terrorism, but it's more of an attack on Islam.

VALENTE: These moderate Muslims are concerned about America's view of Islam.

TARIQ EL-AMIN: America doesn't have a clear understanding of Islam, period, let alone Islam and its relevance to the African-American. There are more commonalities between Islam and Christianity than there are differences. We who call ourselves Muslims, we're no different from the good Christian.

Professor AMINAH MCCLOUD (Author, AFRICAN-AMERICAN ISLAM) Christian ministers, journalists, writers, ministers are all over the radio and the television, casting Islam as evil, casting its followers as evil, and that the world must be rid of them.

VALENTE: Professor McCloud suggests that some African-Americans see Islam being bullied by America.

Prof. MCCLOUD: African-Americans here see the world very differently from other Americans. They see it as an underdog. There's still lots of racism.

VALENTE: At this prayer service, many black Muslims were suspicious of America's motives in Iraq -- and saddened at the loss of life. But do they think it is a war against Islam?

VALENTE: What do you think it's about? 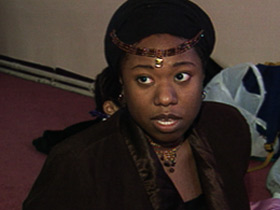 Ms. MUHAMMAD: I don't know. Probably control -- having more control of other countries, but not really about Islam.

Mr. EL-AMIN: You put in a democracy that is favorable to American interests and foreign interests ... but I think it is real nearsighted to simply say it is a war against Islam.

VALENTE: Their spiritual leader, Imam Sultan Salahuddin, says his believers were unanimously opposed to the war.

Imam SULTAN SALAHUDDIN: As Muslims we are taught not to be aggressors, and this way it appears our government is being very aggressive. We believe that changes in Iraq, as bad as Hussein is, should come from within. God says in the Qur'an, the Muslim book, that we never change the conditions of a people until they change what's in their hearts.

VALENTE: But now that the war has started, the imam supports the coalition forces.

Imam SALAHUDDIN: Most definitely. We have our sons and daughters in the military, so we definitely support them. We hope for a speedy solution to this problem.

VALENTE: Many Americans are conflicted about the war -- these people, perhaps more than most. Because they are both loyally American and faithfully Muslim.