LUCKY SEVERSON, guest anchor: It may be hard to believe that, in the latter half of the twentieth century, institutions run by Roman Catholic nuns could amount to virtual prisons -- for young women who had committed no crime. Some of the women spent their entire adult lives in these places. They were called the Magdalene Laundries, and they were in Ireland. A newly released film is based on their story. Mary Alice Williams reviews it for us.

MARY ALICE WILLIAMS: The last thing the Catholic Church needed was to have one of its darkest eras illuminated. But THE MAGDALENE SISTERS does just that, demonstrating how people of God perverted his love into a cudgel. Set not in the Dark Ages or even Victorian Ireland but in 1964, it chronicles the lives of three Dublin girls: Rose, an unwed mother; Bernadette, an orphan too frisky for Mother Superior's blood (deemed a temptress); Margaret, a rape victim. 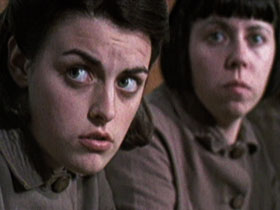 They were sentenced by their parents and pastors, with neither due process nor defense, to slave in the Magdalene Laundries, established by the Catholic Church to cleanse the sins of impurity from these women's souls.

SISTER BRIDGET: The philosophy here at Magdalene is a very simple one. Here you may redeem yourself working beyond human endurance to remove the stains of the sins you have committed.

WILLIAMS: This earthly place where they could attain heaven was, in fact, a descent into a hell: equal parts sweatshop and prison .

These girls were lost, all right -- lost to mercy, compassion, even human dignity.

BERNADETTE: What in God's name have we done to deserve this? Having a baby's not a crime.

ROSE: Having a baby before you're married is a mortal sin.

BERNADETTE: All the mortal sins in the world wouldn't justify this place.

WILLIAMS: The film is an indictment not only of the Irish Church's sanctioned cruelty but of a society that knew and looked the other way. The victims and their oppressors, masquerading as consecrated religious, kept their mouths shut. So no one delivered them from evil.

MARGARET: You must remember that you'll be out of here one day.

BERNADETTE: When? Next week? Next month? Next century? 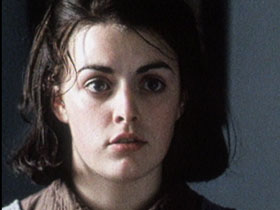 SISTER BRIDGET: I think I can safely say it will be quite some time.

WILLIAMS: Over a century, 30,000 women were condemned to lives of despair in the Magdalene Laundries. Some grew old and died there, isolated, friendless. The last one closed only a few years ago.

BERNADETTE: I'm just wondering why I'm here. I've not committed any crimes. I've never been with any lads ever. It's God's honest truth.

WILLIAMS: This exposé is so merciless that the Vatican condemned it as a "rancorous provocation" -- but didn't deny the unholy truth of it. And the Sisters of Mercy, who ran at least three of the laundries, apologized to the victims.

THE MAGDALENE SISTERS may not be the summer blockbuster, but it is another hit -- for a Church hierarchy already shamed by scandal.

In the latter half of the twentieth century, institutions run by Roman Catholic nuns could amount to virtual prisons for young women. Some spent their entire adult lives in these places. They were called the Magdalene Laundries, and they were in Ireland. THE MAGDALENE SISTERS chronicles the lives of three Dublin girls living in the Laundries.