BOB ABERNETHY, anchor: The Supreme Court convenes on Monday — at least, most of the court does. Tim O’Brien looks at the cases the justices will consider. 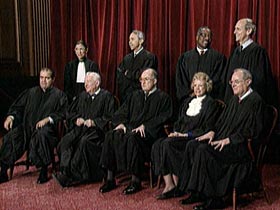 TIM O’BRIEN: From the first bang of the gavel on this first Monday in October, the role of religion in our society will be on display. The justices will sit — but they won’t be hearing arguments in recognition of Yom Kippur, the holiest of Jewish holidays. That has not happened before.

The court’s two Jewish members, Ruth Bader Ginsburg and Stephen Breyer, are expected to take the day off.

One of the earliest issues the court will have to confront involves the Pledge of Allegiance in public schools. Students clearly do not have to participate. But an appeals court in California ruled merely standing by while classmates pledge allegiance to “one nation, under God” violates separation of church and state.

Congress added the words “under God” back in 1954, at the peak of the Cold War, in part to distinguish the United States from what was called “godless Communism.” But last February the lower court found that adding those two words “impermissibly takes a position with respect to the purely religious question of the existence and identity of God.”

The case involves a theology student at Northwest College, a Christian school in Kirkland, Washington. Because the state constitution prohibits any aid to religion, students majoring in theology are disqualified from competing for a state-sponsored scholarship. The lower court ruled that singling out theology majors for exclusion violates their First Amendment right to the free exercise of their religion. 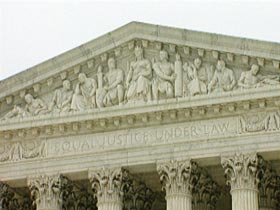 There are some issues that seem to return to the court every year — issues that sharply divide the justices just as they do the country. Religion is one of them; the death penalty is another. It’s mentioned several times in the Constitution itself and it still enjoys broad popular support. So the court is not going to find capital punishment unconstitutional per se — but there are lingering questions about the ability of our justice system to implement it fairly.

There are currently more than 3,500 inmates on Death Row in the United States. The court has agreed to consider the case of one of them: Delma Banks, who has been on Death Row in Texas longer than any other inmate — more than 20 years.

In what could be a made-for-TV drama, Banks was within 10 minutes of being executed last spring when the high court agreed to consider his claims that prosecutors failed to turn over exculpatory evidence and that he was also denied the effective assistance of counsel.

The biggest news from the court on its first day, Monday, will be in the cases it doesn’t take. Nearly 2,000 cases have been submitted for review. But the court is selective; most, if not all of these cases will be rejected. Denying review sets no binding precedent for other courts to follow. But whatever the lower court had ruled stands. It’s the justices’ way of saying yes by saying no.

Same-Sex Marriage and the Supreme Court