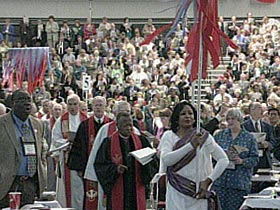 BOB ABERNETHY, anchor: The United Methodist Church — the second largest Protestant denomination in the U.S. — opened its 11-day-long General Conference in Pittsburgh this week. The highest legislative body of the church meets only every four years. This time, gay issues are expected to dominate, as Kim Lawton reports.

KIM LAWTON: Nearly a thousand delegates from all over the world have gathered to set the agenda for the United Methodist Church. They are addressing a host of issues, from Iraq to racism and church finances, and most contentious of all, the denomination’s opposition to homosexuality. 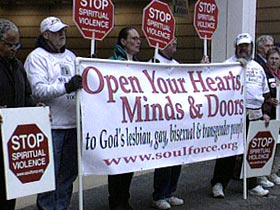 MARK TOOLEY (Institute on Religion & Democracy): We’re confident that the conference here will once again reaffirm the historic church teachings on marriage and sex. But we’re hoping the conference will go beyond that and have something to say about enforcement and accountability.

LAWTON: Meanwhile, gay rights advocates are trying to change language in the church’s BOOK OF DISCIPLINE, which says that homosexuality is “incompatible with Christian teaching.”

Rev. PHIL LAWSON (Retired United Methodist Minister): We want those words deleted. Those words are used by many people to do violence against gays and lesbians and transgender people.

LAWTON: Vigorous debate is expected before the meeting ends on May 7. I’m Kim Lawton reporting.