BOB ABERNETHY, anchor: Sharp debate over homosexuality this week at the General Conference of the United Methodist Church, the nation’s second largest Protestant denomination. Nearly 1,000 delegates — half of them laypeople — were in Pittsburgh for the church’s national meeting, which occurs once every four years. U.S. mainline denominations are all deeply divided on gay issues. Last year, the U.S. Episcopal Church consecrated an openly gay bishop. But the United Methodists this week stood firm in their opposition to homosexuality. 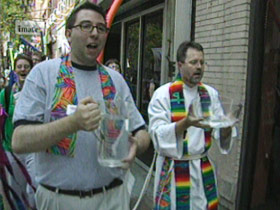 In a series of votes, United Methodist delegates reaffirmed their church’s traditional policy, which says the practice of homosexuality is “incompatible with Christian teaching.” They said marriage should be between one man and one woman, and they maintained a ban on “self-avowed practicing” homosexuals in the pulpit.

Gay rights supporters sponsored several demonstrations urging their church to change those policies. But they were defeated even on a resolution that would have officially acknowledged for the first time that Christians disagree whether homosexuality is compatible with Christian teaching.

JOHN EDGAR (Delegate, Ohio): What we need to do is recognize that it’s not just the thousand delegates here, but the eight million United Methodists and all of the millions of folks we’re trying to reach are in very different positions on this issue.

ABERNETHY: Gay rights advocates did win one partial victory. The church’s Supreme Court ruled that it lacked the authority to reconsider the case of the Reverend Karen Dammann, an openly lesbian minister who was acquitted of violating church law. At the same time, the court warned that disciplinary action may be taken in the future against any bishop who ordains or appoints a practicing gay minister.

While conservatives have the momentum, many of them say the deep divisions still threaten their church’s future. 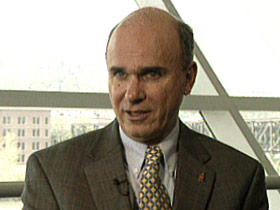 PATRICIA MILLER (Delegate, Indiana): I think we clearly are a schismatic church now. It’s just we’re continuing to try to live in the same house, if you will, and the same church. But we are clearly schismatic.

ABERNETHY: Some conservative grassroots activists began exploring the idea of a formal split along conservative-liberal lines. United Methodist leaders said no split is imminent. They said debate over important issues is healthy.

Bishop PETER WEAVER (President, Council of Bishops): This is nothing new. This, in fact, I think, strengthens the church when we can be having vigorous, respectful, and loving — but vigorous — conversations about what is God’s will for our life and for our church in this time of our history.

ABERNETHY: Those conversations will go on. Gay rights supporters have pledged to continue seeking change.