BOB ABERNETHY, anchor: U.S. Episcopal bishops this week pledged to seek unity within their deeply divided denomination. The pledge came at the bishops’ annual fall meeting, held this year in Spokane, Washington. The U.S. Episcopal Church and the Anglican Communion were thrown into crisis last summer, when the U.S. Church approved its first openly gay bishop. A panel studying how the international church can avoid schism will release its report on October 18. Kim Lawton has our story.

KIM LAWTON: The theme of this year’s House of Bishops meeting was reconciliation … finding unity in the midst of profound cultural and theological differences. In a statement written to the Episcopal Church at large, the bishops said, “We are confident that our household of faith is large enough to embrace us all.” But they also acknowledged that anger, anguish, and division have been on the rise over issues of homosexuality. 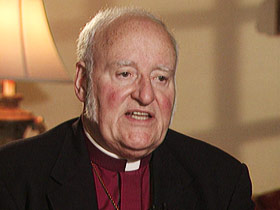 Bishop EDWARD SALMON JR. (Diocese of South Carolina): I said, it’s like being in a train wreck.

LAWTON: About 130 bishops attended with their spouses, down from the numbers who attended previous meetings. Several prominent conservative bishops boycotted, unwilling to participate with the body that approved the consecration of Bishop Gene Robinson of New Hampshire — the church’s first openly gay bishop. This frustrated many of their fellow bishops.

Bishop J. JON BRUNO (Diocese of Los Angeles): It’s pretty hard to have differences of opinion if there aren’t two people willing to state their positions and express their differences looking for a place of resolution.

LAWTON: Bishop Edward Salmon of South Carolina was one of the conservatives who did attend.

Bishop SALMON: I came here committed to present what I thought needed to be said, and I’ve done that, and I’ve tried to do that with grace and with clarity, and I am very clear about where we stand in the diocese.

LAWTON: Where he and others stand is still refusing to accept the church’s decisions on homosexuality. But whether they’ll still be part of the U.S. Episcopal Church depends heavily on the report of the so-called Lambeth Commission appointed by the Archbishop of Canterbury.

Presiding Bishop Frank Griswold urged conservatives and liberals to be open to whatever the report has to say. 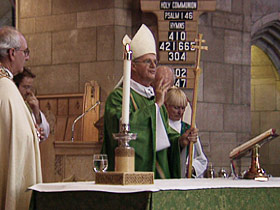 Bishop FRANK GRISWOLD (Presiding Bishop, U.S. Episcopal Church): I would have the church adopt a spirit of graciousness and eagerness to receive the work of the Lambeth Commission because the Lambeth Commission was set up not so much to solve problems, but to help the Communion in all its diversity figure out how it can live with difference.

LAWTON: Conservatives want strong recommendations — perhaps a rebuke of the U.S. church or a call for Robinson to leave his post. But others say there is only so much the nonbinding report can do.

Bishop BRUNO: How do you undo a confirmation — where a bishop lays their hands on a person’s head and make them unconfirmed? We don’t have the privilege of backing up too far.

LAWTON: Once the report is released, bishops will hold regional meetings to discuss it. The entire House of Bishops will meet again in January to consider their response.