BOB ABERNETHY, anchor: We have an update this week on the tragedy in Darfur, in western Sudan, where a perfect storm of religious, racial, political, military, and environmental conflicts produced warnings, only a few months ago, of a humanitarian disaster. But that has been averted for now by a massive relief effort. The situation is still dangerous -- especially because of marauding fighters called the Janjaweed. But refugees are being cared for, as Fred de Sam Lazaro reports.

FRED DE SAM LAZARO: She's 20, widowed, and five months pregnant as a result of rape. Her anguish is masked by shyness -- her ordeal the legacy of Darfur's brutal civil war. 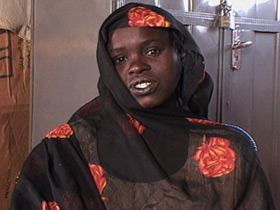 UNIDENTIFIED RAPE VICTIM (Through Translator): I went with other women to collect firewood. While we were collecting the wood we were surrounded by some Arabs. We all ran, but two men caught me and raped me.

DE SAM LAZARO: For women, gathering firewood for cooking fuel is a perilous chore. They are black Africans pursued by people they call Arabs. Sudan's Arab-dominated government has battled black-led rebel groups in Darfur for at least two years.

DAHABIYA SIRRI (Refugee) (Through Translator): It's become common. These people come and ambush us. They rape us. We're very afraid any time we leave the camp. We are very worried here. We cannot sleep at night because the Janjaweed can come at any time and take our daughters and can take our women.

DE SAM LAZARO: Even with the threats and sporadic violence, relief agencies say the situation in Darfur has improved considerably in recent months. When refugees began to arrive late in 2003, there were fears of mass starvation and disease -- all at a time the world seemed preoccupied elsewhere. 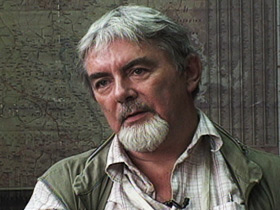 MIKE MCDONAGH (Officer, UN Humanitarian Affairs): It was at the same time as the Iraq war was going on, so the cameras of the world were away from it. We were talking about a problem that was put up in front of us in some of the roughest terrain in the world just after a tenuous cease-fire had been signed.

DE SAM LAZARO: But McDonagh says the international community did heed the alarm, brokering two cease-fires and trucking in millions of tons of food, much of it American. For now, the feared humanitarian catastrophe has been averted, thanks to this mass infusion of aid.

Today, children attend schools. When they're ill, there are camp clinics. Ironically, their nutrition and health is better than it was prior to the conflict in this impoverished region.

Some 10,000 aid workers have come to Darfur, from dozens of agencies. One of the earliest was Islamic Relief. It is funded largely by Muslims in the West. And because many staff are called as much by faith as professional skill, Islamic Relief works in places many secular groups find too dangerous.

Dr. MOHAMED ABU MAGD (Islamic Relief): If the local staff is willing to stay and willing to take risks, we encourage it. From that point of view, it did help us go into the hardest and most difficult places in the world.

Dr. ABU MAGD: Such as here, such as Iraq and most of [the] countries left, such as Afghanistan, such as Chechnya, such as Kashmir, and the list goes on and on.

DE SAM LAZARO: However, despite the foreign aid and the cease-fire agreements, Darfur remains a dangerous place. The UN says about 200 people are killed each month. Other estimates are higher. Even international aid camps cannot shield residents.

UNIDENTIFIED REFUGEE (Through Translator): We have been attacked by the Janjaweed more than four times. They have stolen sheep, horses, people's belongings.

DE SAM LAZARO: The tension and underlying conflict perplexes many outsiders and Sudanese. Black and Arab -- they're distinguished more by occupation than appearance, and both are Muslim. They have a history of mostly peaceful coexistence. 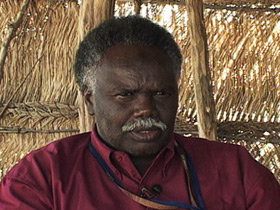 DE SAM LAZARO: El Tayeb, an Oxford-trained expert and Sudan native, says tensions have risen in recent years amid drought and encroaching desert. The Arabs, who are nomadic herders, have moved their cattle into cropland farmed by blacks.

Mr. EL TAYEB: And that's why the farmers fight back, to say, "No, no, it is not your animals, it is my crop." And somebody will not sit and say, "No, no, I cannot see. Okay, in that case, I'll keep my animals here to die of hunger."

DE SAM LAZARO: He says such issues used to be resolved locally, usually by arbiters from tribes not involved. This time, however, the government intervened on the side of the Arabs, arming and allying the Janjaweed in its war against the rebels. The mass killing has been widely condemned; former Secretary of State Colin Powell called it genocide, and the UN wants to try leading figures in international courtrooms. Sudan's government insists it can try war suspects in its own courts. It also denies culpability.

DE SAM LAZARO: However, most international observers blame the government and Janjaweed militia for the atrocities. The blame aside, the fighting has made marginal land even less productive. Food production has been wiped out across a vast region and will take years to recover. One idea to restore security is to increase the presence of African Union or AU troops, who come from all parts of the continent. Right now, just 2,300 troops patrol an area the size of France. 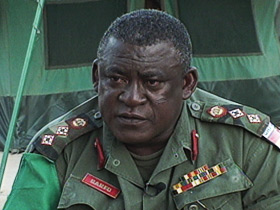 Colonel LORD SARFO (Section Commander, African Union): The greatest challenge is the terrain. Short distances by you take about, say, two hours to cover a journey of only 40 kilometers. And here to use a helicopter would be a waste of resources.

Mr. MCDONAGH: If we pay now for these extra AU troops, we may not have people in camps feeding farmers free food day in and day out for years to come. I mean, that may be the alternative. The bill for Darfur for this year is over $600 million. If we can get these extra AU guys, if they can be spread out across Darfur, they'll bring confidence.

DE SAM LAZARO: For now, as sporadic fighting and banditry continue, it could take a long time to convince refugees like Sawah al Mansur that it's safe to return. She lost her husband when her village was raided and fled to this camp with her four children. Here, there's some security and enough food. Still, she'd like someday to return home where, she says, she had her dignity.

SAWAH AL MANSUR (Refugee) (Through Translator): I didn't used to live in a place like this. In my house I had a bed and many other things. Now I have nothing. In the village I used to be independent, I didn't depend on anybody, and now I have to depend on others for everything. I can't even change my children's clothes. This is all we have.

DE SAM LAZARO: And a key question is how long she'll get even that. Even though the U.S. has pledged more food aid and the African Union said it plans to increase its troop presence, no one expects these refugees to return home anytime soon. Relief agencies also worry that in a world distracted by other crises, this region, isolated with limited media access, will slip from the world's consciousness and back to the brink of a humanitarian catastrophe.

For RELIGION & ETHICS NEWSWEEKLY, this is Fred De Sam Lazaro near Geneina in western Sudan.

In Darfur, in western Sudan, a perfect storm of religious, racial, political, military, and environmental conflicts produced warnings of a humanitarian disaster. But that has been averted for now by a massive relief effort. The situation is still dangerous, especially because of marauding fighters called the Janjaweed, but refugees are being cared for.