BOB ABERNETHY, anchor: Finally, Lucky Severson has a story about a man in Los Angeles who takes very seriously his calling to help the poor -- around the world and also in his own backyard. And, trying to help the poor, he is becoming pretty close to poor himself.

LUCKY SEVERSON: By most standards, Gerry Straub's career is in a tailspin. His earnings, he says, have dropped from $10,000 a week to about $300, but he's not complaining.

SEVERSON: He's let go of almost everything, except his work, which has become his obsession and now his mission. Straub makes documentaries about the world's poverty, hoping it will motivate us to do something about it. This is from one of his films called RESCUE ME. 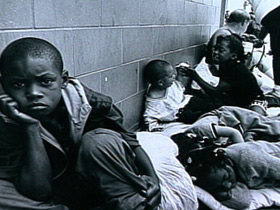 SEVERSON: The World Bank estimates that one in six of us -- that's 1.1 billion people -- live in extreme poverty worldwide. Eight million people die each year because they don't have the food, water, medicine, or other necessities we take for granted. That means on average, because of poverty, 20,000 people died today and yesterday and will again tomorrow.

SEVERSON: Straub says he has found his Catholic faith again, after losing it somewhere along the way. As a younger man, he earned lots of money and recognition producing daytime soap operas like the popular GENERAL HOSPITAL. But he says he was unfulfilled. He turned against organized religion altogether after his stint as producer of the Christian Broadcasting Network's 700 CLUB. By then, he says, he was spiritually empty and searching for truth. He found himself in a church in Rome, reading Psalm 63, about a soul searching for God.

Mr. STRAUB: Something happened. I just felt this presence of God. I just was overwhelmed by this sense of love. And then I remember getting up, and I bowed before the crucifix in the tabernacle and just, like, electricity went through my body. 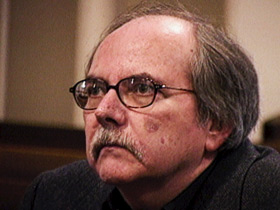 SEVERSON: In that moment, he says, he was transformed from an atheist to a pilgrim, on a journey to lend a voice to those he says Christ identified with most -- the poorest and least among us. His belief, at its core, is that to get close to God, you must first get close to the poor.

(From Film RESCUE ME): Who are these people we call poor, people we so easily judge and dismiss? They are Jesus in a distressing disguise. In the faces of the poor, we see the face of Christ, and we are called to love them with the criteria with which we will be judged.

SEVERSON: Straub has shot and produced eight documentaries in 11 countries. He's focused his lens on everything from lepers in Brazil to the 75,000 people who eke out a life at the mountain of garbage known as Payatas outside Manila. He has formed a nonprofit foundation called San Damiano, named after the church where St. Francis of Assisi committed his life to those who have the least. Not surprisingly, St. Francis is his hero. Straub's videos are shown at fund raisers, and the proceeds go to Christian charities working with the poor. 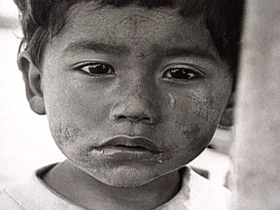 In this country, Straub did not have to go far to find poverty -- his backyard. Fifty square blocks of misery in downtown Los Angeles known as Skid Row. Mr. STRAUB (From Film RESCUE ME): On these streets, you will find more agony than angels. On these streets, you are closer to hell than heaven.

SEVERSON: On any given night, one million Americans are homeless. Ten thousand of them live on Skid Row -- strung out, hungry, and afraid.

Mr. STRAUB: The amazing thing about being on Skid Row was to learn just how many women and children were living on the streets. How many people that were not alcoholics, that were not drug addicts, that the bottom simply fell out. I mean, you began to see how many people are just a paycheck or two away from having nothing.

UNIDENTIFIED HOMELESS WOMAN (From Film RESCUE ME): Well, I just want to be able to make decisions for myself, you know. I'm a grown person. I've worked before. I want to work again. I like working. I want to do the kind of work I was doing before, like a nurse's aide, whatever.

SEVERSON: Ralph Plumb is a former director of the Union Rescue Mission in the part of L.A. that is Skid Row. He says Straub spent so many months among the poor, they came to trust him. 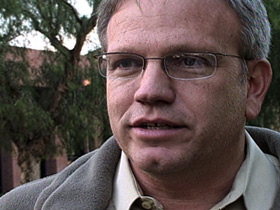 RALPH PLUMB (Former Director, Union Rescue Mission): Whereas in the initial stages, they might have been defensive or maybe even taken a swing at him or told him to get lost, over time he really expressed his compassion for the people, and they wanted to talk to him because they had a story to tell.

SEVERSON: Straub says the Skid Row experience taught him that being poor in the United States is actually worse than in other countries where people are surrounded by poverty.

Mr. STRAUB: Mother Teresa said something about that years ago, that she thought the poverty in America was really the worst she had ever seen, and I thought to myself after being in Calcutta, I said, "What could she have been thinking?" Well, it was the spiritual poverty here, not only just for us -- I mean people who have money -- but the poor and the homeless, I mean, really live lives of isolation, lives of rejection, lives of deep shame.

SEVERSON: Straub says he has never witnessed, among the affluent, the generosity he's seen among the poor.

Mr. STRAUB: In the slums you saw real life. You saw, you know, real life-and-death struggles. You saw incredible acts of humanity -- the generosity of the poor, one to each other and to me. You know, it just knocked me over.

SEVERSON: Sometimes the suffering is simply overwhelming. This little boy called Moses, for instance, from El Salvador is inflicted with an incurable blistering disease.

Mr. STRAUB (From Film RESCUE ME): Yet all the suffering in the world was for me embodied in this one small, fragile boy. Moses is without a doubt the saddest person I have ever seen.

I struggle with doubts every day I see little Moses, and you know, there are times I get so overwhelmed by the suffering that I really can't help crying. Does it cause me to doubt God? No. It just causes me to go deeper into that suffering. I think that's what Christ was about.

SEVERSON: His home is his sanctuary, where he meditates and prays and braces himself for his next project. Straub says his obsession to help the poor is slowly forcing him to the poorhouse, but it's a price he's willing to pay.

Mr. STRAUB: I'm on the verge of losing my house. I mean, I worry about those things, but I do have great confidence that I am doing what I am supposed to do and that things will work out. Christ isn't looking for us to give our spare change. He wants us to give our very lives.

By most standards, filmmaker Gerry Straub’s career is in a tailspin. His earnings have dropped significantly, but he’s not complaining. He believes that happiness is measured not by what you earn, but by what you are able to give away. He’s let go of almost everything except his work. Straub makes documentaries about the world’s poverty, hoping it will motivate us to do something about it.