BOB ABERNERTHY, anchor: Last week (November 18) in Germany, several of the concrete slabs at Berlin's memorial to the Holocaust were defaced by vandals -- yellow Stars of David [were] painted on them, symbols of Nazi anti-Semitism. In spite of such incidents and other difficulties, the number of Jews moving to Germany has been going up dramatically, along with accompanying efforts to help them recover a sense of Jewish identity. Bob Faw of NBC News has the story for us. 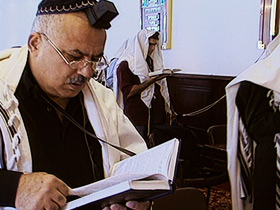 BOB FAW: It is remarkable. In the country which systematically tried to exterminate all Jews, not only is Jewish music flourishing; so is the practice of Judaism. In the last 15 years, the number of Jews in Germany has gone from 28,000 to well over 200,000. It's all part of the country's policy to rebuild Jewish communities destroyed by the Nazis. Attracted by generous social services, many came from Eastern Europe, especially the former Soviet Union, like Boris Schapiro.

BORIS SCHAPIRO: I looked for my way to God, and in Russia I was not able to find it. I think that it's objectively not difficult to be a Jew in the modern Germany.

FAW: And the renaissance of Jewish life isn't just for the older generation. At this American-run Jewish school in Berlin, enrollment has surged 400 percent -- every year.

Rabbi YEHUDA TEICHTEL (Chabad Lubawitsch Berlin): Many children have never seen what a synagogue is, what a prayer service is. Many of them come from Eastern Europe and never had the opportunity to participate in a prayer service. So here we have for children a small mini-synagogue. We have the Torah scroll. You have the place where the cantor stands, and the children come. We try to make the Jewish tradition open for them, interesting in a modern way. 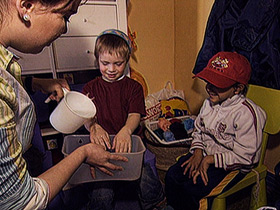 FAW: Nothing, perhaps, is more ironic. This German capital, the headquarters of the "final solution" which after 17 often stormy years of debate finally erected this memorial to the Holocaust, is now home for one of the fastest-growing Jewish communities. But for Jews moving here, it hasn't always been easy. Unemployment remains high -- 40 percent of Russian Jews are reportedly unemployed. And in one recent survey, more than half of Russian Jews complained their relationship with Germans is "unsatisfactory."

Professor OLAF GLOCKNER (Moses Mendelssohn Center for European-Jewish Studies at Potsdam University): They are not really accepted by a veteran population.

Professor GLOCKNER: It's very difficult for them to make friendships with Germans, and they say one point is that they feel not familiar with the German culture, but they see Germans also as arrogant and as not accepting the immigrants.

JURI DAVID PERSITS: The German society is hostile toward foreigners as a whole, and we should also not forget the anti-Semitic background which is still there and unfortunately only increasing in the last years.

FAW: Kostja Levit, who moved here from Ukraine 15 years ago, is now a successful computer programmer. Growing up, he didn't practice his religion. 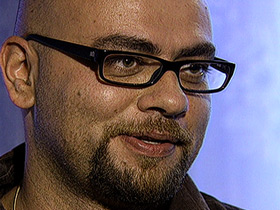 Mr. LEVIT: No one told me that I am Jewish.

FAW: Levit is sending his six-year-old son Samuel to a Jewish school.

(to Mr. Levit): You would hope your son learns eventually to become Jewish, more Jewish?

FAW: Levit says he's comfortable as a Jew in Berlin. So, too, is Inge Deutschkron, who was persecuted by the Nazis and forced into hiding. She later fled, only to return. Even though now, 60 years after the Holocaust, there are some neighborhoods she will not enter because of bad memories.

INGE DEUTSCHKRON: There are places in Berlin where I don't go to, where things happened which touched me very much at the time.

FAW (to Ms. Deutschkron): It's too painful?

FAW: But most Jews here are looking forward, not back. Not only is this school growing, but Orthodox Jews from America who operate it are now building a large community center with a library and synagogue for children. 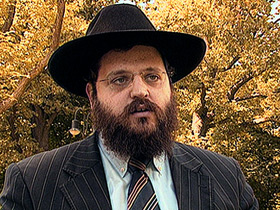 Rabbi TEICHTEL: I will never encourage a Jew to move to Berlin from a different place, but if a quarter of a million decided to, we will do everything we can to help them have a Jewish identity. That is our answer, and that is our proof that -- am Israel chai -- that the Jewish spark lives.

FAW: It is a theme echoed both by those who feel the burden of what happened to Jews in Germany.

FAW: Echoed too by those who care more about retaining their cultural heritage than embracing their religious faith.

Mr. LEVIT: Hitler tried to eliminate Jews here and everywhere, and I think it's very important to show that doesn't make it.

FAW: Their presence 60 years later [is] living testimony to what Rabbi Teichtel's grandfather once admonished him:

Rabbi TEICHTEL: "Go, go to Berlin. Go to the place where Hitler tried to eradicate Judaism, and rebuild it." And he said to me the greatest revenge we could take on Hitler is in the very same place where he tried to wipe us out. We are there to rebuild it.

FAW: Jews in Germany, repudiating the past by affirming the present.

For RELIGION AND ETHICS NEWSWEEKLY, I'm Bob Faw in Berlin.

In Germany, several of the concrete slabs at Berlin’s memorial to the Holocaust were defaced by vandals. In spite of anti-semitic incidents and other difficulties, the number of Jews moving to Germany has been going up dramatically. Also growing are the accompanying efforts to help them recover a sense of Jewish identity.