BOB ABERNETHY, host: As the weather grows colder and the holidays approach, we have a segment about young people of faith seeking to help those without shelter. We visited with the young adults of Sixth & I Synagogue in Washington DC, who served breakfast to the homeless in partnership with the interfaith group So Others Might Eat. Rabbi Scott Perlo was our guide. 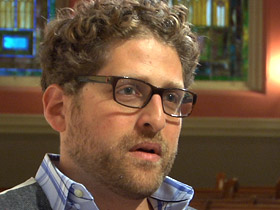 RABBI SCOTT PERLO (Associate Director of Jewish Programming, Sixth & I Historic Synagogue): I think for the generation of Jews we work with here, the young professionals, social justice is their faith. In Judaism, we have this idea that obligation comes before analysis, and there’s lots of stuff that you do just because you have to do it, and then you sort of figure out the why of it.

We have, I think, at the last count something like 6,800 homeless people in the District, not to mention a huge problem with youth homelessness here. We don’t have nearly enough beds for teens and youth who are homeless on the street. We live, we work downtown. This is our spiritual community. On some level it would just be pretty egregious of us not to get involved.

Basically Torah, which is both for our holiest book and the assembled vast collection of Jewish wisdom—Torah, Torah is human dignity, and if it’s not human dignity, it’s not Torah. The idea of being able to feed those who haven’t been fed, to clothe the naked, and to house the homeless, I think, is probably the spiritual apex of what the Torah is trying to teach. Everybody here is gifted with a soul that was fashioned in God’s image, which is to say of divine eternal worth, of a worth that can’t ever be taken away, which is the reason that if someone needs help from me I really have to give it, because they are worth, in God’s eyes, just the same as I am.

Rabbi Scott Perlo of Sixth & I Historic Synagogue in Washington, DC and a group of young Jewish professionals serve breakfast to the homeless for the interfaith group So Others Might Eat, and Rabbi Perlo explains the connection between Jewish faith, social justice, and the Torah.