KIM LAWTON, guest host: In some observant Jewish families, a little boy’s first haircut is more than just a haircut. It marks the beginning of not only his formal education but also his obligation to keep the commandments and perform mitzvoth — good deeds. The ceremony itself is called the “upsherin.” We were invited to Berel Shmotkin’s upsherin ceremony at the Stepping Stones Museum for Children in Norwalk, Connecticut. Our guide to the event was Rabbi Yisrael Deren.

Rabbi YISRAEL DEREN (Director, Chabad Lubavitch, Fairfield County, CT): The upsherin is a ceremony that marks a little boy's third birthday. It marks the beginning of a little boy's formal education. As far as we are concerned, there is nothing more important than education.

The Bible talks about a human being, referring to a human being as "ki haadam etz hasadeh" — the man's compared to a tree in the field. From an educational perspective, a tree grows best when it has deep and solid roots.

Now, we find with the tree, the Bible tells us that the first three years, its fruits are not to be eaten. We sort of extrapolate from there -- from a mystical perspective -- and wait three years before we cut a little boy's hair for the first time. 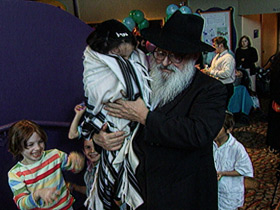 We've actually combined two ceremonies at once here, because another tradition that we have, which is that a child, upon beginning the educational process, is brought into the schoolroom wrapped in a tallit, a prayer shawl. When Berel was brought in, the assembled showered him with sweets — the notion that his life should be a sweet one.

And a chart with the Hebrew alphabet is placed before the child, and the teacher will take some honey and smear it on the first letter of the alphabet and let the child lick from the honey, symbolizing the notion that learning is a sweet experience, learning is a delightful experience.

One by one, everybody walks up to Berel and takes a snip of his hair. The haircutting itself becomes an educational experience. It's a mitzvah, where you cut the hair and you leave the payot, the hair along the side. And the central message here — that every aspect and every element of our lives ultimately can be endowed and therefore must be endowed with a higher and divine purpose, so that even a haircut acquires a religious significance.

Traditionally, the child has a couple of coins that he gives out to everybody who comes over and encourages that person to give that coin to charity. In fact, what he or she simply is really doing is "tzedakah" — righteousness, the right thing, the proper and appropriate thing...

Rabbi DEREN: ...which is to take what we have and use it to make the world around us a better place. So he's helping somebody else do the mitzvah. The other person is doing the mitzvah and, meanwhile, acts of goodness and kindness begin to multiply. Now imagine if everybody walked out of here and encouraged another couple of people to do that and they, in turn, encouraged another couple of people to do that. We believe that every human being truly does have the ability to change the entire world, one good deed at a time.

In some observant Jewish families, a little boy’s first haircut is more than just a haircut. It marks the beginning of not only his formal education but also his obligation to keep the commandments and perform mitzvot — good deeds. The ceremony itself is called the “upsherin.”