BOB ABERNETHY, anchor: At Old St. Patrick’s Roman Catholic Church in Chicago last weekend (February 11), Valentine’s Day was observed not with flowers or chocolate, but with what’s known as the Mass for Lovers. It’s a Mass in which hundreds of couples renew the vows they made to each other — in this group, from two months to more than 50 years ago. We hear about it from two of the participants, Jack and Kathy Berkemeyer.

KATHY BERKEMEYER (Parishioner, Old St. Patrick’s Church): This Mass has been going on for about 18 years.

JACK BERKEMEYER (Parishioner, Old St. Patrick’s Church): There’s something powerful for the two of us to be together with 350 other couples committing ourselves to each other again.

Ms. BERKEMEYER: For me personally, it’s so encouraging to be surrounded by people who believe in marriage, who are working at it, who love each other. 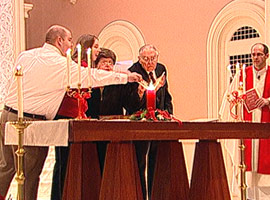 Reverend THOMAS J. HURLEY (During Mass, Old St. Patrick’s Church): Who perhaps among us has been married the longest? Anyone been married under a year?

Mr. BERKEMEYER: Shortly after Mass begins, the celebrant will determine the couple who’s been married the longest and the couple who’s been married the least amount of time. And those two couples come together and go up to the altar and light the unity candle together. And then all of us light our candles together from that unity candle when we recommit ourselves with the vows.

Ms. BERKEMEYER: The emotion of the moment for me always surprises me — how much it moves me.

Mr. BERKEMEYER (During Ceremony): I, Jack, take you, Kathy, to be my wife.

Ms. BERKEMEYER: Looking at Jack and realizing what a gift it is to have this relationship, to have this marriage, but also to be surrounded by a group of people who are living the same thing. 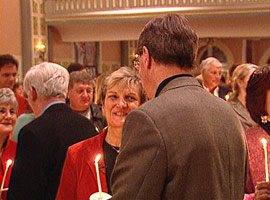 Mr. BERKEMEYER: There may be quite a few couples in that church who really need other couples — to hear other couples making that recommitment. It’s almost as though they need us, and we need them.

Ms. BERKEMEYER (During Ceremony): … all the days of my life.

Mr. BERKEMEYER: After we make that recommitment you can hear about 350 couples all kissing each other at the same time. It’s quite a wonderful experience for all of us.

Ms. BERKEMEYER: It’s always a moving experience to be in that church on a night like tonight.

Mr. BERKEMEYER: It does take a community to really make a marriage good and supportive and loving. And that’s why doing this together is so meaningful for the two of us.