BOB ABERNETHY, anchor: This weekend (July 8-9)--the third foreign trip of Pope Benedict XVI, a brief visit to Spain to attend the Church's World Meeting on the Family. Benedict has urged greater protections for the traditional family, which he says is besieged on many fronts. He has repeatedly called on Catholics to reaffirm their opposition to gay marriage, abortion, contraception and human embryo research.

That message is particularly challenging in Spain, once considered a European stronghold for the Roman Catholic Church. Today Spain, like the rest of Western Europe, has become increasingly secular, and the pope is deeply troubled about that. Just before the Spain trip, a prominent cardinal expressed the Vatican's concern that Europe has become "drunk from secularization." Saul Gonzalez has more from Madrid. 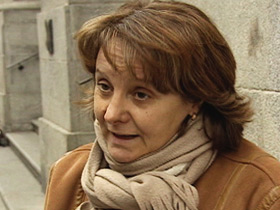 SAUL GONZALEZ: For centuries, Spain was a bastion of fervent Catholicism. Its church leaders created such religious orders as the Jesuits and Dominicans, while the country's explorers and missionaries spread Christianity across oceans and continents. However, in 21st-century Spain, as in the rest of Western Europe, the Catholic Church finds its spiritual and social influence in decline. It's estimated fewer than 20 percent of Spaniards now attend Mass regularly, and those who do are generally elderly. Blanca Castelleano still faithfully goes to Sunday services with a friend, but she acknowledges her congregation has dwindled over the years.

BLANCA CASTELLEANO (through translator): I think the majority of people are still moral, but they just don't pay much attention to religion, nor do they go to church. There just aren't many people who practice their faith anymore - at least it seems that way to me.

GONZALEZ: Many experts say the weakening of the Catholic Church in Spain is attributable to a rapid secularization of Spanish society, especially since the death of dictator Francisco Franco in 1975. Once one of Europe's most religiously and socially conservative countries, with Catholicism as the only state-recognized religion, Spain now has a reputation in Europe as "Sweden South." That's because of the country's openness about sex, the easing of divorce and abortion restrictions, the growth of a large immigrant Muslim population, and the emergence of a vocal gay and lesbian civil rights movement. It's a movement that scored a historic victory in 2005 with Spain's legalization of same sex marriage. Although the change was condemned by the Catholic Church, it had the support of both Spain's ruling socialist party and, according to polls, a majority of the country's citizens.

BEATRIZ GIMENO (Attorney, through translator): This is a very different country compared to the recent past, when the presence of the Catholic Church was total in every way. 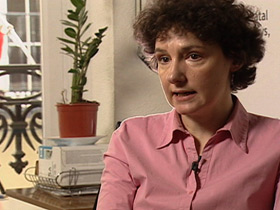 Ms. GIMENO (through translator): When I started this struggle about 20 years ago, we were coming out of the Franco era, and homosexuality was still legally punished. You could actually go to jail for it. And in 20 years we have gone from a time when we could go to jail for being homosexual to where we can now marry and live normal lives.

GONZALEZ: Not all Spaniards, however, are happy about the speed and scope of change in their country in recent decades. They believe too many spiritual values have been replaced by secular ones, and they're starting to fight back. What's at stake in the struggle, they say, is the soul of Spain and Europe.

GONZALEZ: Father Leopoldo Vives Soto is a theologian and spokesman for the Catholic Church in Spain. Like other Catholic leaders, he believes European Catholicism is struggling against a destructive tide of secularism on the continent - one that Father Soto says jeopardizes European families and society. 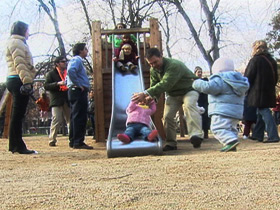 GONZALEZ: One of those effects, says Soto, is demographic. Spaniards, like other Europeans, have largely ignored the Vatican's ban on contraception in recent decades. That's helped lead to a sharp decline in birth rates on the continent. Spain's is one of the lowest in the world.

Father SOTO (through translator): If families don't have children and don't communicate values to those children, well then society, bit by bit, gets weaker. It's like cancer. It's not violent. It's not an illness that kills with one blow, but you have a body that slowly decays.

GONZALEZ: Protesting what they see as an assault on traditional values in their country, such as the legalization of gay marriage, hundreds of thousands of Spaniards took to the streets of Madrid last June.

CARMINA VALDEZ (Protestor, through translator): We are not educating young people about their personal responsibilities. We are saying sexuality is good withoutiving them any sense of responsibility.

GONZALEZ: The key organizer of these protests has been Hazte Oir, a grassroots group fighting for a larger role for religion in Spanish society and politics. Its founder and director is Ignacio Arsuaga. 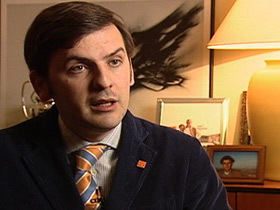 GONZALEZ: Seeking to get faith back into Spanish public life, Arsuaga has looked across the Atlantic and borrowed public outreach and lobbying strategies from politically engaged, conservative evangelical groups in the United States.

Mr. ARSUAGA: They have a very clear view about how to influence politics, and also they know how to use the media. I think it is very good that groups like the Christian Coalition, that here in Spain or in Europe would represent many million people, would have also a voice in public life.

GONZALEZ: Spanish liberals say if religious conservatives and Catholic leaders want a greater role for faith in Spanish society, they must learn to live with new social realities. 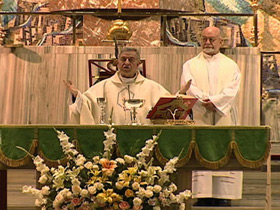 Ms. GIMENO (through translator): They are against divorce, abortion, stem cell research, euthanasia, gay marriage. Well, with so many things that have been accepted by Spanish society, I think the church, or at least the church hierarchy, has lost contact with society. I think if it keeps going like that, Spain will continue to be more secular, and the church will run the risk of ending up talking to practically no one.

GONZALEZ: The tension between secular and conservative religious values in Spain can even spark disagreements between long time church-going friends.

UNIDENTIFIED WOMAN (through translator): In a gay marriage, what kind of moral education can you give your child if you're living with another man? I just don't think that's reasonable.

Ms. CASTELLEANO (through translator): I don't agree with that. I think one's sexuality should have nothing to do with their happiness as a family.

GONZALEZ: Even as Spaniards and other Europeans debate the proper role of the Catholic Church and Christian values on the continent, they know another challenge involving religion grows: how to accept and assimilate Europe's growing Muslim population. In the Spanish capital, the largest house of worship built in recent years wasn't a church, but this mosque and Islamic cultural center.

Spain, once considered a European stronghold for the Roman Catholic Church, has become increasingly secular. The Church finds its spiritual and social influence throughout the country is in decline. It’s estimated fewer than 20 percent of Spaniards now attend Mass regularly.