KIM LAWTON, guest anchor: Science and religion are sometimes at odds over the environment, but one prominent biologist is pleading for both to work together in order to protect the earth’s biodiversity — the many species of plants and animals that scientists say are at risk. E.O. Wilson is the author of a recent book, THE CREATION. He spoke with Bob Abernethy.

ABERNETHY: The thin layer of life covering the earth’s surface is made up of perhaps 10 million species of plants and animals, maybe more, and many scientists say those forms of life are in mortal peril. One of those sounding the alarm is biologist and retired Harvard University professor E.O. Wilson.

Dr. E.O. WILSON (Biologist and Author, THE CREATION: AN APPEAL TO SAVE LIFE ON EARTH): I want us to save the creation — not just care about it, but to save it.

ABERNETHY: Wilson is a broadly learned man with many honors, among them two Pulitzer Prizes, one for his lifework — the study of ants. 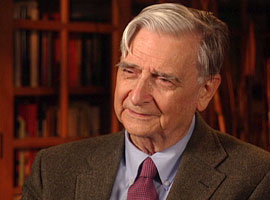 Dr. WILSON: Here is a typical drawer of hundreds if not thousands of specimens.

ABERNETHY: His mission now is to protect all the Earth’s species. The greatest threat to biodiversity, says Wilson, is humankind’s appetite for more and more lumber and food and minerals and space to support six-and-a-half billion people, on the way to nine billion. Wilson says it is human over-consumption that’s the greatest threat to other species, and therefore a problem for us, too.

Dr. WILSON: We are threatened by the immense loss of future scientific knowledge, of future products that could enrich humanity and give us a higher quality of life. But the loss that I care about most is in our — in spiritual enrichment, in living in the magnificent original environment in which humanity was born.

Dr. WILSON: Thirty trillion dollars worth of services, scot-free to humanity, every year.

ABERNETHY: Wilson says scientists have identified 25 so-called hotspots — two-and-a-half percent of the earth’s land surface — in which nearly half of all the plant and animal species have been found. He wants the world to spend $30 billion to protect those ecosystems, in his words to “throw an umbrella over them.” The same species in other places might be endangered, but those in the hotspots would survive. 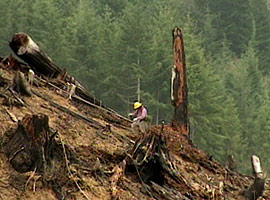 Wilson has long been a secular humanist, but he was raised a Southern Baptist in Alabama, and he understands religion’s power. So his new book, THE CREATION, is addressed to an imaginary Southern Baptist minister.

Dr. WILSON (From THE CREATION: AN APPEAL TO SAVE LIFE ON EARTH): Pastor, we need your help. The Creation is the glory of the earth. Let’s see if we can’t get together on saving it, because science and religion are the most powerful social forces on Earth. We could do it.

ABERNETHY: Wilson’s imaginary pastor could be Richard Land, a Southern Baptist minister who is the chief spokesman for the Southern Baptist Convention. He’s a radio broadcaster and the author of his own book on the environment, THE EARTH IS THE LORD’S.

Dr. RICHARD LAND (President, Southern Baptist Convention Ethics and Religious Liberty Commission): Genesis chapter 1 tells us that God put man in charge under his headship. Human beings have dominion and are given dominion. But then that’s tempered by Genesis chapter 2, where man is put into the Garden to till it and to keep it. We’re not to just worship nature in its pristine form. We have a divinely mandated responsibility to both develop the earth for human betterment and to protect it and to guard it and keep it and exercise creation care.

ABERNETHY: Land accuses Wilson of being too concerned about wildlife and not enough about humanity. 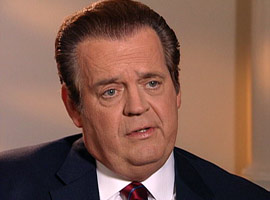 Dr. LAND: He looks upon human beings as an alien species to the habitat of nature and that we are the ones that are destructive and that we have been a catastrophic event. Nature would have been far better off without human beings. As a Christian, we believe that God created the creation for humankind. So while we are to give respect to all life, we must treat human life with reverence. And there is in Christian theology a hierarchy of species, and there is a firebreak between human beings and the rest of creation. It is human beings that God gave a soul.

ABERNETHY: And protecting other species?

ABERNETHY: Land says millions of people, especially the very poor, would be devastated by some proposals for protecting the environment. Wilson insists that biodiversity could be protected without hurting humans.

Dr. WILSON: It would increase our standard of living if we did it sensibly with less material and energy consumption and conservation of the rest of life. We can actually increase the productivity of the world while saving all of the, or most of the remaining species.

ABERNETHY: Wilson sees a problem in what he says is the implication for some Christians of the belief that Christ is coming again. 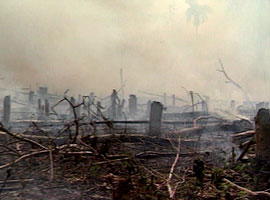 Dr. WILSON: And that therefore there isn’t a lot of value in paying any attention to what we do to the Earth. We could go ahead and tear it all to hell and back, and I do consider that, frankly, as a gospel of despair, a view of humanity and our place on this Earth that is indefensible.

Dr. LAND: I personally have never met an evangelical Christian who believes that. I’m beginning to wonder if it’s a mythic figure. I believe that history will culminate in a radical second advent of Jesus Christ to judge the quick and the dead and to redeem his creation and humankind. But I specifically repudiate that you can draw from that that we can ignore the biblical admonitions and the biblical commands to exercise creation care. I think that is a false theology.

ABERNETHY: And Wilson’s idea of setting aside those 25 hotspots to protect their ecosystems?

Dr. LAND: As long as it can be done by not severely damaging the human beings who are in that eco-culture.

ABERNETHY: Land acknowledges that protecting the environment is becoming a high priority issue for many evangelicals.