More than a month has passed since North Korea’s reportedly successful underground test of a one-ton nuclear device. Pyongyang has claimed that North Korea would never use atomic weapons first and that it remains “committed to the denuclearization of the Korean peninsula,” but religious thinkers and scholars who specialize in issues of contemporary terrorism and nuclear proliferation are thinking with new urgency both about nuclear danger and the direction of U.S. policy.

Charles B. Strozier, a psychoanalyst, professor of history, and director of John Jay College’s Center on Terrorism at the City University of New York, says he doubt seriously whether North Korea has any immediate intention to use its apparent new-found power for widespread destruction. Strozier, who is best known for his 1994 book APOCALYPSE: ON THE PSYCHOLOGY OF FUNDAMENTALISM IN AMERICA, says countries that have desired in the past to get the bomb use it instead “to enhance their power and prestige.”

But North Korea’s provocation is grave nonetheless, according to Strozier. Though he doubts any abrupt action from the Pyongyang regime, he also warns that “the existence of the weapons really brings into the world the power of God, and therefore it creates a kind of a yearning for that incredible power they represent. The mere existence of the weapons in the world evokes a tendency toward creating violence on a scale that rivals that of God.” 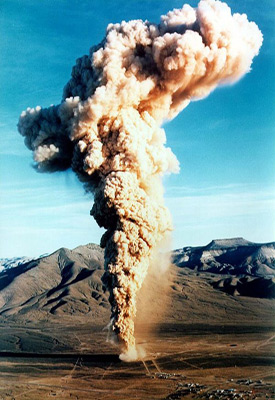 “They shouldn’t even be called weapons,” Strozier states starkly. “They should be called instruments of genocide.”

Kim Jong Il’s motivation for acquiring weapons of mass destruction is clear to David Cortright, a founder of the National Religious Partnership on the Nuclear Weapons Danger and a Catholic peace activist who has taught and written widely on nonviolence. “What they want is a normalization of political and economic relations with the United States,” says Cortright. “They’ve said at times very explicitly that they would be prepared to give up their nuclear and missile programs in exchange for guarantees of security and normal relations with the United States.”

The Bush administration countered rumors of a second nuclear test this fall the by applying pressure on North Korea in the form of tougher financial and weapons sanctions. In addition, a new round of six-party talks on ending North Korea’s nuclear ambitions will reportedly resume in December. But scholars have mixed reactions both to sanctions and to multilateral talks. According to Rick Nutt, a religion professor at Muskingum College in Ohio who has written specifically about the Presbyterian Church and issues of national security and nuclear weapons, “There need to be some restrictions, some effort to get North Korea to alter its behavior. North Korea has sought bilateral talks with us. Perhaps it’s time for the U.S. to engage North Korea not only multilaterally, but also bilaterally. We can take steps that we haven’t necessarily wanted to take that can help to diffuse the situation.”

Cortright says the sanction measures are largely incomplete. “What’s missing with the sanctions package is that it should be accompanied by a gesture of negotiating. Then you might have a positive result,” he suggests. Cortright also disapproves of Washington’s resistance to engage North Korea in bilateral talks. “It’s a profound failure of moral imagination, because it disregards all that we know in human experience about how to reach agreement and how to settle differences,” he says. “Without that dialogue we only have the option of an enemy status. The fact that we are irresponsible in our use of power and unwillingness to negotiate with the other side strikes me as a policy that is highly unethical in that it is increasing the danger.”

Despite Kim Jong Il’s apology for the October test, his denunciation of the rumors of a second detonation, and the likelihood of new talks, prospects for the future remain dim, according to some scholarly assessments.

“By no means do I think that the U.S. is without blame,” says Nutt. “Fundamentally it’s difficult for us to condemn nuclear weapons in another country when we have them, when we have had them for over 50 years and we remain the only nation to have detonated a nuclear device against another people.”

Historically, religious voices in America have been strongly outspoken against the proliferation of nuclear weapons, says Cortright, citing in particular the influence of the U.S. Catholic bishops’ 1983 pastoral letter, THE CHALLENGE OF PEACE. “It had a huge impact on the press and on the Reagan administration,” says Cortright. The letter supported total abolition of the existence of nuclear weapons. But there has been no official statement from the Catholic bishops since either North Korea’s July test firing of a long-range missile and some medium-range ones or the October underground test.

The Catholic position is one that crosses denominational lines, according to Nutt. “Within mainline Protestantism, the general consensus is that nuclear weapons are too horrible to use and that we ought ultimately to eliminate them,” says Nutt, who cites Jewish Scripture as the basis, at least in part, for a Christian position in support of nonproliferation. In Deuteronomy 30:19, says Nutt, God placed before the Israelites the option to choose life or death and said, “Choose life, so that you and your descendants may live.”

Strozier recognizes the responsibility and power of that option. “Nuclear weapons are the gold standard of apocalypse,” he says. “Only nuclear weapons have the potential to end human life, end human existence. … With every step of increasing proliferation, the world becomes more terrifying, more spiritually barren and the kind of place where there’s this scary increase in the culture of fear.”

But knowledge should accompany fear, says Nutt, who recommends that religious communities need to understand the North Korea situation in order to react appropriately. “There is something to fear,” he admits. “This is a very real, very dangerous issue and therefore a healthy fear and a realization of the danger is required. One of the ways you deal with fear is to become more knowledgeable, because knowledge gives you a sense of how to deal with these situations.”

Religious thinkers hope the situation in North Korea will unite faith communities to ultimately have an effect on the issue of proliferation. “Encouraging dialogue among Jews, Muslims, and Christians can only be to the good, especially in this era when we see so much conflict that is carried out in the name of religion,” says Cortright. “Maybe we can get religious leaders to start the dialogue. If people of faith can start the process, maybe that will be an encouragement for political leaders to do the same.”

Nutt identifies an overriding ethical agenda that encompasses both secular and religious groups, and he describes it in the same biblical terms that he says underlie faith-based opposition to nuclear proliferation. “There’s this element of the ultimate destruction of nuclear weapons. We can choose the path that can lead ultimately to the destruction of life as we know it, or we can choose life. We need to choose life.”

Cara Beale, a senior at Lee University in Cleveland, Tennessee and a participant in the Washington Journalism Center program, is an intern at Religion & Ethics NewsWeekly.