Read an excerpt from THE CREATION: AN APPEAL TO SAVE LIFE ON EARTH by E.O. Wilson (Norton, 2006), written in the form of a letter to a Southern Baptist pastor: 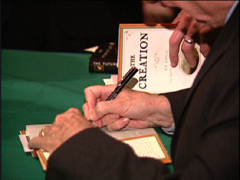 I’ve tried not to water down in any way the fundamental difference between science and mainstream religion concerning the origin of life. God made the Creation, you say. This truth is plainly stated in Holy Scripture. Twenty-five centuries of theology and much of Western civilization have been built upon it. But no, I say, respectfully. Life was self-assembled by random mutation and natural selection of the codifying molecules. As radical as such an explanation may seem, it is supported by an overwhelming body of interlocking evidence. It might yet prove wrong, but year by year that seems less probable. And it raises this theological question: Would God have been so deceptive as to salt the earth with so much misleading evidence?

Much as I would like to think otherwise, I see no hope for compromise in the idea of Intelligent Design. Simply put this proposal agrees that evolution occurs but argues that it is guided by a supernatural intelligence. The evidence for Intelligent Design, however, consists solely of a default argument. Its logic is simply this: biologists have not yet explained how complex systems such as the human eye and spinning bacterial cilium could have evolved by themselves; therefore a higher intelligence must have guided the evolution. Unfortunately, no positive evidence exists for Intelligent Design. None has been proposed to test it. No theory has been suggested, or even imagined, to explain the transcription from supernatural force to organic reality. That is why statured scientists, those who have led in original research, unanimously agree that the theory of Intelligent Design does not qualify as science.

Some have suggested that scientists have formed a conspiracy to halt the search for Intelligent Design. There is no such conspiracy. There is only agreement among experts that the hypothesis has none of the defining qualities of science. To think otherwise is to misunderstand the culture of science. Discoveries and the testing of discoveries are the currency of science, its irreplaceable silver and gold. Challenges to prevailing theory on the basis of new evidence are the hallmark of science. If positive and repeatable evidence were adduced for a supernatural intelligent force that created and guided the evolution of life, it would deservedly rank as the greatest scientific discovery of all time. It would transform philosophy and change the course of history. Scientists dream of making a discovery of this magnitude!

Without such an event, however, it is a dangerous step for theologians to summon the default argument of Intelligent Design as scientific support for religious belief. Biologists are explaining the previously unexplainable — providing evolutionary steps for the autonomous origin of ever more complex systems — at an accelerating pace. What is to become of the hypothesis of Intelligent Design as the remaining unpenetrated systems decline toward the vanishing point? The hypothesis will be dismissed and with it credibility of the idea of science-based theology. The odds powerfully favor such an outcome. In science, as in logic, a default argument can never replace positive evidence, but even a sliver of positive evidence can demolish a default argument.

You and I are both humanists in the broadest sense: human welfare is at the center of our thought. But the difference between humanism based on religion and humanism based on science radiates through philosophy and the very meaning we assign ourselves as a species. They affect the way we separately authenticate our ethics, our patriotism, our social structure, our personal dignity.

What are we to do? Forget the differences, I say. Meet on common ground. That might not be as difficult as it seems at first. When you think about it, our metaphysical differences have remarkably little effect on the conduct of our separate lives. My guess is that you and I are about equally ethical, patriotic, and altruistic. We are products of a civilization that rose from both religion and the science-based Enlightenment. We would gladly serve on the same jury, fight the same wars, sanctify human life with the same intensity. And surely we also share a love of the Creation.

I hope you will not have taken offence when I spoke of ascending to Nature instead of ascending away from it. It would give me deep satisfaction to find that expression as I have explained it compatible with your own beliefs. For however the tensions eventually play out between our opposing worldviews, however science and religion wax and wane in the minds of men, there remains the earthborn, yet transcendental, obligation we are both morally bound to share.