BOB ABERNETHY, anchor: Now a report on the divisions over immigration. With Congress unable to agree on immigration law reform, many local governments are trying to act on their own to discourage illegal immigrants from settling in their towns. Some say that’s just protecting their communities, but others call it racism. A federal court has ruled that an anti-immigrant ordinance in Hazleton, Pennsylvania is unconstitutional, but that decision is being appealed, and until it’s settled other local governments are acting. One place in which opinion has been sharply polarized is Northern Virginia, as Lucky Severson reports.

CHRIS PANNELL (Resident, Manassas, Virginia, speaking during meeting of the Loudoun County Board of Supervisors): I have to tell you this is one of the happiest days in my life.

LUCKY SEVERSON: Chris Pannell is a fourth-generation resident of Manassas, Virginia and she is happy, to say the least, that the county Board of Supervisors approved a tough new measure to crack down on illegal immigrants.

Ms. PANNELL: I’ve certainly prayed about this matter for many, many years. It’s just devastating. It’s heartbreaking, too.

SEVERSON: She is referring to the negative impact she thinks the influx of immigrants has had on her community, especially illegal immigrants.

Ms. PANNELL: I feel that all of these things — the crowding of our schools, the trash, overcrowding in the house — all together are just changing quality of life for us, and I can’t put a price tag on the quality of life that’s lost here.

SEVERSON: Local and state governments have approved hundreds of tough new immigration resolutions since Congress failed to pass national legislation. But some religious leaders, like Father Robert Menard, say they are deeply troubled by the tone of the debate — that it goes against the precepts of all the major faiths. Father Menard is also disturbed about what is not being discussed.

Father ROBERT MENARD (St. Francis of Assisi Parish, Triangle, Virginia): I think one of the great sins is the silence that is echoing around this topic. The whole discussion seems to be around the question of law. No one’s talking about the values to care for those who are being oppressed — to treat the alien in the land with respect and dignity.

JOHN STIRRUP (Supervisor, Gainesville District, Prince William County, Virginia): In terms of where we are seeing a lot of the complaints about illegal immigration.

SEVERSON: Supervisor John Stirrup says the outcry he hears from constituents has everything to do with the law. He introduced the Prince William County resolution, in his words, “to stop the bleeding.”

Mr. STIRRUP: We have literally millions of illegal aliens crossing into — crossing our border every year with no stem to the flow.

SEVERSON: John Stirrup’s resolution is said to be one of the strictest of its kind in the country.

Mr. STIRRUP: Many folks have raised the question is this going to be a door-to-door search or are people going to be stopped on the street and asked for their papers? And that’s the furthest thing from the truth.

SEVERSON: The resolution is being studied to determine if it’s constitutional, but as it stands now the new law says anyone who is seeking public services can be questioned about their immigration status. If they’re without proper ID, they can be deported. The same is true with a minor traffic violation.

Mr. STIRRUP: An officer stops you for an infraction of the law, whether it’s a violation of federal, state or local law, and the officer has probable cause to believe that you are here illegally, he may ask you that question. And if the answer’s affirmative, then he may detain you.

SEVERSON: Father Robert Menard says the anti-immigrant fervor is creating a culture of fear on both sides.

Fr. MENARD: People fear to go across their street, or to knock on the door and to get to know their neighbor, whether they are from one culture of another. And so the suspicion builds.

SEVERSON: There was a palpable fear at this labor center in Herndon, Virginia. Dozens of Hispanics, mostly undocumented, show up here every morning to find a job where they can earn $80 to $100 a day.

Abel has been in this country five years trying to support the five children he couldn’t support in El Salvador. He says the jobs are drying up because employers are afraid.

Jaime’s visa has expired. He says it’s very hard to be away from his six kids, but he could barely feed them when he was in Peru. He thinks Americans are decent people who don’t understand his situation.

Edwin Andrade, a local church pastor, says the controversy has left Hispanics under a cloud of suspicion, judged guilty by association, by the color of their skin — even those here legally.

(to Pastor Andrade): Does it concern you that people would look at you and say you could be an illegal?

EDWIN ANDRADE (Pastor, Nueva Rivera Presbyterian Church, Sterling, Virginia): Yeah. Does it concern me? Yeah, to a degree. It has happened. It happens all the time.

SEVERSON: Edwin and other church volunteers sponsor a lunch for the migrant workers and offer some comforting words the workers rarely hear.

SEVERSON: Jose and his wife are here illegally. Their child was born here. Jose says he came from El Salvador to escape poverty — that he does jobs most legal residents wouldn’t do. He has a message for Americans.

JOSE (through translator): I would like them to know that there is no Hispanics here who has come to hurt you.

Ms. PANNELL: I hear of crimes being committed around here. You know, I’ve heard of several people who have taken their trash out getting robbed at knifepoint. 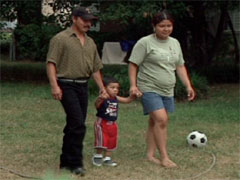 Mr. STIRRUP: I think what people are concerned about is the lawlessness that has come with illegal immigration in the area, and it starts with those homes that are grossly overpopulated.

SEVERSON: Chris Pannell took us on a tour of her neighborhood.

Ms. PANNELL: When you see 20 people on a porch like, for example, like back there at a time, it’s pretty telling that’s probably not your typical family.

SEVERSON: You say you have more rats in the neighborhood?

Ms. PANNELL: Yeah, we’ve never seen rats in the neighborhood until recent months when the trash has gotten up really tall.

Fr. MENARD: I think it’s important that we name the sin that is part of every community and every tradition. I’m speaking specifically of racism.

Ms. PANNELL: It’s not about race at all. It’s very simple. It’s about legal versus illegal.

SEVERSON: One thing that riles critics of illegal immigrants is that they send such a large amount of their earnings back home, reportedly as much as $45 billion last year.

Pastor ANDRADE: The fact is that a lot of people who are undocumented do pay taxes, because the IRS provides a temporary tax number which they can contribute to the system. 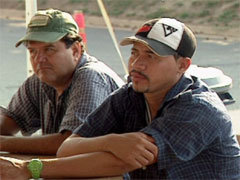 OMAR (through translator): When I came to this country, I started paying taxes right away. I have always paid my taxes.

SEVERSON: Omar and Jesaina have been in the U.S. seven years. They have a young son and another child on the way.

(to Omar): If it gets too bad, will you go back to Honduras?

OMAR (through translator): Eventually we would return, but our intention is to fight to stay here because we have made an important part of our life here. .

SEVERSON: One reason so many immigrants have moved to Northern Virginia is because of the explosive growth of new construction. Contractors are often desperate for workers.

(to Mr. Stirrup): What do you do with employers who employ illegals?

Mr. STIRRUP: Well, that was not part of our resolution. We anticipate resolutions beyond what we’re doing now.

SEVERSON: Until recently, Omar had a full-time job which he lost when his employer became afraid that he might be visited by immigration authorities. These days, Omar can barely find day work.

OMAR (through translator): I feel that it is a great injustice to be treated as we are being treated, because we come here to work hard. We give a lot back to this country.

PANNELL: I’m still compassionate. But they’ve broke the law, and I still believe those people need to go back home.

SEVERSON: Father Menard says among Christian, Jewish, and Islamic traditions civil law has always been subservient to values and judgment.

Fr. MENARD: If your family is struggling to survive, then to steal a piece of bread is okay. It’s not only okay it’s something that you’re required to do by your moral responsibility to provide for your family.

SEVERSON: Jose says he had heard about the American dream before he came here.

(to Jose): Do you think you will find it?

SEVERSON: The county recently closed down its day-work center, so it’s even less likely that Jose and many others will find the American dream in this country as long they’re here illegally.

ABERNETHY: All those on camera in that story gave us permission to use their pictures.