BOB ABERNETHY, anchor: Back in the 1970s a young graduate of an evangelical college, a white man from Iowa, moved into a high-crime area of Chicago called Lawndale, a mostly African-American neighborhood. Some of the young people there told him they wanted to start a church. So he helped them do it, with enormous effect. Robert Jordan reports.

JOSEPH ATKINS, JR. (Associate Pastor, Lawndale Community Church, during baptism): We now baptize you in the name of the Father, the Son and the Holy Spirit . . . 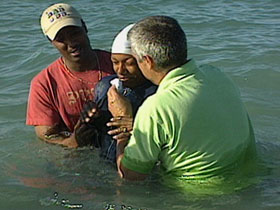 ROBERT JORDAN: Against the Chicago skyline, members of the Lawndale Community Church have come to the shore of Lake Michigan to baptize 18 of their congregants. For many of them, the chill waters are a new experience.

This is their neighborhood, five miles from the lake. It has long been one of the city's most troubled areas. The poverty rate: 45 percent; unemployment: 26 percent. But in spite of the vacant lots and the boarded-up buildings, this has become a close-knit community whose residents say they have real hope for the future.

Coach It is the work of the church that has helped transform Lawndale. Thirty years ago, Pastor Wayne Gordon, then a recent graduate of evangelical Wheaton College, came here to coach high school football and wrestling. Joe Atkins was one of his athletes.

Pastor ATKINS: He started to invite us to his house after school just to have Bible studies, and through that we began to understand who Christ was and how he could effect change in our life.

JORDAN: As an inducement, Gordon brought weight-training equipment for his athletes. But none of them was going to church.

ANDREW MOORE: He asked us why we weren't going to church. We went through the whole spiel about not having the clothes, not having the money. And then we decided -- he decided -- well, maybe we'll give this thing a shot and reach out to the community, to the unchurched. And so we started our own church.

Pastor ATKINS: We didn't want to be just a part of a church. And, like I said, we wanted to be a church that believed in the word of God, that God's word was true in terms of loving God and loving people, and then to love your neighbor as you would love yourself.

JORDAN: Gordon moved onto this street with his new wife. In their first three years of marriage, the house was broken into no less than 10 times. 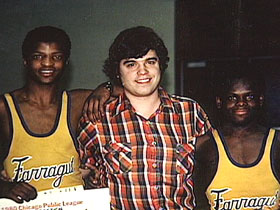 Mr. MOORE: I mean, at the beginning, you know, Coach was not a well-liked person in the neighborhood. Sometimes he'd walk the streets and get called many a different name.

JORDAN: Gordon stayed and raised his family here. Lawndale Community Church would grow from a handful of teenagers to a congregation of a thousand people. While saving souls, its mission was also to save the neighborhood.

JORDAN: Quality housing became a priority. The church has helped 200 families become homeowners for the first time. It bought abandoned or tax-delinquent buildings for as little as a dollar, rehabbed them and sold them to families at moderate prices, and gave them courses in how to be a homeowner.

KIM JACKSON (Executive Director, Lawndale Christian Development Corporation): How to make repairs to their home once they're in their home, and also just to understand what it means to live in a community and how to be productive neighbors in our community.

Pastor ATKINS: For over about 30 years since I've been here, I never knew anyone that owned their own home that they built from the ground up, no.

JORDAN: This is remarkable. 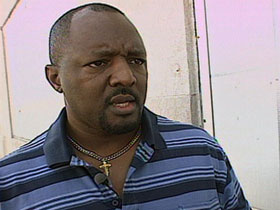 JORDAN: You hear a lot of gunshots around like that?

Pastor ATKINS: A lot of gunshots.

JORDAN: These men have either been in prison, or on drugs, or both. Now they are back on the streets of Lawndale, but they are also in the church. They belong to a church ministry. It is called Hope House.

ANTOINE (Speaking to group): I did everything. You know, I sold drugs. I gang banged, robbery, all that stuff. And I came here, and it was hard for me to really deal with, you know, change.

JORDAN: The church takes these men in for months of Bible study and counseling and gives them a chance to start over.

ANTOINE: After six, seven months of being here I was hired, and I was put on payroll -- getting paid for it. It was a joy, man, it was shocking. I'm 35 now. I went through almost all of my 20s locked up, never understanding work, what going to work was about. I started getting paid. I saw my first paycheck with my name on it.

JORDAN: Some of the men work at a restaurant called Lou Malnati's. Ten years ago the church persuaded the restaurant chain to open up in Lawndale, the only place around where families can sit down to a meal. Malnati's offered to turn its profits over to church programs. There have been no profits, but the restaurant is still here. To promote black-owned businesses in the area, the church encouraged two of its members to open this barbeque carry-out.

RUSSELL: It's going to take more guys like myself and my cousin here, to start it, you know, to start it, because we're pretty much the only ones doing this type of thing here.

JORDAN: Kelly Smith grew up in Lawndale, went away to college, but then returned. He is a project manager and organizer for the church. The church has groomed him to be a neighborhood leader.

KELLY SMITH (Project Manager, Lawndale Community Church): To be honest with you, I would dare to say if Lawndale wasn't present in North Lawndale, I could very well have turned out like a lot of my friends.

JORDAN: Which is what? 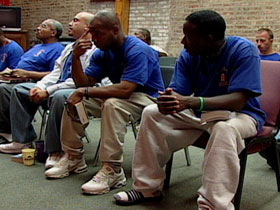 Mr. SMITH: Locked up in jail, incarcerated, or deceased.

JORDAN: Nothing has been more critical to the success of the church's outreach than this converted car dealership across the street. It provides what so many impoverished communities lack -- good, basic health care. The Lawndale community health center opened in 1984 with only one exam room. Now they have over 30, at three locations around the neighborhood. They treat over 100,000 patients a year with a holistic approach toward prevention and patient care.

MARIA VILLAREAL (Patient): The physicians here are just wonderful. They take the time to get to know you. They sit there. They talk to you, see if anything's wrong.

JORDAN: Its pharmacy writes 400 to 600 prescriptions a day. With federal funding the prescriptions cost a fraction of what they would elsewhere. The medical team considers this one of the best faith-based health centers in the country. It attracts skilled professionals from all over. But much of the staff is community-based. Pharmacy technician Luis DeJesus came from a street gang.

LUIS DEJESUS (Pharmacy Technician, Lawndale Christian Health Center): Before I got saved, I was on the streets of Chicago gang-banging, selling drugs, dancing. Name it, I was there.

JORDAN: Church members built the place with the help of grants and outside contributions. They dug out the foundation for the gymnasium. The gym floor itself was paid for by the Chicago Bears. The executive director of the health center is Dr. Arthur Jones. He and others even make house calls when necessary.

Dr. ARTHUR JONES (Executive Director, Lawndale Christian Health Center): The staff that are here are here because they want to live out their faith by meeting the needs of the poor. I've lived in the neighborhood for 27 years, so this is my -- my patients are also my neighbors and my friends.

JORDAN: Pastor Gordon has no illusions about the challenges facing his church. One of those is keeping the residents in the neighborhood.

Dr. GORDON: We want every human being that lives here to be able to stay here, but to have a quality of life that will make a difference in their life. 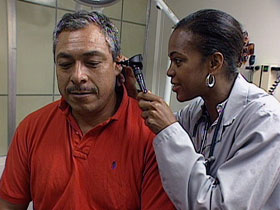 Mr. MOORE: After I got out of high school and got married and I moved out of the neighborhood. I didn't want to bring my kids up in a neighborhood, like I said, where I had to be mindful about watching them all the time. I wanted them to be at peace, where they could go outside. A lot of people have moved back to the neighborhood because of that sense of freedom, the sense of being able to raise your kids where you were raised.

JORDAN: Gordon says he has no ideas of his own, that he just listens to the ideas of the people who live here.

Dr. GORDON: When we fail we just pick up and get going. As a coach you know that. Not every play is successful.

JORDAN: There have been a lot of successful plays here so far, which is why Lawndale Community Church feels positive about the future of this community.

For RELIGION & ETHICS NEWSWEEKLY, this is Robert Jordan in Chicago.

In the 1970’s, Evangelical Pastor Wayne Gordon moved into a high-crime area of Chicago. Members of the community told him they wanted to start a church, so Gordon founded the Lawndale Community Church.